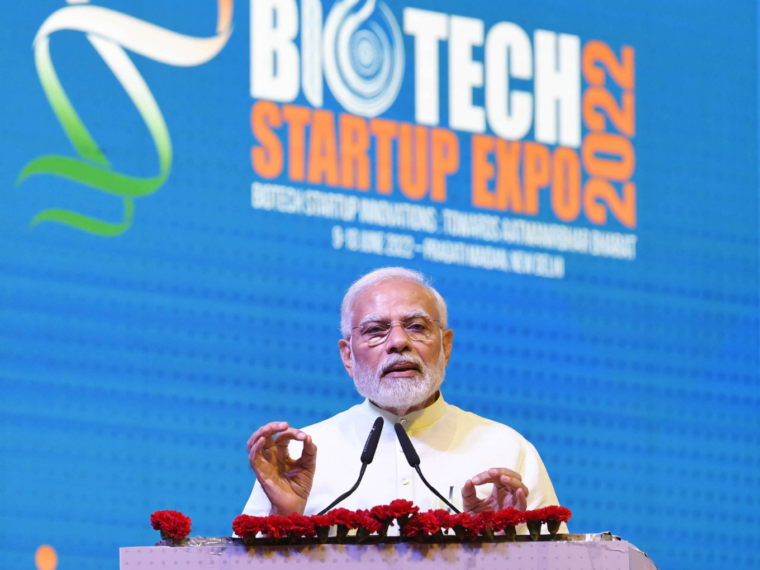 India is seeing the same respect and reputation for its biotech sector and bio professionals as it saw for its IT professionals in the past decades: PM Narendra Modi

Number of investors in biotech sector has increased by nine times since 2014, while the funding has risen by seven times during the same period, said Modi

Prime Minister Narendra Modi on Thursday (June 9) said that every 14th startup in the country is from the biotech sector and nearly 1,100 biotech startups have emerged in the country in the last year.

“We are witnessing the same respect and reputation for our biotech sector and for the bio professionals of India as we saw for our IT professionals in the past decades”, the prime minister said in his address during the inauguration of the Biotech Startup Expo 2022 in New Delhi.

Union Ministers Piyush Goyal, Dharmendra Pradhan and Jitendra Singh also attended the event. Various stakeholders from the industry as well as experts and investors were also among those present at the event.

“More than 5 thousand startups are associated with biotech. Of these, 1,100 biotech startups emerged in the last year itself,” Modi said.

He further added that the number of investors in the sector has increased by nine times since 2014 under his government, while the funding has risen by seven times during the same period.

“India’s bio-economy has grown 8 times in the last 8 years. We have grown from $10 billion to $80 billion. India is not too far from reaching the league of top-10 countries in biotech’s global ecosystem”, he said.

PM Modi also unveiled an e-portal of 750 biotech products at the event on Thursday.

The prime minister also touted the diverse population and climatic zones, along with a big talent pool, as the drivers of the biotech sector in the country.

The Expo is a two-day event that will be held in the national capital from June 9 to June 10. The event has been organised by the Department of Biotechnology in collaboration with the Biotechnology Industry Research Assistance Council (BIRAC). The theme of the Expo is ‘Biotech Startup Innovations: Towards AatmaNirbhar Bharat’.

The Expo will showcase 125 biotech startups incubated and supported by BIRAC and the Department for Promotion of Industry and Internal Trade (DPIIT). As many as 300 stalls have also been set up at the event to showcase biotechnology products across a slew of domains.

The Expo aims to provide a platform to connect investors and entrepreneurs in one place.

Recently, the government also launched a single national portal for biotech startups and researchers in the country.

The space is populated by major players such as Biocon and Serum Institute of India as well as startups like MedGenome.

Recently, biotech startup Zaara raised an undisclosed amount of funding from US-based Transcend International. In May, BIRAC announced a partnership with the Indian Angel Network (IAN) to launch an angel investor network, BioAngels, to fuel the growth of startups in the space.

Bengaluru-based Bugworks Research raised an $18 Mn Series B1 round in February this year which was led by Lightrock India. In January, Epigeneres Biotech raised $6 Mn in a Series B funding round from Kotak Investment Advisors, Satya Capital’s Moez Daya, and LetsVenture Angel Fund.