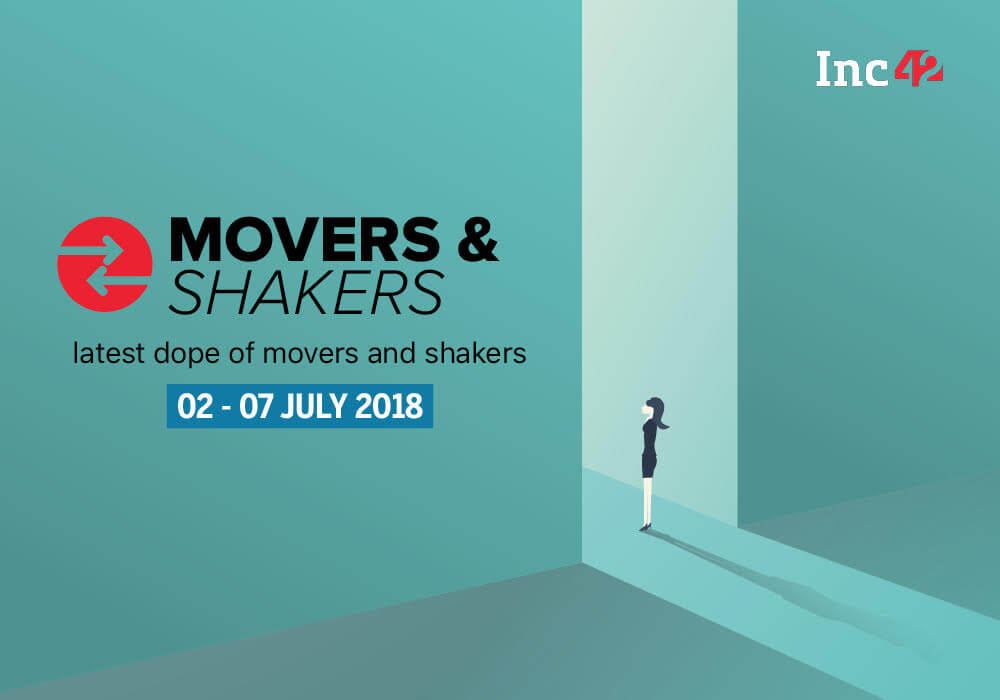 This week, PayPal unveiled its plans to continue with its commitment to India. It has identified the country as a key growth market and plans to hire 600 techies by December 2018. The company has tech centres in Chennai and Bengaluru, with a total headcount of 1,700. The fresh and lateral hires PayPal plans to make will work in domains like artificial intelligence (AI) and machine learning (ML).

Let’s have a look at some other movers and shakers in the Indian startup ecosystem.

Payments Council of India has appointed Vishwas Patel as its new Chairman. It has also appointed Loney Antony as its new Co-Chairman.

In his new role, Vishwas Patel will be responsible for creating a sustainable environment conducive to the development of the digital payments industry in India. Prior to this role, Vishwas was the Director of Infibeam Avenues Limited.

Loney Antony, on the other hand, was earlier working as the managing director of Hitachi Payment Services and brings over 32 years of experience in the financial services industry.

The newly appointed members will work towards achieving the target of growing the volume of digital transactions to 30 Bn for the financial year 2018-19. They will further lay focus on solving micro issues faced by the industry such as Implementation of Interoperability of Prepaid Payments Instruments, reimbursement issues related to Debit Card MDR for transactions upto INR 2000, and simplification of outward remittance regulations among others

In his new role, Vivek will be responsible for the operating units of the company. He will work towards accelerating the mission of making the lives of consumers more convenient and hassle-free.

He will also be in-charge of developing and executing Swiggy’s strategic direction and priorities to drive organisational growth and operational excellence.

Prior to this, Vivek Sunder was working as the Managing Director at P&G, East Africa, and brings with him over 20 years of experience.

He holds a BE in Computer Science from Netaji Subhas Institute of technology and an MBA from IIM Calcutta.

Indian Federation of Sports Gaming (IFSG) has appointed John Loffhagen as its President.

In his new role, John Loffhagen will work towards creating a thriving ecosystem for sports gaming users and operators. He will lay guidelines for a common set of industry practices, dissemination of know-how to members and assisting with potential arrangements with right holders for the benefit of members.

Prior to this, John has played an important role in establishing the IPL T20 cricket and ISL football tournaments. He used to frame rules and governance structures of these events.

John is trained and qualified as a lawyer in the City of London where he spent eight years practicing corporate and commercial law. He is also associated with a UK law firm, Onside Law as a consultant.

IFSG will cooperate with important industry stakeholders to create a common set of practices, drive self-regulation, which will help in protecting user and operator interests. IFSG will be able to frame industry benchmarks with strong governance.

Currently, IFSG has 11 members that are working together to create standardised best practices and drive self-regulation. Some of the members include Baadshah Gaming, Vinfotech, Fantain, etc. StarPick, who recently launched its India operations during the T20 season, is the latest to come on board.

Zomato has appointed Mohit Gupta as its new Chief Executing Officer (CEO). The appointment is in line with Zomato’s plans to strengthen its leadership team to accelerate growth of the business. It is working on the mission – ‘better food for more people.’

Prior to this, Mohit was working with MakeMyTrip, where he was responsible for the P&L of online business and comes with over 20 years of experience.

Mohit has played a key role in building out the marketing function, the successful IPO, leadership in Holidays business and mobile first approach at MakeMyTrip.

Mohit holds a B.E. in Mechanical Engineering from Sardar Patel University and a PGDM in Marketing from IIM Calcutta.

Publicis.Sapient, the digital business transformation hub of Publicis Groupe, has appointed Tilak Doddapaneni as its new Global Head of Engineering. It has also appointed Rakesh Ravuri as its new Chief Technology Officer.

Tilak Doddapaneni has been hired into the newly created position of Global Head of Engineering at Publicis.Sapient – joining from Tesco, where he was Online Engineering Director.

In his new role, Doddapaneni will lead the entire technology delivery community across Publicis.Sapient globally.

In addition to client success and engineering and delivery excellence, he will focus on the talent development, performance metrics, and breakthrough engineering practices required by digital business transformation clients in their modern test and learn environments.

On the other hand, Rakesh Ravuri, who has held a succession of senior engineering roles at Amazon, will join as Chief Technology Officer for programming languages and cloud and Global Head of Engineering for Retail.

He will play a key leadership role in Publicis.Sapient’s extensive operations in India. Ravuri will report to Doddapaneni. Both Doddapaneni and Ravuri are Sapient alumni.

Ravuri, brings a wealth of knowledge in cloud platforms, service design and agile engineering gained as Director of Software Development at Amazon. Ravuri built the engineering team responsible for the software systems for Amazon’s new logistics business to launch ship.amazon, delivering millions of packages for its sellers.

Ecosystm, a technology research and advisory company has appointed IT industry veteran Neelam Dhawan as Board Advisor.

In her new role at Ecosystm, Neelam will provide ongoing counsel to the board, in concurrence with her existing roles as a board member at Dutch technology giant Royal Philips, and ICICI Bank Limited India.

Globally recognised as one of the Most Powerful Women in Business by titles including Fortune, Forbes and Business Today, Neelam has played an instrumental role in shaping the IT industry in India.

Neelam brings a proven track record in managing transformation across industries, including banking and finance, telecommunications, manufacturing, healthcare and government.

Founded in 2016, private equity-backed Ecosystm democratises data and insights making it available and accessible to technology buyers and vendors globally using a ‘research as a service’ model. It focuses on offering transparency and autonomy to users, allowing them to consume data in a way that is affordable, and contextualised to their needs.

Cab aggregator Ola, is strengthening its presence in Australia with the appointment of Simon Smith as managing director.

In his new role, Simon will head and develop the leadership team and play a pivotal role in building Ola’s presence including strategy, marketing, product development, customer service, and engagement with driver-partners and other stakeholders.

Prior to joining Ola, Simon’s previous career stints include Chief Executive Officer of eBay Australia, Non-Executive Director of Sportsbet, VP of Virtual Offices at Servcorp and a consultant at McKinsey and Company.

Ola is currently available in Perth, Sydney, Melbourne, Canberra, Brisbane and the Gold Coast and shortly will launch in Adelaide. Since launching in January, the service has received a positive response from driver-partners with close to 40,000 registrations. By enabling driver-partners to provide the best experience possible, customers, in turn, will be delighted by their ride.

Simon is expected to help in fulfiling Ola’s mission to build the future of mobility in Australia.

With over 16 years of experience writing code and leading teams, Ranjan has built products and custom software for ERPs, eCommerce companies, enterprises, travel companies and more.

Stay tuned for next edition of Movers and Shakers of The Week!