Over 100 employees have gathered outside the Bengaluru office of MFine demanding roll out of their full salary for the month of May and early release of their full & final payment. The startup on Friday afternoon had laid off around 75% or around 600 employees, as it had run out of funds to pay salaries.

The layoff had come out as a shock to the employees who were expecting an appraisal and had no idea that the startup had run out of funds.

MFine had initially said that it would be paying 20 days’ salary in May and the remaining salary based on the applicable notice period, would be credited in the next 60 days.

Aggrieved employees now demand that MFine should roll out 30 days salaries and the notice period payment should be credited in the next 30 or 45 days.

“Our paycycle is from the 20th to the 20th. We have worked till 20th,” said an employee standing outside the office premise. The employee further said that the startup has not paid their overtime payment, incentives, or holiday comp-off that they were entitled to.

Besides the 30 days’ salaries, employees are also demanding the payments of their incentives for the month, encashment of earned leaves and pending vouchers. After protesting outside the office for hours, today, two employees were allowed to enter the office premise for discussion.

An employee told Inc42 that later in the day MFine agreed to pay the employees 30 days of salary, along with some bonuses. 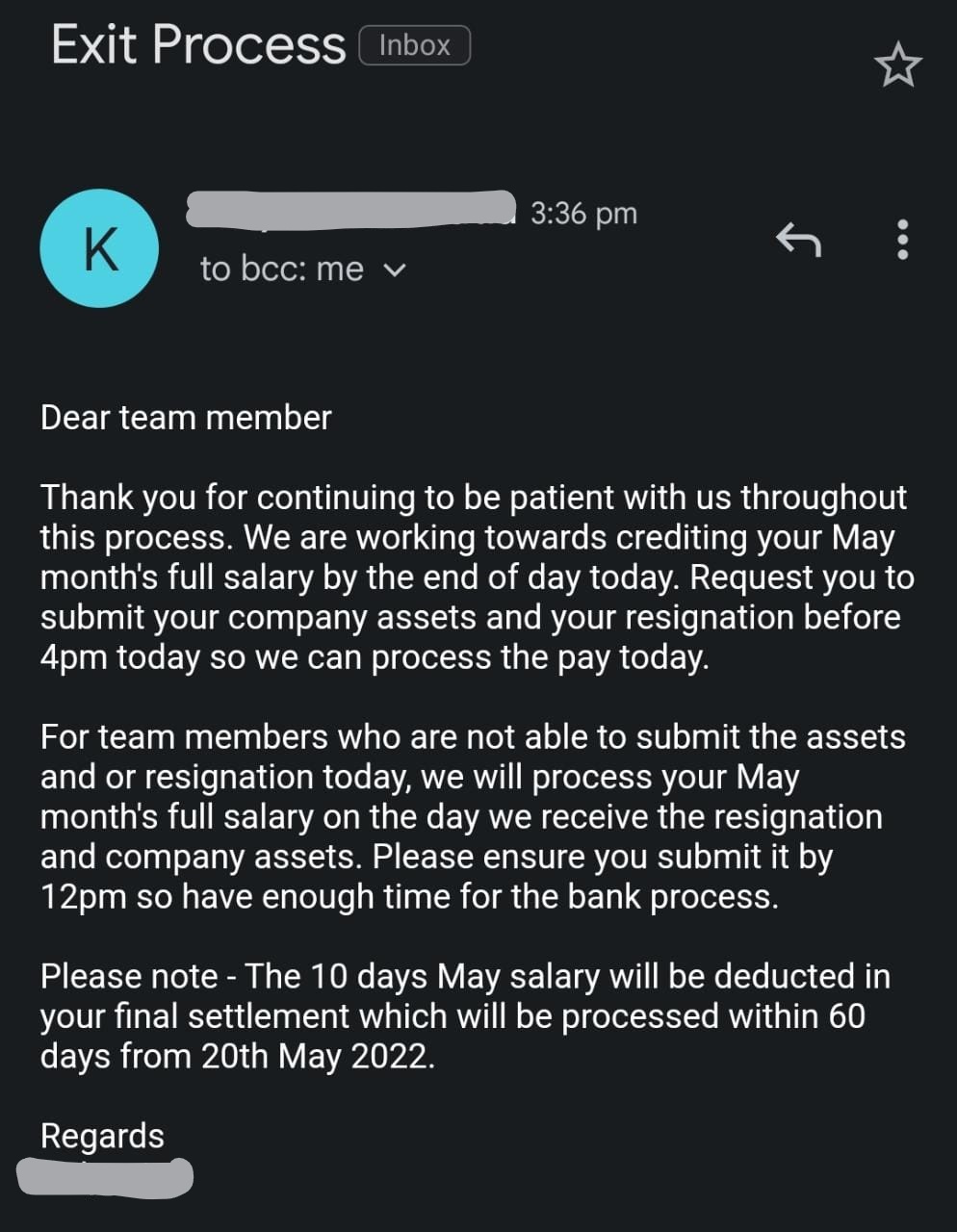 However, employees are least confident in MFine management and said they would believe in the statement only after the salaries are credited.

Employees across senior and junior levels from teams, including quality, sales, training, support and medicines are a part of this mass layoff. However, as per many employees, some of the top managers in the startup’s core team, with the highest pay scale, have been retained. To that end, no one in the top management has taken a pay cut.

Inc42 was barred from entering the MFine office and no one from the management clarified the claims and the status of the employees’ demands.

As per the employees, MFine currently has three office premises in Bengaluru, but only one is now operational.

“After 60 days, if we don’t get paid, whom will we approach? Already two offices are shut, this office is too likely to shut soon,” an employee added.

Several employees said that they were fired without prior notice and threatened with legal actions if they did not submit their resignation letters.

Moreover, within a few minutes of informing the employees about layoffs, their access to the internal documents was blocked. Right now, the laid-off employees do not have their payslips while they are in dire need of new jobs.

On enquiring if the employees could sense such a situation was set to occur, many employees said that there was a worry since the business was not doing well, but the core management team was always assuring.

“Since the business was completely down, I asked my manager two months back if there was a need to worry about the jobs. To that, my manager stated that the company was on a good track, so, your jobs are absolutely safe,” said an employee in the operations team, requesting anonymity.

A month back, he was promoted to a senior position in his team, with a pay hike. Today, he stood at the road demanding the legitimate share of his payments.

Another employee, who is a part of the inside sales team, told Inc42 that MFine had been firing employees in small batches since October last year, citing poor performance.

“The intentions behind the prior fires are now clear, as those employees facing criticism for poor performance was hardly acceptable,” he added.

Being present at the protest site, Inc42 also noticed the apathy on the startup’s behalf where the facilities team, guarding the main entry gate, were not allowing several women employees, including a pregnant woman, to use the office restroom. After requests by a few fellow colleagues, the pregnant lady was later allowed to enter the office premises.

The employees are currently scared and sceptical to be named in the media. They are of the opinion that if a company can mass fire its employees ruthlessly, they can as well put negative feedback about these employees during background verifications by their next employers.

From being worried about paying their next EMIs to standing hopeless in the face of starting a new family, different employees talked about the varied challenges they are expecting to face on losing their jobs.

A third employee, who is a part of MFine’s workforce management team, said that he was forced by the startup to relocate to Bengaluru from another city just a month back. He is now worried about the money that has gone into paying a large deposit for his stay in Bengaluru, but he is hardly left with any other option than to go back to his hometown.

According to several employees, MFine has come up with some solutions to help the laid-off employees with new jobs, but a majority of them have not opted for that as they have lost trust in the company.

MFine had sent an email on Thursday (May 19) asking employees to log in from home on Friday, citing the orange alert issued by India Meteorological Department due to heavy rainfall in Bengaluru. The laid-off employees claimed it was a planned activity.

An employee even claimed that the day prior to issuing the email regarding the orange alert, another MFine office was completely vacated while its Delhi office was closed on Friday (May 20) citing the detection of a Covid-19 case.

Hence, employees are of the view that the plan was brewing at the upper management level for some time while the lay-offs were announced at the end moment.

MFine was launched in 2017 and has raised close to $97 Mn from investors such as Moore Strategic Ventures, BEENEXT, Prime Venture Partners, Stellaris Venture Partners amongst others.

The healthtech startup offers telemedicine services providing primary, secondary and chronic care services. As of March this year, it was clocking 300,000 monthly transactions.