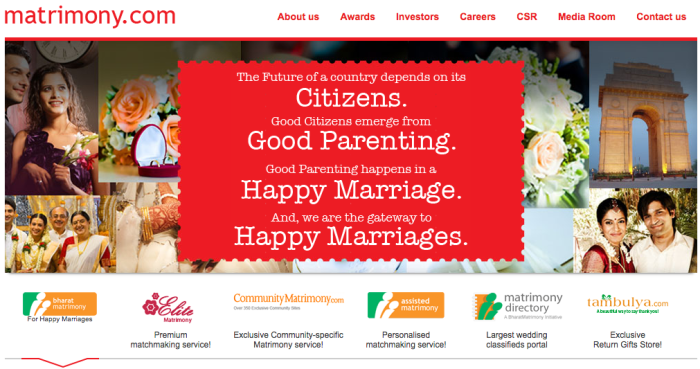 The Chennai-based online matrimonial portal, Matrimony.com is all set to go for initial public offering (IPO) and is eyeing a valuation of $450-500 Mn. The company has signed on Citigroup Global Markets, Deutsche Bank and Kotak Mahindra Capital as investment bankers for issue. This is expected to be the first by an Indian internet company after Justdial’s successful listing in June 2013.

A person familiar with the plans said, “The three banks have just been formally given the mandate to start the IPO process— $450-500 Mn  valuation seems fair at this stage.”

The company is expected to file the DRHP (draft red herring prospectus) in the next two months, said another source. However, Murugavel Janakiraman, founder and CEO of Matrimony.com declined to comment on the plans and said, “We do not comment on any speculation.”

Founded in 1997 by Murugavel Janakiraman, Bharatmatrimony.com was initially launched with the name of Consim Info and then renamed as Matrimony.com. The company is backed by Silicon Valley venture capital investors such as Canaan Partners, Mayfield and Bessemer Venture Partners.

Matrimony competes with other portals such as Shaadi, Times Group’s SimplyMarry and Info Edge-owned Jeevansaathi and enjoys a market share of about 60%. The company has 130 offices in India, with offices in Dubai, Sri Lanka, United States and Malaysia to cater to its customers beyond India.

Last year, ecommerce and digital companies have attracted more than $4 Bn in funding in 2014, only a few such as JustDial, Info Edge and MakeMytrip are listed. Recently, ecommerce giant Flipkart has also announced its plans to raise $5 Bn through IPO which could value the company at over $30 Bn.