All families under the purview of the National Food Security Act, 2013, will be eligible for this scheme

Every eligible household will be provided with INR 1,000 in two phases to buy a smartphone and avail Internet facilities from brands and service providers of choice 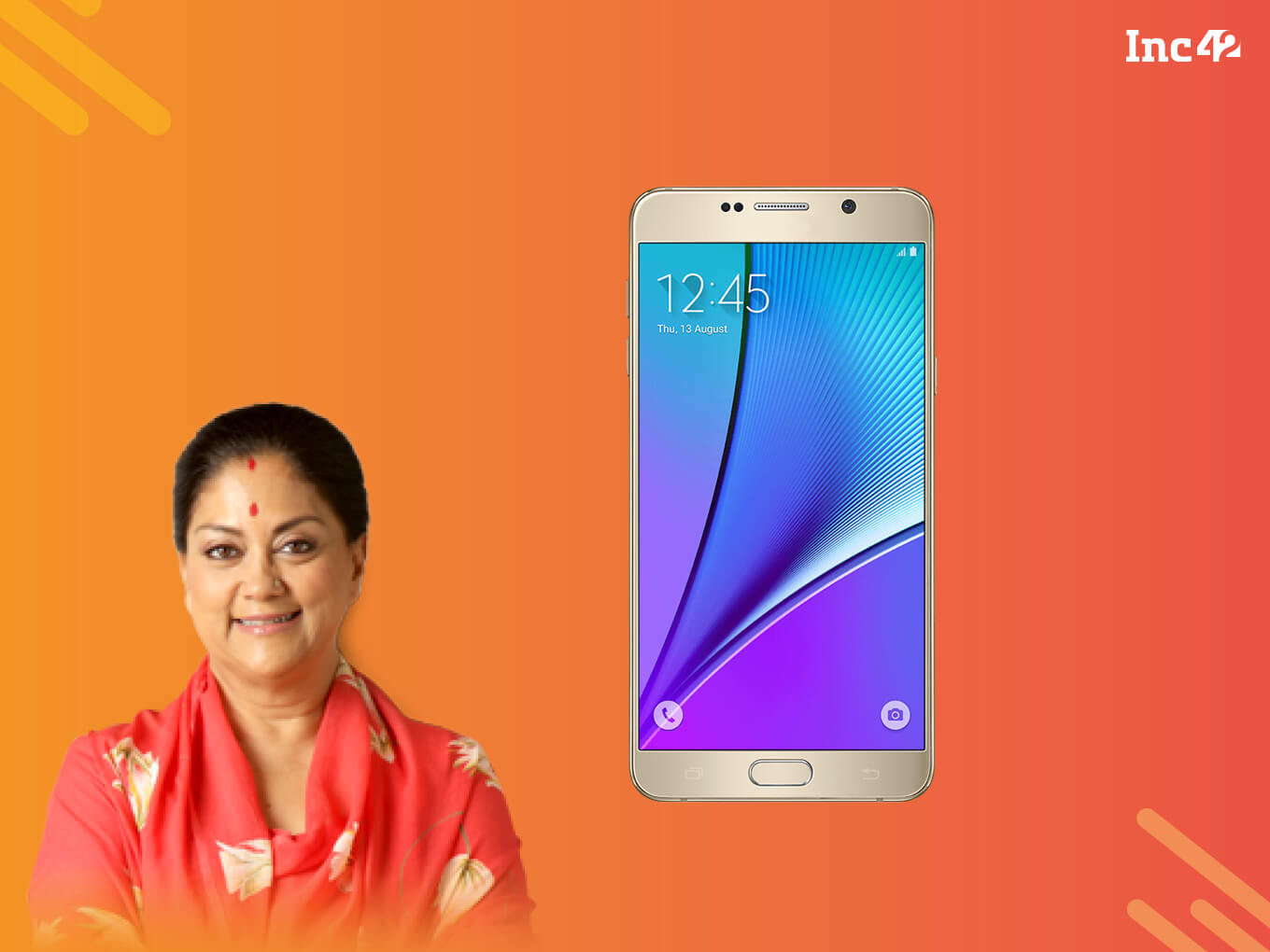 “If maybe not today, then, in a short while, people will realize that digital is tomorrow, digital is the future, and digital is what is going to make us free of all the encumbrances that we have suffered so far.” — Vasundhara Raje, Chief Minister, Rajasthan

In 2008, even before the implementation of the Aadhaar programme had started, Raje launched the first direct benefit transfer scheme the Bhamashah in Rajasthan. Since then, the CM and her team have been working towards one mission: “Building the Rajasthan of tomorrow — the Digisthan where the digital dreams come to life.”

Nominated as the Digital CM of the year and being credited as the visionary behind Rajasthan’s digital transformation, Raje has now taken a giant step in a bid to make digital synonymous with basic necessities such as food, water, and shelter in her state. The CM has launched the mega initiative Bhamashah Digital Parivaar Yojana, under which the government is offering free smartphones and Internet connections to families enrolled under its flagship direct benefit transfer scheme — Bhamashah.

That’s not all, they can choose the smartphone and the net connection from a brand and data provider of their choice, respectively. The idea is to not just provide a smartphone but also an Internet connection, thereby making 100% of the state’s residents digitally empowered at one go.

By combining the two schemes — Bhamashah and the Bhamashah Digital Parivaar Yojana — the state government has paved its way to reach sections of the society that are still untouched by the digital wave and that too via a digital route, thus serving two aims in one go!

As part of the Bhamashah Digital Parivaar Yojana, an amount of INR 1,000 will be disbursed to each beneficiary family in two phases. In the first phase of implementation, the Rajasthan state government will deposit INR 500 directly into the Bhamashah account of the family to purchase the smartphone.

The second installment of INR 500 can then be received by the beneficiary family after downloading any service app from the state government’s platform.

How Phase I & II Of Bhamashah Digital Parivar Yojana Work

CM Raje has proven through her efforts that if digital inclusion is made a part and parcel of the government’s prime agenda, it can transform the lives of Indians to a great extent. Recently, Inc42 team — during its 10-day visit to Rajasthan — was witness to this wave of digital transformation sweeping through the state.

The lives of women, youth, farmers, and others in the state have changed for the better, and now sectors such as small businesses, healthcare, education, and agriculture have been impacted positively by the eGovernance initiatives taken by state’s government.

It must be noted that as of October 31, 2016, the overall tele-density of the state was observed to be 86.11 and the number of mobile telephone subscribers in Rajasthan was around 5.9 Cr (59 Mn) as on February 29, 2016. The number has been growing by leaps and bounds thanks to the state government’s efforts to boost digitalisation in every aspect and sector.

Also, Raje is the only CM operating a mobile app in her name — the ‘Vasundhara Raje Mobile App’ — since 2016, thereby bringing the governance closer to the people. There is no doubt that the Rajasthan government clearly understands that a smartphone is the easiest way to ensure that all the state benefits and services reach the right people at right time.

The government is also working to spread awareness about how the digital wave can improve the lives of financially backward communities in the state and the Bhamashah Digital Parivaar Yojna is a mega initiative in this regard.

The Rajasthan government’s initiative to arm every family in the state with a free smartphone and Internet connection is the first of its kind in the country.

More often than not, in such large-scale schemes, monetary grants are offered to people, leaving loopholes for middlemen to make money. Or people are forced to opt for a particular brand. However, like other schemes of the Rajasthan government, this initiative too has been well thought of. By offering the freedom of choice to the beneficiaries, the government has taken a clear stand that it’s not favouring any particular brand or enforcing its decision on people.

Next, the phase-wise approach — ensures that the scheme doesn’t end up being misutilised. With India ranked 81 in the global corruption index, one can never be sure whether the given money is utilised for its exact purpose or not. Thus, ensuring conditional fulfillment of the scheme at intervals is a smart move by the government.

The government is ensuring the scheme money is used for its real purpose by disbursing the second installment only after the beneficiary has subscribed to a proper Internet connection and has downloaded a government app.

In the long term, this data will also help the government in ascertaining the kind of policies and efforts required to further boost further digitalisation of the state.

Rajasthan, a state with a population of close to 69 Mn (6.89 cr), is one of the harbingers of digital change in India. It is taking incredible strides towards digital transformation across sectors and cross-sections of society, which no other state has been able to do at such a mass level.

In the last four-and-a-half years, the state government has taken many initiatives to digitally connect people and to make digital technology an integral part of their lives.

Today, the overall Bhamashah programme supports more than 50 government schemes while egovernance has been ensuring their digital penetration in the state. And Inc42 was witness to the stories of people whose lives have been changed by digital during our Digital Rajasthan Yatra II and I — be it a woman who saved her husband’s life via Bhamashah or a farmer who is now getting a fair price because of elimination of contractors.

We met children who love going to school because of smart classes and saw how the youth of Rajasthan is using new technologies to seek gainful employment. With a plethora of its scheme — the state government is making smartphones, Internet and other new-age technologies accessible to people of every age and class through its various schemes and initiatives.

The Bhamashah Digital Parivaar Yojana is the icing on the cake of the Rajasthan government’s plethora of digital initiatives. Easy access to smartphone and Internet connectivity will help increase the digital literacy ratio in the state and also boost awareness on various digital-focussed schemes offered by the government in different segments.

Arming people with smartphones and an Internet connection will enable them to better access all other popular e-services such as eNAM, Raj Sampark, RajNet, eSakhi, Bhamashah Wallet, and the government’s vernacular email service in both English and Hindi, among others.

CM Raje: Sowing The Seeds Of A New Rajasthan For Gen C

In the last 20 years, the world has moved ahead from Gen X, Y, and Z to Gen C — the most connected generation of the century — the Millennials. By spreading the digital revolution deep into Rajasthan, the state government is paving the way for a completely digital state characterised by 24×7 connectivity and to access services at the click of a button. Just what Gen C needs and wants.

And this revolution is being led by a CM who is said to be one of the leading promoters of digitalisation in Rajasthan. While entire India is talking today of digitalisation, Rajasthan has been a frontrunner in the race. With India dreaming of attaining full digitalisation by 2020, it’s time other states also start working to spread a similar wave of digital inclusion.

For Rajasthan, which is already well on its way to becoming Digisthan, the Bhamashah Digital Family Scheme is a giant step ahead in its mission and is sure to put smiles on the faces of millions of more people in the state.

As Raje says, “There is more to be done and more smiles to be brought on people’s faces. That is the future we are working towards.”