Why Lookup’s Snazzy New Office Is Worth Looking Up To!

Why Lookup’s Snazzy New Office Is Worth Looking Up To! 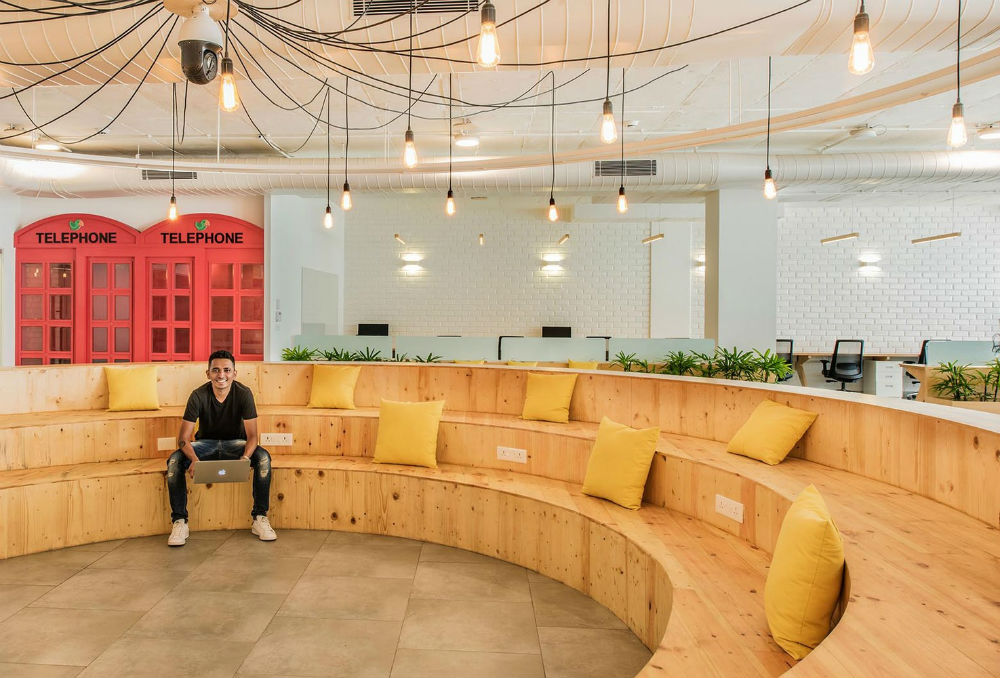 Nothing ventured, nothing gained

Reads a quotation on one of the solid brick walls of the new 5000 sft snazzy office of Bangalore-based messaging app Lookup. The words in their brevity sum up the ambitions of Lookup, whose CEO Deepak Ravindran has stated in clear words at the time of their Series A fundraise, “We want Lookup to be the Google equivalent for finding products and services offline.” No wonder with their new office space, they are climbing up the charts in being as dynamic and cool as their idol Google.

Lookup’s new office has been designed by Bhumiputra Architecture, headed by principal architect Alok Shetty. The office has been designed by Shwetha Devidas and Aditi Mukherjee from the Bhumiputra team while the interiors have been done by Sendil Kumaran of Circumpunct Interiors. The design of the 5,000 square feet office completed in about 4 months is based on one core principle- the requirement of flexible, open work spaces for a young, dynamic team. And it is this vision which is reflected in the minimal yet confident and most importantly, an efficient new office. 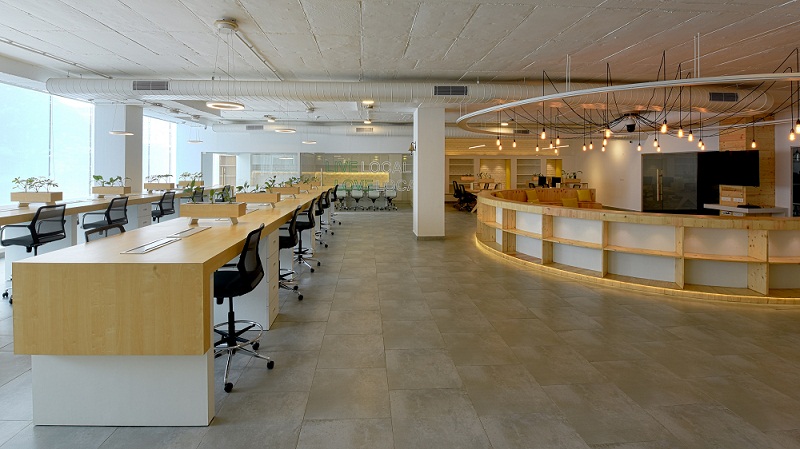 The most noticeable thing about the office is that it has only two meeting rooms-a CEO meeting room and a conference room. Rest, the entire workplace is designed to follow a philosophy of flat hierarchy. Says Deepak,

We hold a very flat hierarchy where everyone can reach out to anyone. It is this idea which we wanted to be reflected in the office space-let’s talk to each other. So barring the two meeting rooms, there are no other rooms in the office which has been fashioned from a bare, shell space.

And this idea is amply reflected in the flat open spaces! 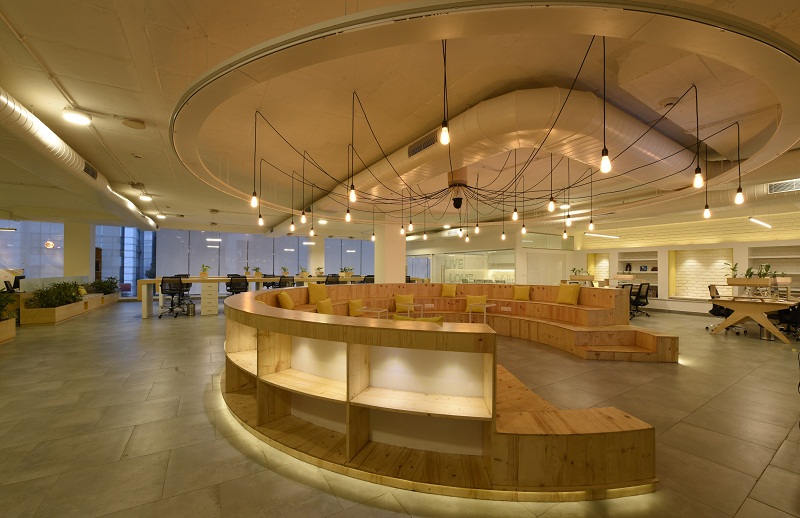 The work space consists of workstations ranging from standing desks in order to encourage a more active and dynamic culture, to tables you can write on, and cosy cubbyholes. Says Deepak about the standing workstations, “ I feel that when one stands and works, one is more focussed. This was the idea behind incorporating them.” 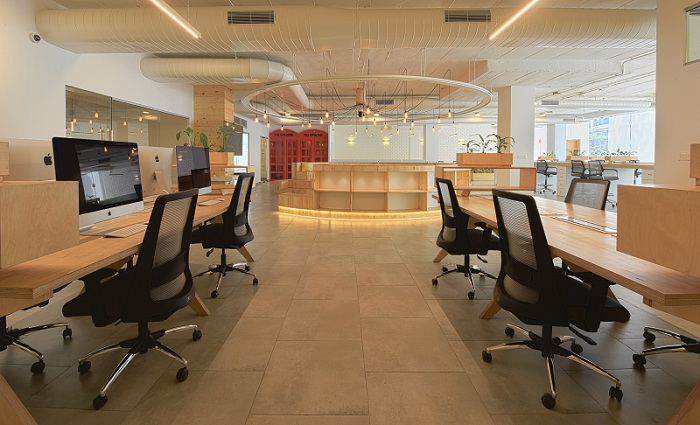 Lookup’s green trademark colour has not only been incorporated in their logo painted on glass panels but also in the use of indigenous plant species strewn around the office. 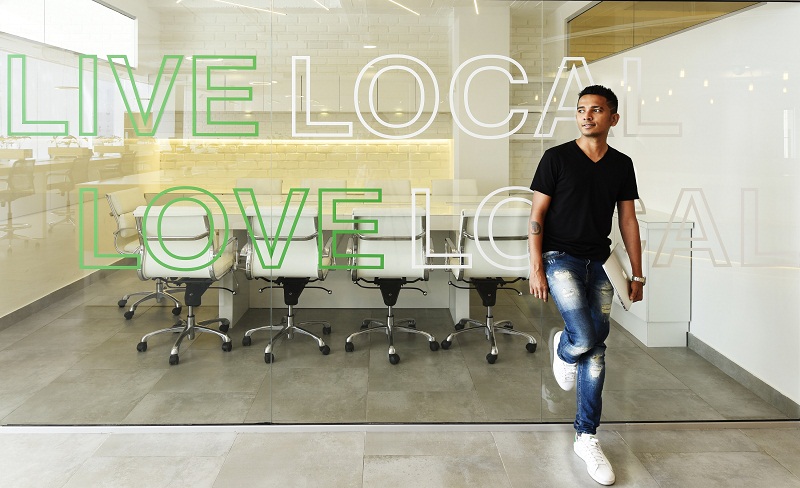 The plants not only add colour and life to the office but also add serve the purpose of differentiating spaces-and in such a soothing way! 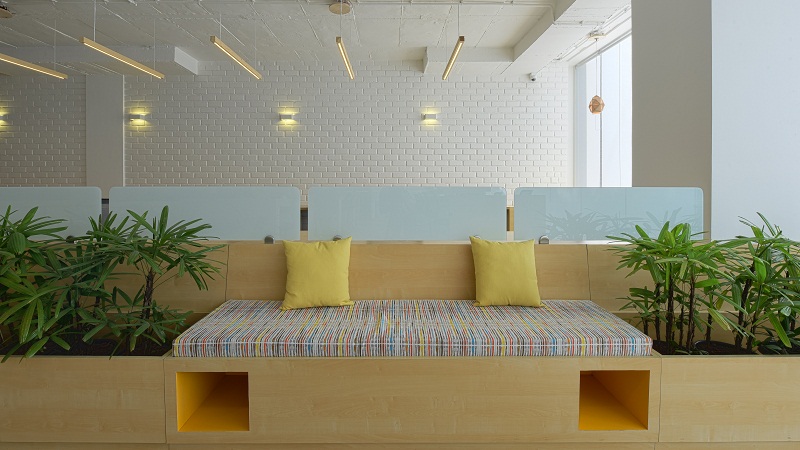 To add to the coolness factor, the office space also has a cluster of bright red, old-school telephone booths that are actually used as ideal spots for Skype calls! 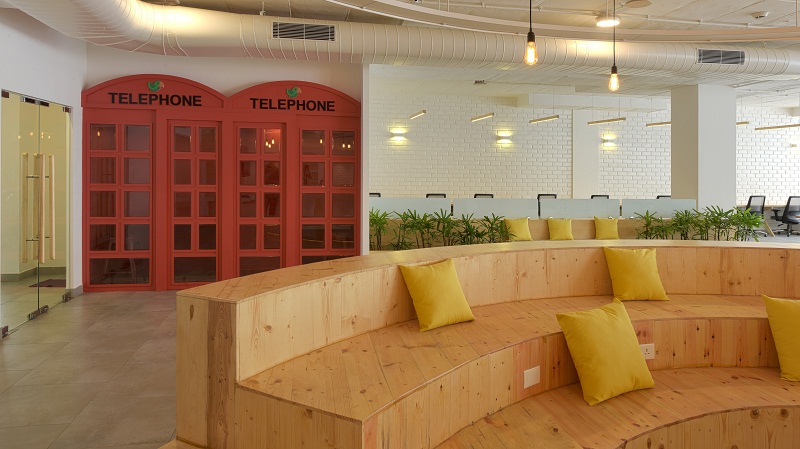 At the very centre of the office is a semi-circular amphitheatre fondly nicknamed “The Pitch” which is used as a brainstorming arena by day and a recreational hub as night falls! 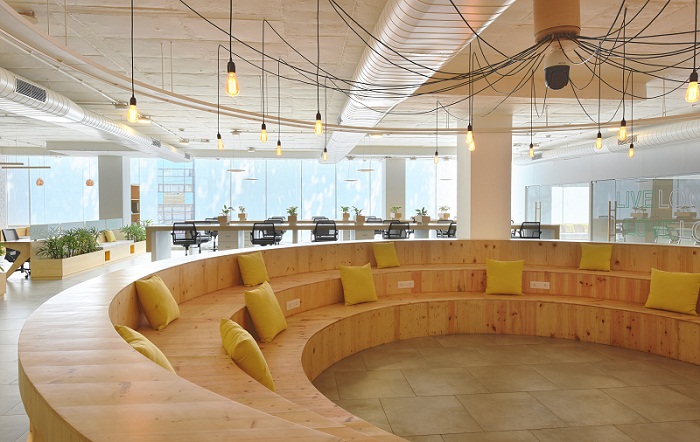 Staying true to its core of enabling local commerce, Lookup made sure that mostly all the materials required for the construction of the new office were sourced from local vendors.

Thus, the whole construction process itself was a self-sufficient one. Indeed with the new office Lookup has truly lived up to its motto of “Live Local, Love Local”! And as far as the first looks go, there is little doubt that the new office will be loved locally as well as globally! 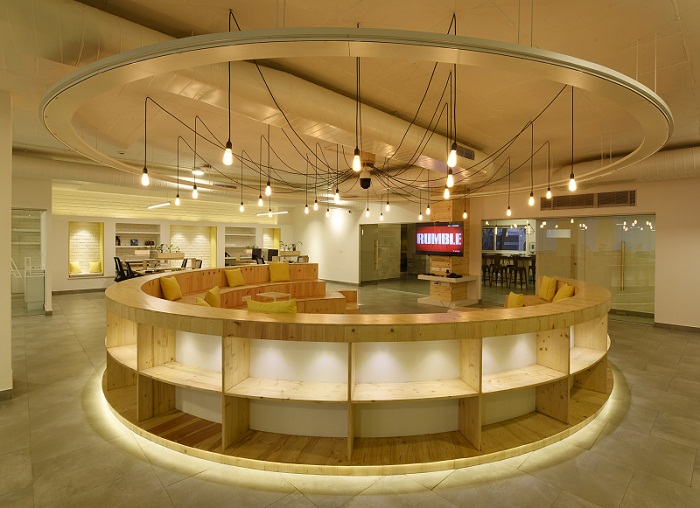 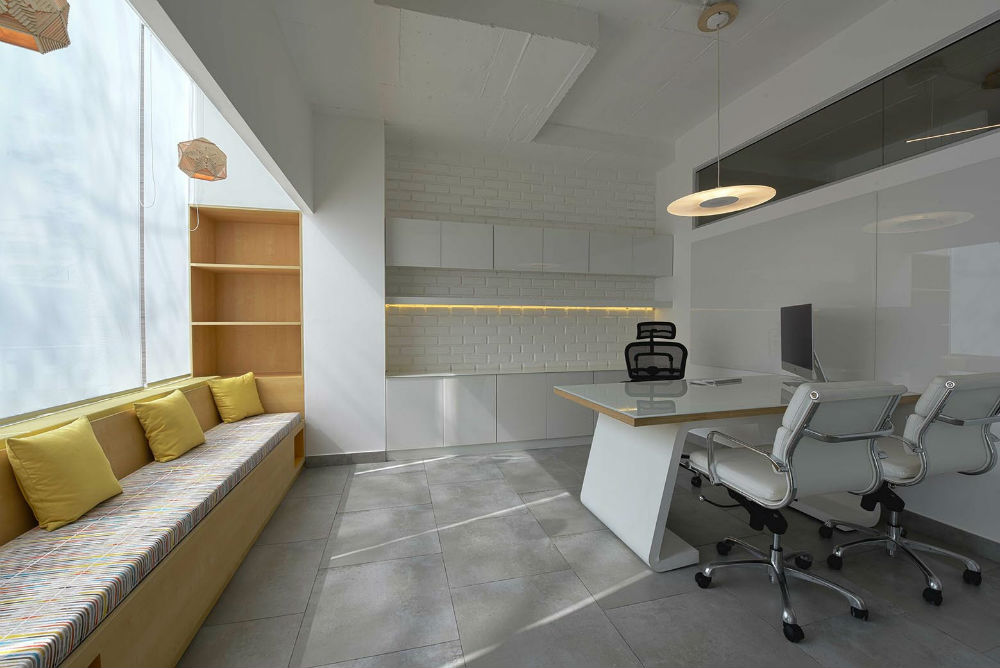 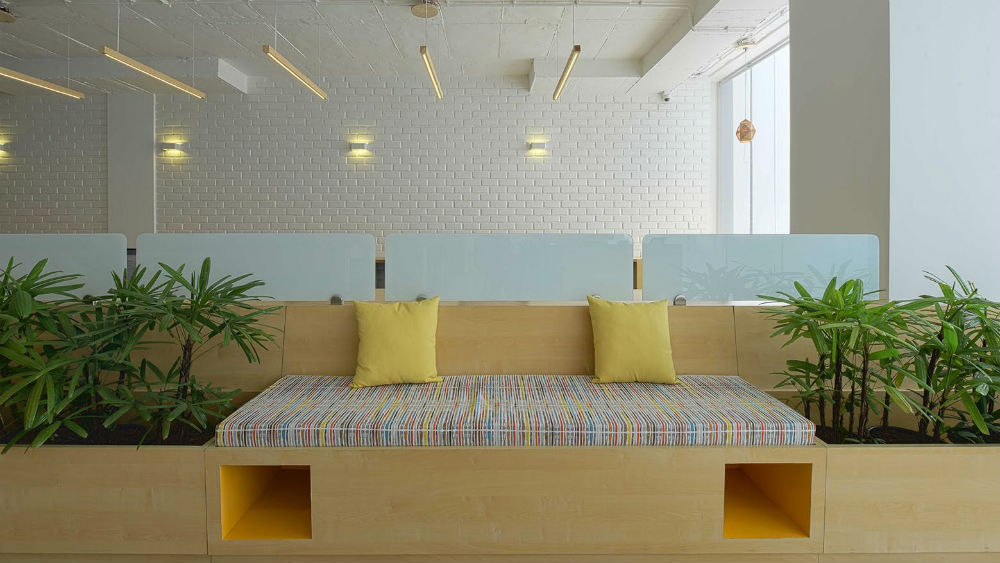 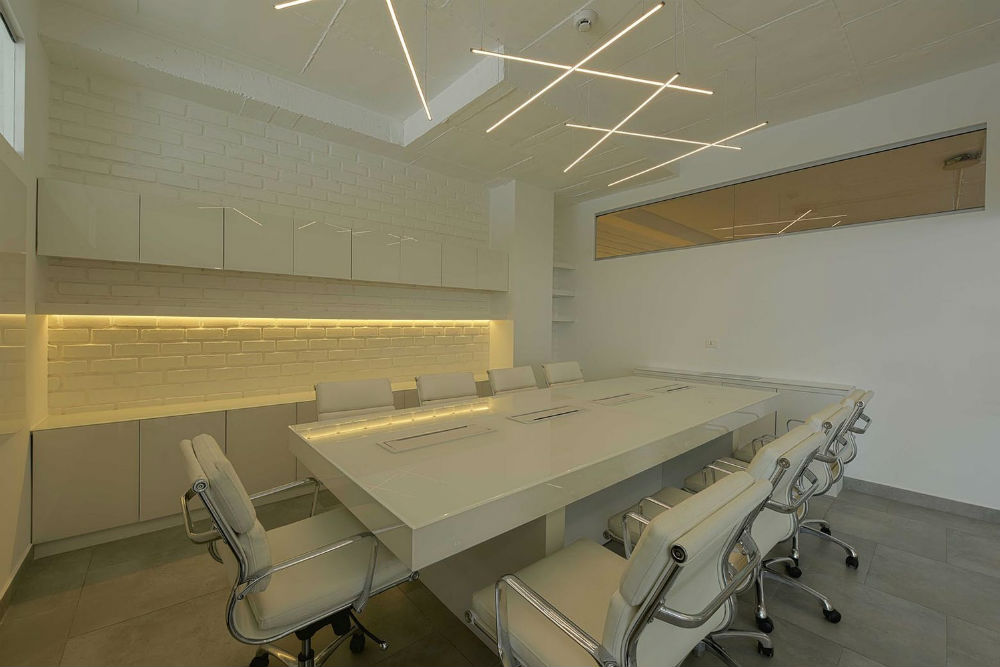 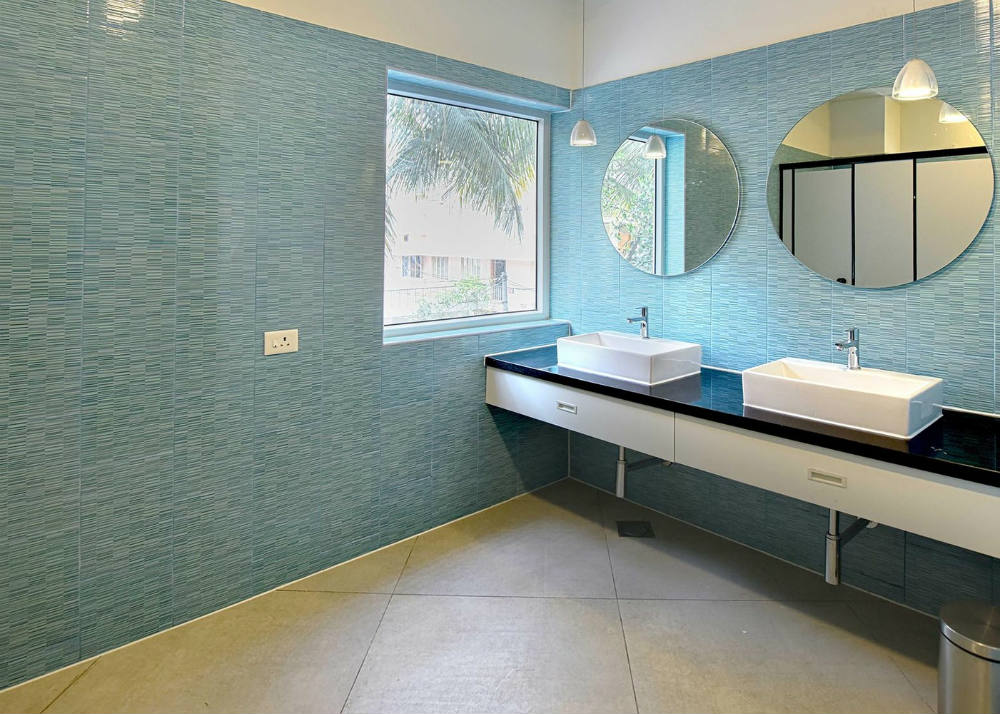 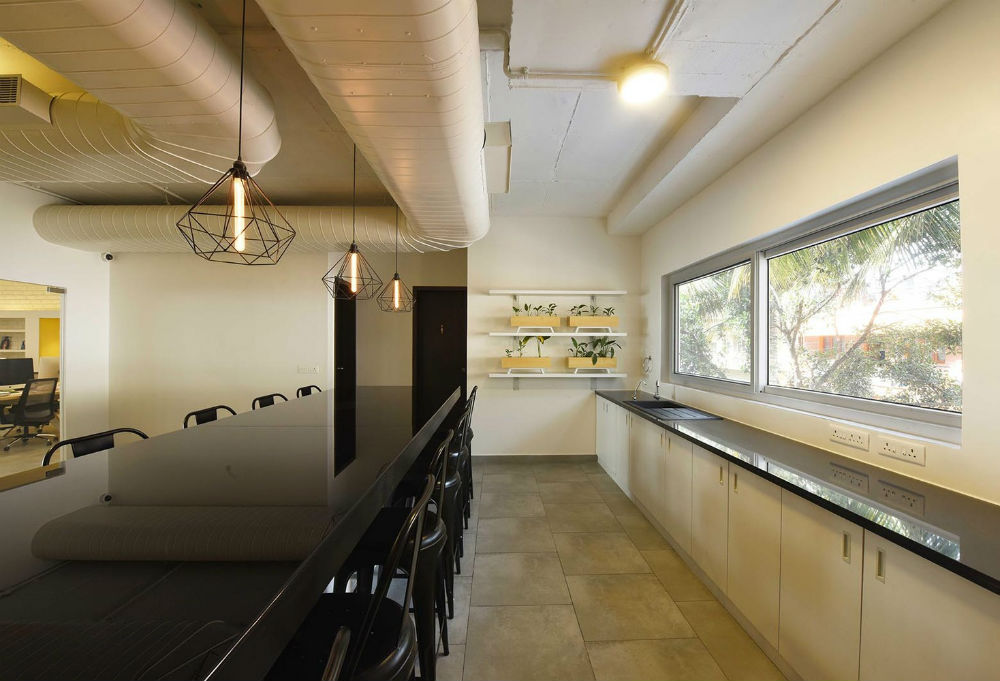 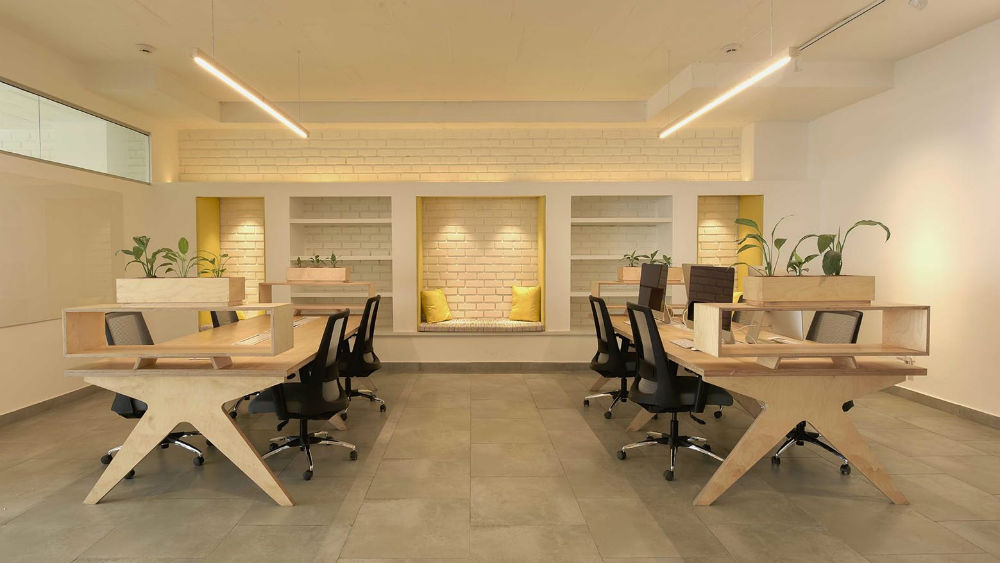