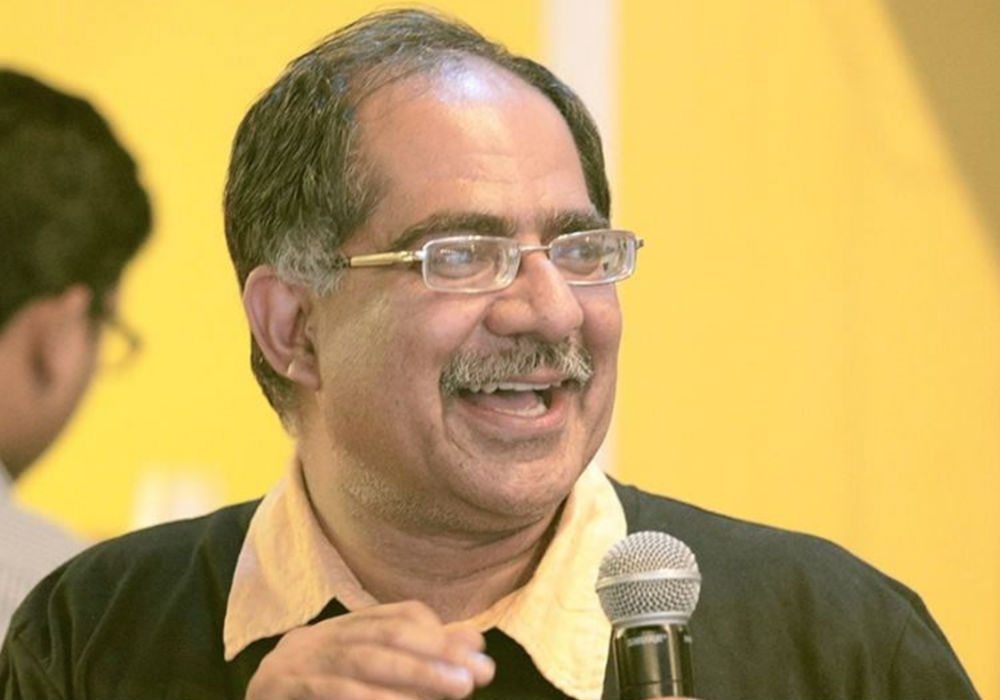 Indian software products think tank iSPIRT has disclosed that ‘Sudham’ – the alleged programme sanctioned by the organisation to troll anti-Aadhaar activists has been dissolved.

Also, in the aftermath of this controversy, key iSPIRT members are said to be distancing themselves from the organisation.

The decision to shut down Sudham was revealed in an official statement by Sharad Sharma titled: “The End Doesn’t Justify The Means: A Public Statement.” In the post, Sharad stated that iSPIRT had created an iSPIRT Guidelines and Compliance Committee (IGCC) to investigate the controversy. As a result, Sudham has been dissolved and Sharad will not be responsible for iSPIRT’s external communications for the next four months, as a consequence of the “transgression.”

He stated, “And, on that count, I as one of the builders have stumbled. I condoned uncivil behaviour by some anonymous handles over a period of ten days. I have owned up to this transgression. It was investigated internally by the iSPIRT Governing Council: Sudham as a team stands dissolved and I will no longer be communicating on behalf of iSPIRT externally for 4 months.”

Talking about the events that took place Sharad added, “Having danced with such tactics myself for ten days in May, I can say with certainty that it is conduct unbecoming of our prior actions and accomplishments. Put simply, I have learnt my lesson. One that should have been painfully clear to begin with. Such behaviour — uncivil comments made while hiding behind anonymity — is loathsome and abhorrent. And I will never engage in or condone such methods ever again.”

Sharad’s statement comes a week after he publicly apologised for iSPIRT anonymously trolling those voicing concerns over privacy and security standards in Aadhaar. The trolling programme was brought to light by Kiran Jonnalagadda, Aadhaar’s most vocal critic and co-founder of Internet Freedom Foundation (IFF), an advocacy group. Kiran revealed in a series of tweets that @Confident_India, one of the anonymous accounts arguing in favour of Aadhaar and attacking its critics on Twitter, was being operated by none other than Sharad Sharma. He also revealed in detail about the programme in a series of Medium posts that Sharma and other iSPIRT members were behind the anonymous trolls.

In response to Kiran’s post and criticism from all quarters, iSPIRT’s Governing Council put together a Guidelines and Compliance Committee, which conducted an investigation that concluded on 28 May, 2017. Sharad’s post is a reflection on the same, though the IGCC itself has not issued a public statement.

Kiran pointed this out in yet another Medium post where he states that, “Following my posts and much media coverage, iSPIRT’s Governing Council put together a Guidelines and Compliance Committee (IGCC), which conducted an investigation that concluded on 28 May, 2017. We do not have a public statement from IGCC, but instead—curiously enough—have a public statement from Sharad Sharma himself, summarising the decisions of the committee that investigated him.”

In the post, Kiran stated, “As a primary victim of Sharad’s trolling, and as someone who deposed before the IGCC, I have yet to hear back from them officially.”

He further added that, “I’m pained to point out that Sharad continues to not admit to being the person behind at least two troll accounts, instead merely admitting to ‘condoning’ the behaviour of unnamed persons.” 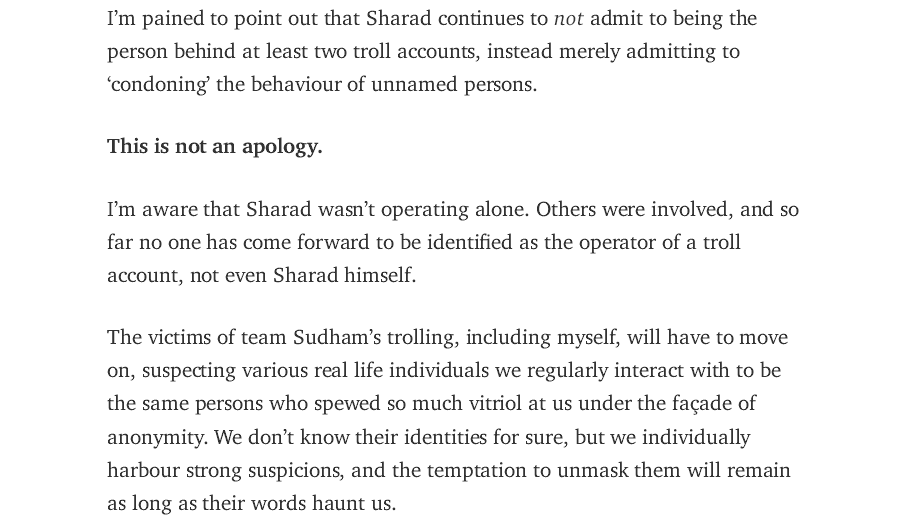 Kiran clearly expressed his disappointment with the statement when he said that, “I’m aware that Sharad wasn’t operating alone. Others were involved and, so far, no one has come forward to be identified as the operator of a troll account, not even Sharad himself.”

Meanwhile, the trolling programme, which has cast a negative light on iSPIRT, that started as an organisation to promote software products, seems to have taken a toll on the organisation itself. As per a TOI report, a few higher ups, including InMobi co-founder Naveen Tewari and FusionCharts founder Pallav Nadhani are distancing themselves from the organisation, as of now.

In an emailed response to Inc42, Pallav stated, “I will be working with iSPIRT from the sidelines, not as a part of it, at least for some time. The cause is larger than any of us and important for the country. As of now, I have expressed my intent to move on, but I do hope that iSPIRT will emerge way stronger and continue contributing to Indian ecosystem. There are over 200 passionate volunteers behind the cause. “

For an organisation that holds an important place in the Indian startup ecosystem as far as promoting software is concerned, in the aftermath of this controversy, it seems like the right time for it to refocus on its primary objective and owning up to its gaffes.

Because, as Sharad aptly writes, “There will be a time when we must choose between what is easy and what is right. It is our choices that show what we truly are, far more than our abilities.” – Albus Dumbledore.”

The Aadhaar critics trolling programme may not have been the finest hour of the forward-thinking organisation, but it has become an important part of the larger social conversation. Here is hoping that iSPIRT chooses the right kinds of path, going forward.