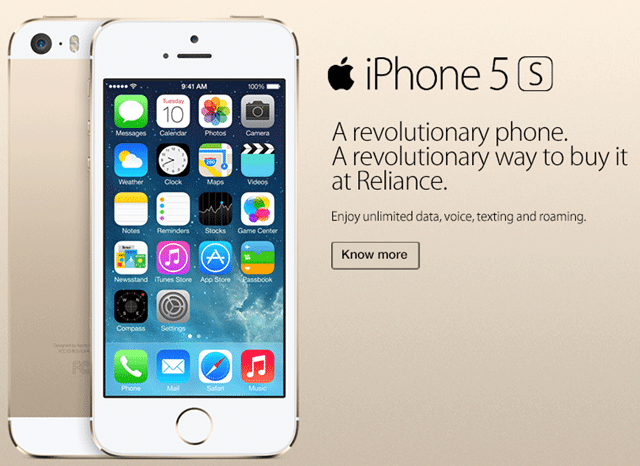 Everyone wants to own an Apple product, but not everyone can manage the big price tag. So, even though the iPhone 5s and iPhone 5c smartphones have launched in India this weekend, not many are excited.

RCom created headlines yesterday by announcing it will be giving the new iPhone 5S and iPhone 5C for free with unlimited national usage of calls, SMS and data for Rs 2,999 or Rs 2,599 per month for two years. The deal sounded too good to be true and we were waiting to check out the fine print. Now that we have read it, let’s see whether it makes any sense to go for it or not.

Right at the outset, let’s make it clear that RCom is not giving away the new iPhones for free. According to the terms and conditions, RCom is charging users Rs 61,856 for the 16GB iPhone 5S and Rs 10,124 will be charges levied by banks as interest calculated at the rate of 15 percent per annum on a reducing balance over 24 months. In other terms, it is an EMI scheme that has existed earlier as well but the only difference is that RCom is bundling unlimited usage with no FUP. To simplify it for end users, they are paying Rs 18,480 or Rs 770 extra for two years of unlimited service. This offer is only available on Citibank, ICICI and Stanchart credit cards.

Having said that, many users would be misled that they would be paying Rs 2,999 or Rs 2,500 from their credit cards every month. However, the real situation is that the credit card company would block the entire payable amount from the user’s credit card limit and will keep unblocking the monthly plan amount that is paid at the end of every month. For instance, if your credit card has a limit of Rs 100,000, they will block approximately Rs 72,000 under the offer and only Rs 28,000 will be available for use. Then at the end of every month, you will be charged Rs 2,999 in your credit card bill and that amount would be unblocked after you clear the bill.

Of course, RCom is offering users the choice of paying the entire sum in one go. It is offering a “discount” of Rs 6,000 and users can pay Rs 65,980 for the 16GB iPhone 5S and get the phone and two years of unlimited service. In essence, RCom is charging Rs 12,480 or Rs 520 per month for 24 months upfront for unlimited service.

Commenting on the offer, Gurdeep Singh, President & CEO (Wireless), Reliance Communications Limited, said: “We are delighted to be amongst the first to launch the Apple iPhone 5c and iPhone 5s in India and are focused on growing this user segment with our novel iPhone offers, which break all ownership rules and put the customer first. The Apple iPhone has been a dream for users in India and overseas, and it is our endeavour to grow this market and make every Indian’s dream come true with RCom’s compelling and affordable iPhone ownership plan.”

RCom has partnered with select credit card providers to extend the offer with a single swipe of a credit card enabling users to opt in for the contract for 2 years. The Company has also launched special facilities for corporate users of Apple products who would like to migrate to the Reliance network through MNP, with their requests being fast-processed. It’s also setting up a special dedicated helpline for Apple customers for assistance and inquiries.

The iPhone 5c and 5s series, which was launched by Apple in September, has proved to be a massive hit in international markets, with 9 million iPhone 5s and 5c phones being sold in just three days. Subsequently the 5s, which is the more expensive model, turned out to be a better seller than the cheaper and more colourful iPhone 5c. The 1 November launch was known well ahead of time, and this marked the first time that Apple had actually announced a launch date for India. In fact, all indications are that the tech giant is starting to look at the Indian market a little more seriously than it has in the past.

The bottomline: There is no doubt that the truly unlimited service including nation-wide calls, SMS and data usage for Rs 770 or Rs 520 per month is a great deal. However, we do not see any reason why one should spread the payment over two years and pay Rs 250 extra every month and at the same time have a lower available credit limit.

Secondly, committing oneself for two-years at this moment is going to be a big commitment. One needs to be sure about RCom’s network. Thirdly and most importantly, next-generation 4G LTE networks are around the corner and will certainly start rolling out in the next couple of quarters. By this time next year, we expect most of the major cities to have a functioning 4G LTE network by Reliance Jio Infocomm. RIL is expected to launch its 4G LTE network at aggressive prices with much higher data speeds. However, those who go for this plan will have to live out this plan before migrating to LTE.

With no proper credit checks and other practices in place in India, it is still not possible for carriers to offer subsidized phones with a multi-year contract period. Yes, RCom has subsidized its tariff plans and is offering a great unlimited plan but the options of either paying the entire amount upfront or paying Rs 250 per month extra over 24 months and having the entire amount blocked on a credit card are huge deterrents.

As far as India’s smartphone market is concerned, while it is one of the world’s fastest growing ones, it is also extremely price sensitive. The testimony to this is that low-budget smartphones makers Micromax, Karbonn are number two and three (Behind Samsung) on the list of top smartphone vendors in India. So, RCom’s offer is more than likely to entice consumers to buy that otherwise ‘premium’ product.