IRCTC Ecommerce On A Temporary Halt, Looking For A New Partner; Not Shutting Down

IRCTC Ecommerce On A Temporary Halt, Looking For A New Partner; Not Shutting Down 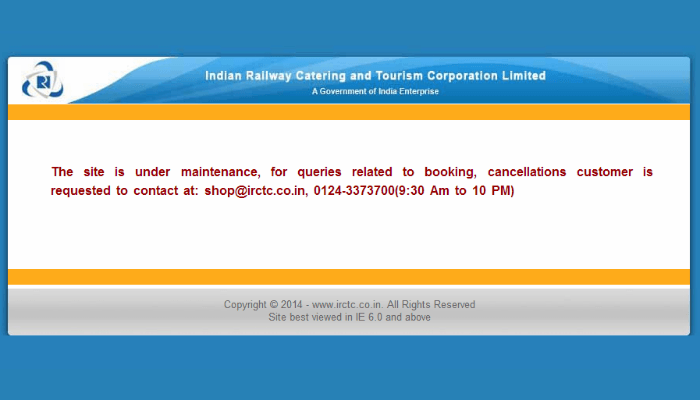 The media reports and the current homepage display of the IRCTC Ecommerce arm  have created doubts that the year old venture has seized its operations . But according to new reports, IRCTC has denied any such move calling it a routine exercise.

Yesterday, NBW had reported that the website is not functional from a past few days and even the contact channels are non – responsive.

Last year IRCTC had announced its plans to enter ecommerce by using a white label model and had partnered with Yebhi for the same. It is worth noting that, IRCTC has not renewed its contract with Yebhi, this was well accepted as in a recent  interview IRCTC Joint GM Sunil Kumar had mentioned that their agreement with Yebhi will end this year.

“The partnership was based on the assumption that Yebhi will benefit from the huge traffic on the IRCTC site, especially from small towns. Though we were successful in getting some traffic, we didn’t get the expected conversion rates,” said Manmohan Agarwal, CEO, Yebhi.

According to a source, space meant for promoting Yebhi’s products was given to other advertisers, a key reason for trouble between the two parties.

IRCTC will now be floating a tender in a couple of months for another player to come in.

It is also expected that IRCTC may also consider a marketplace model where ecommerce players could be listed on the IRCTC portal, rather than following a white label model this time.

At this point Yebhi too is struggling to manage its operations since February after dropping it plans to raise funds and is even backfired by its employees for non-payment of salaries.

Flipkart Raises $1 Bn In Fresh Round Of Funding, Now Valued At $5 Bn

However, its unclear for now what will be the next plan of action for IRCTC ,if not shut down? Whether it will follow a White Label Model or even a Marketplace but whatever be the case the question arises is will it be able to stand up strong against the other ecommerce giants? Will its user base help it in becoming the front-runner?

We have reached out to our sources at IRCTC and will update the story as required. Stay Tuned!