Info Edge got an exceptional gain of INR 9,511.6 Cr in FY22, mainly due to selling some of its stake in Zomato IPO and unrealised mark to market gain

Noida-based online classifieds company Info Edge reported a multifold rise in its net profit for financial year 2021-22 (FY22) to INR 8,922.5 Cr due to gains from listing of food giant Zomato on the stock exchanges.

Info Edge was one of the earliest investors of Zomato and held an 18.6% stake in the startup before it went public. The company received INR 375 Cr for its sale of over 4.9 Cr shares of Zomato through an offer for sale (OFS) during its initial public offering (IPO).

“Effective listing date, Zomato Ltd has ceased to be a joint venture and has been reclassified as financial investment which will be fair valued at each reporting date…Accordingly, unrealised mark to market gain of INR 89411.95 Mn till date of listing of Zomato has been credited to P&L through exceptional item,” Info Edge said. 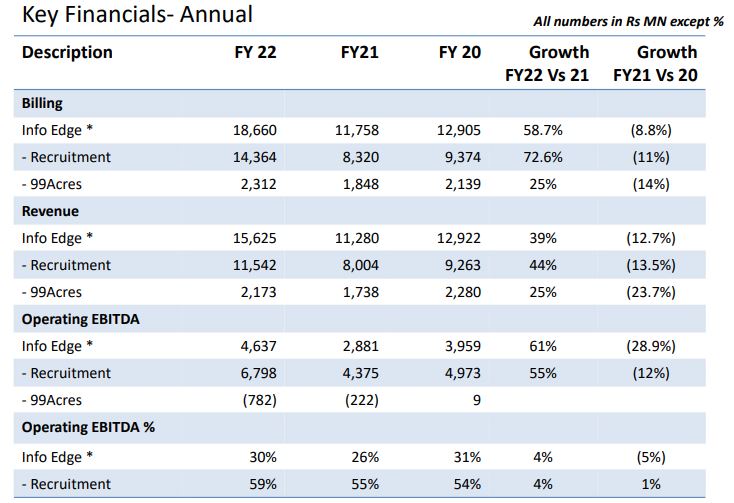 Naukri also saw its billing surge 72.6% to INR 1436 Cr in FY22, largely on account of addition of billing of its acquired businesses of Zwayam and Do Select. The real estate platform’s yearly billing for FY22 stood at INR 231.2 Cr, up nearly 25% on a yearly basis.

“We are experiencing strong tailwinds in recruitment and real estate verticals. Post pandemic the gap between supply and demand of skills has increased globally. We expect this trend to continue in the mid to long term and will create demand for platforms like naukri”, Info Edge managing director (MD) and chief executive officer (CEO) Hitesh Oberoi said. 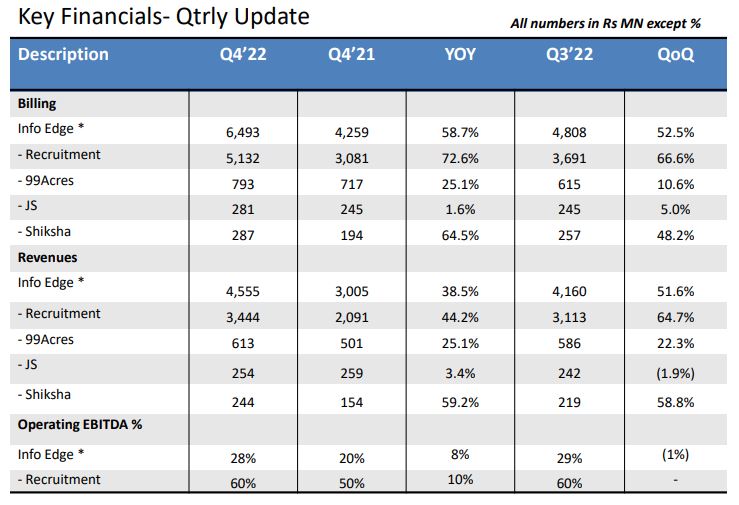