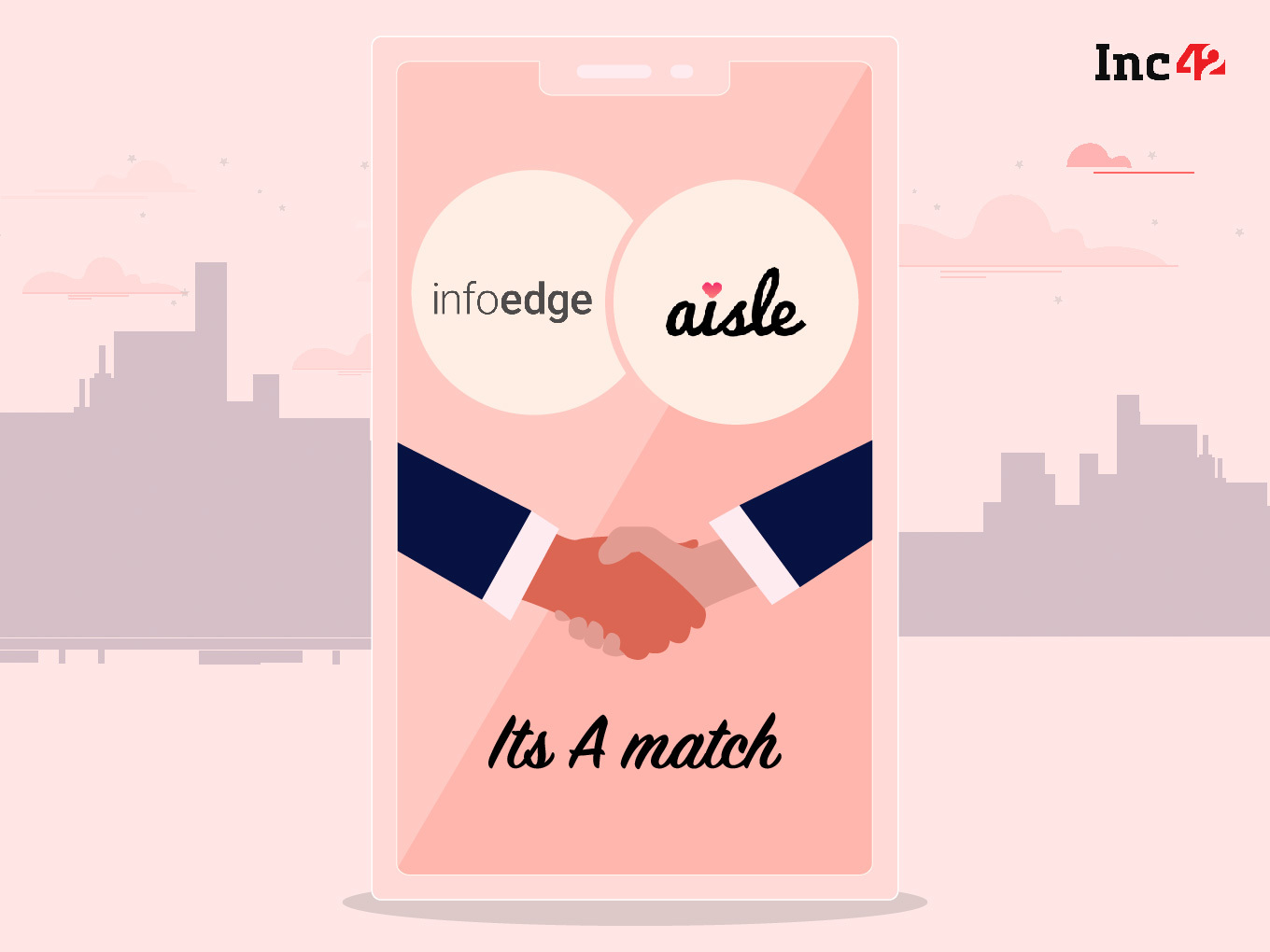 With this, Info Edge will become the largest stakeholder in Aisle

The total aggregated share of Info Edge in the startup will rise to 76%, making it the single largest stakeholder.

According to the filings, the objective of the investment is to expand the product portfolio and create further segments across the four platforms the startup has.

“As part of the Company’s strategic investments, the investment would help the Company to strengthen its offerings in the matchmaking segment by addressing the needs of people of different age groups and beliefs, searching for a suitable match for them,” Info Edge’s filings with the BSE read.

In January, Inc42 reported that Info Edge will acquire Aisle in 2022, for INR 150 Cr, and the recent developments have pointed to the same.

However, the only difference here is that back then, Info Edge and Aisle were in talks for the acquisition of the latter in two tranches of INR 75 Cr each in a deal worth INR 150 Cr.

During the last financial year, Aisle clocked a turnover of INR 7.56 Cr, slightly lower than INR 7.60 Cr it earned the year before. The startup had turned profitable in FY20.

Founded in 2014 by Able Joseph, Aisle is an Indian dating apps startup, and right now, operates four dating platforms under its portfolio. The startup prefers to call itself a ‘high-intent’ dating app for people looking for a serious relationship rather than a casual one.

The seven-year-old dating app had last raised an undisclosed amount in its Pre-Series A round in early 2021. The round was led by Anas Rahman, founder and MD of Hurun India and early-stage investor Konglo Ventures’ founder Vinod Jose. It also counts CIO Angel Network, White Unicorn Ventures, and LetsVenture as its investors.

According to Able, the earliest investors in Aisle received ~7x return on investment.

The startup registered a tremendous increase in its user bases when the Indian government enforced lockdown restrictions to curb the growing cases of Covid-19. According to a ToI report, during the second wave of the pandemic, Aisle saw a 28% rise in the number of users.

According to a Statista report, revenue generated by dating apps in India will reach $559 Mn in 2022, the second-largest market in terms of revenue generation, behind the US with an estimated $829 Mn revenue in 2022.

It is to be noted that Info Edge runs the matchmaking platform Jeevansathi. Jeevansathi is a subscription-based platform to connect prospects for matrimony. It also claims to offer AI-based recommendations and online verification of profiles, along with features such as video profiles, audio/video calling, among others.

Per a Statista report, the matrimonial site had revenue of INR 968.96 Mn during the last fiscal, a growth of 13% from the revenue in 2020. Info Edge will most likely roll up its sleeves and get to work developing its matchmaking business, with the latest acquisition of Aisle.