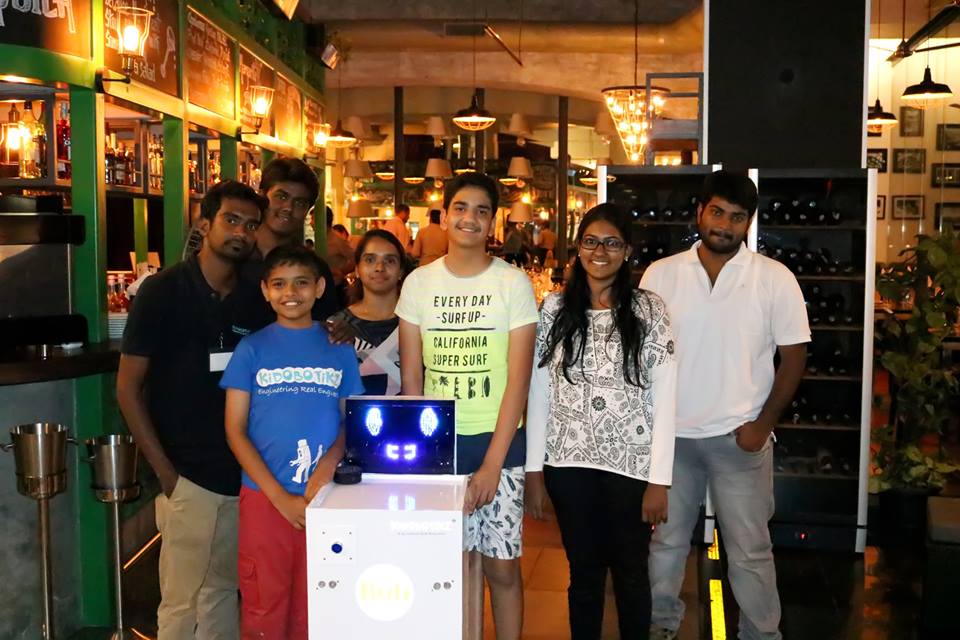 While Millennials and Baby Boomers, as a generation, are still fretting over the future of jobs when AI takes over our lives at an alarming pace, there is another generation that is already making those robots. Unlike most teenagers who hang out at malls, armed with the latest cell phones and gadgets, there are some who are building technology that can change the very face of those malls.

Arjun (age 13), Anish (12), Srivatsan (13) and Varsha (20) are four such robotic enthusiasts who are the brains behind the first food-serving robot named Butler ‘O’ Bistro (BOB) in Bengaluru’s VR mall. 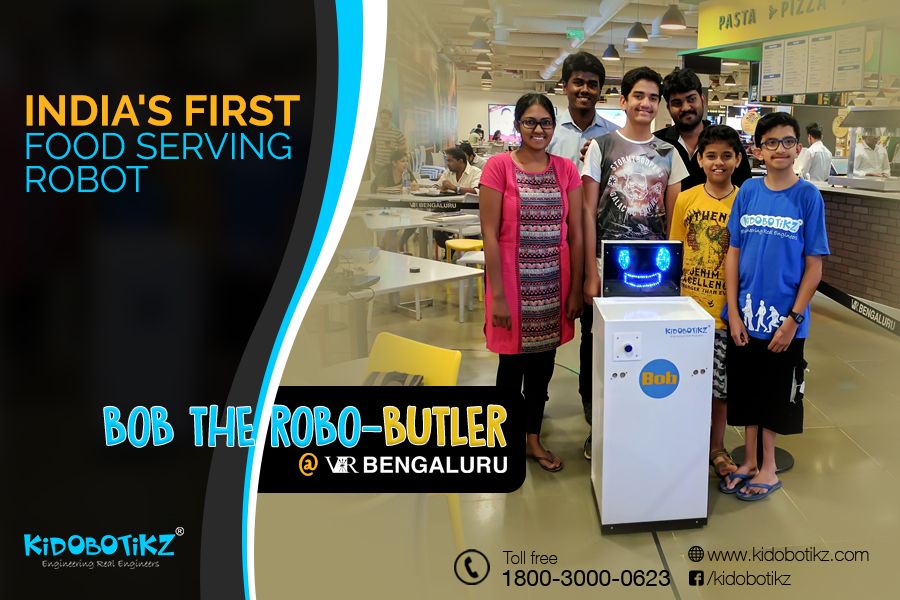 The four youngsters are community members of Kidobotikz or SP Robotics – an edtech startup which provides robotic education to school and college students. The startup provides robotics education (practical experiments with mechanical, electronics, programming and algorithm framing) – a multi-disciplinary engineering platform with enough fun quotient to school students from age 12 to 17 under the brand name called Kidobotikz.

And it’s their association with Kidobotikz over a real-time live project that led these four youngsters to develop India’s first food serving robot BOB –  from their homes.

Serving With A Smile And A Bot

So, here’s how BOB looks to replace the ordinary waiter/server in a restaurant. 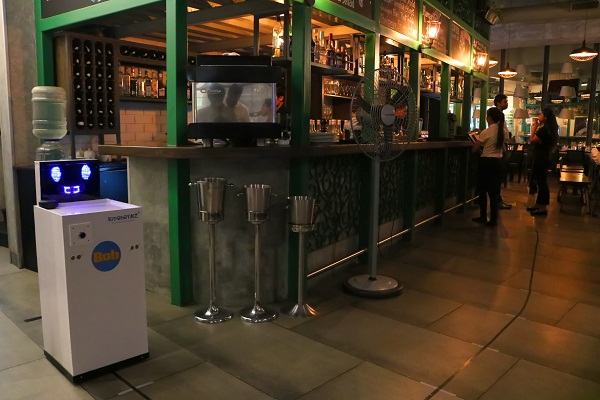 Once a customer orders food at the counter, there is no more need to wait and walk all the way back to the counter to collect it. The food, which is readied in the kitchen, is placed on the robot. After a go-ahead, BOB begins its journey along the predetermined route from the kitchen to the tables. BOB is also equipped with ultrasonic sensors that gauge the distance between itself and passers-by. Using wheels for traction, it follows a line embedded on the floor to move between locations. 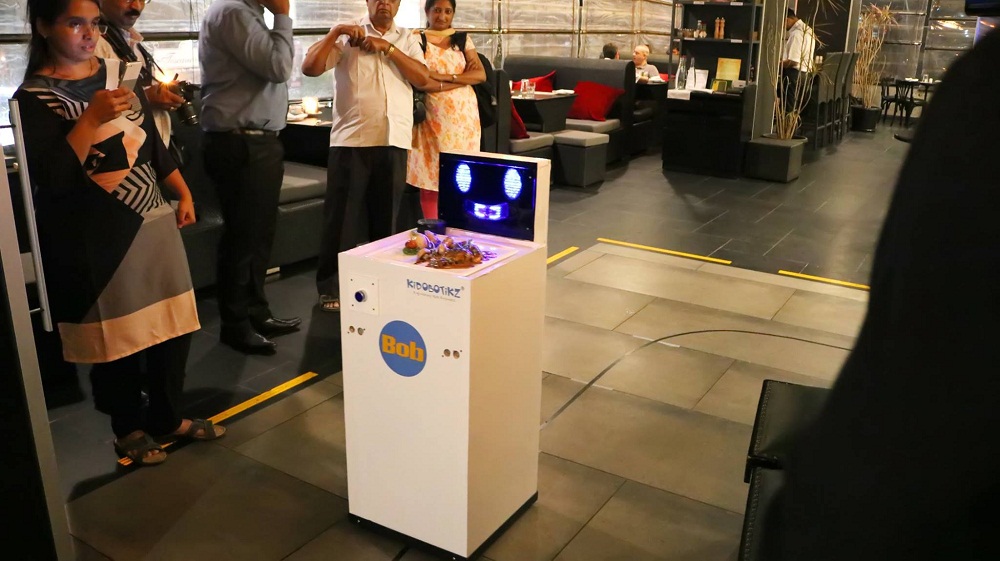 The journey itself is very interesting: the robot follows pathways etched on the floor, which are nothing but black-coloured tapes. The robot is guided by those lines. When the server is keeping the food on the robot, he will select which table it has to go to. So, accordingly the robot will take the particular turn and go to that particular table.

Once the customer takes the food and the food tray has been emptied, he can press the button which reads thank you, and the robot will make its way back to the designated place in the kitchen. 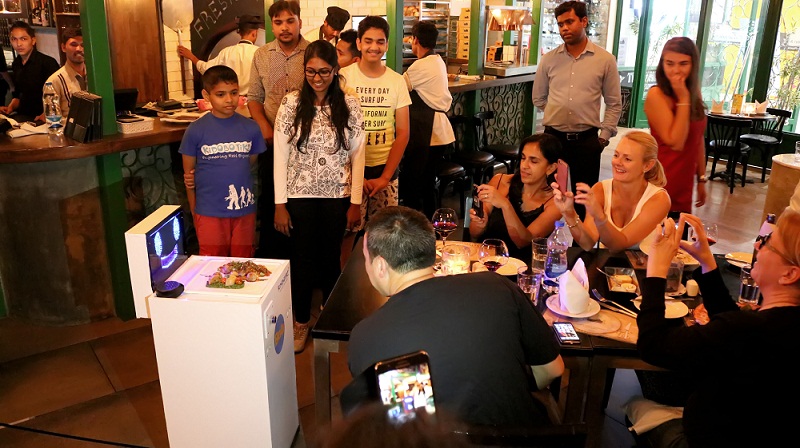 As of now, BOB will be placed at the food court of VR Mall in Bengaluru for the ongoing food fest.

Sneha Priya, who co-founded Kidobotikz along with Pranavan Santhanakrishnan in 2012 spoke to Inc42 from Mauritius, where she is participating in a robotics challenge. She revealed that the Chennai-based startup, which runs an online education platform, has built out AI which personalises learning for kids for 11 years and above, track the skills he/she can be good in. 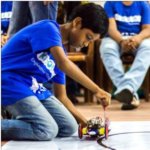 The startup organises community activities like competitions, internships etc. and one such activity is real-time projects. So, whatever the students have learnt as a concept and done on a small scale, they are given an opportunity to implement on a bigger scale and in real time. That’s when they find the real challenges. And that’s how the four youngsters got an opportunity to be part of this real-time project.

Having grabbed the opportunity, it took them around 2.5 months to ideate and complete the robot. Anish worked on the mechanical designing (the structure) and electronics design (sensor placements, face design, microcontroller wirings etc.) and Arjun gave the brain to the robot by coding the logics to complete the task. The kids worked mostly on weekends.

So, while Arjun’s father helped in making the structure with wood as he loves carpentry and has a small workshop setup in his home, Kidobotikz engineers aided in implementing complex algorithms and the technical support to make it a fully functional real-time robot.  Additionally, it roped in VR Mall in the picture to put BOB into action.

Sneha revealed that the pilot robot cost around $1.5K(INR 1 Lakh) to prototype. On asked about plans of commercialising it, she revealed that they have obtained a certain set of copyrights and patents that they plan to put on the students names.  However, they will be giving the contract to someone else to manufacture and develop it.

The reason is simple.

“We are basically an education company. We will stick to that,” she explains.

Readying The Younger Generation For A Future Full Of Robotics

But, of course, the startup plans on facilitating more such innovations through its projects. For instance, the Chennai community of the startup made the Swachh bot or the beach-cleaning bot and Agri Bot (for weeding). Currently, over 2000+ students work with Kidobotikz. The startup has sold over 3K of its kits that concentrate on teaching Electronics, Mechanics, and Programming. Over 35% of its customers are outside India. Last March, the startup raised $309K(INR 2 Cr) funding from Indian Angel Network and The Chennai Angels.

For Pranavan and Sneha Priya – who always wanted to decrease the usage of man-power for monotonous, hazardous, and unstable works and rather use those brains for developing technologies for the future – teaching kids robotics and automation is the way forward.

She sums the startup’s mission statement with, “We want the community to keep innovating, for any kind of problem that exists. We want to help them give them solutions so that they understand the design thinking and process. These are the essential things required for the future so that today’s younger generation is ready for the real future. The future is going to be full of robotic automations and lesser manual labour. So, kids have to be equipped with the right skills to go forward.”

With kids developing these new age robots and more, rather than being afraid of AI taking over less complex future jobs, Pranavan and Sneha sure seem to be doing a great job of it.