Indian Startups Are Becoming Unicorn One Year Faster In 2021

Indian Startups Are Becoming Unicorn One Year Faster In 2021 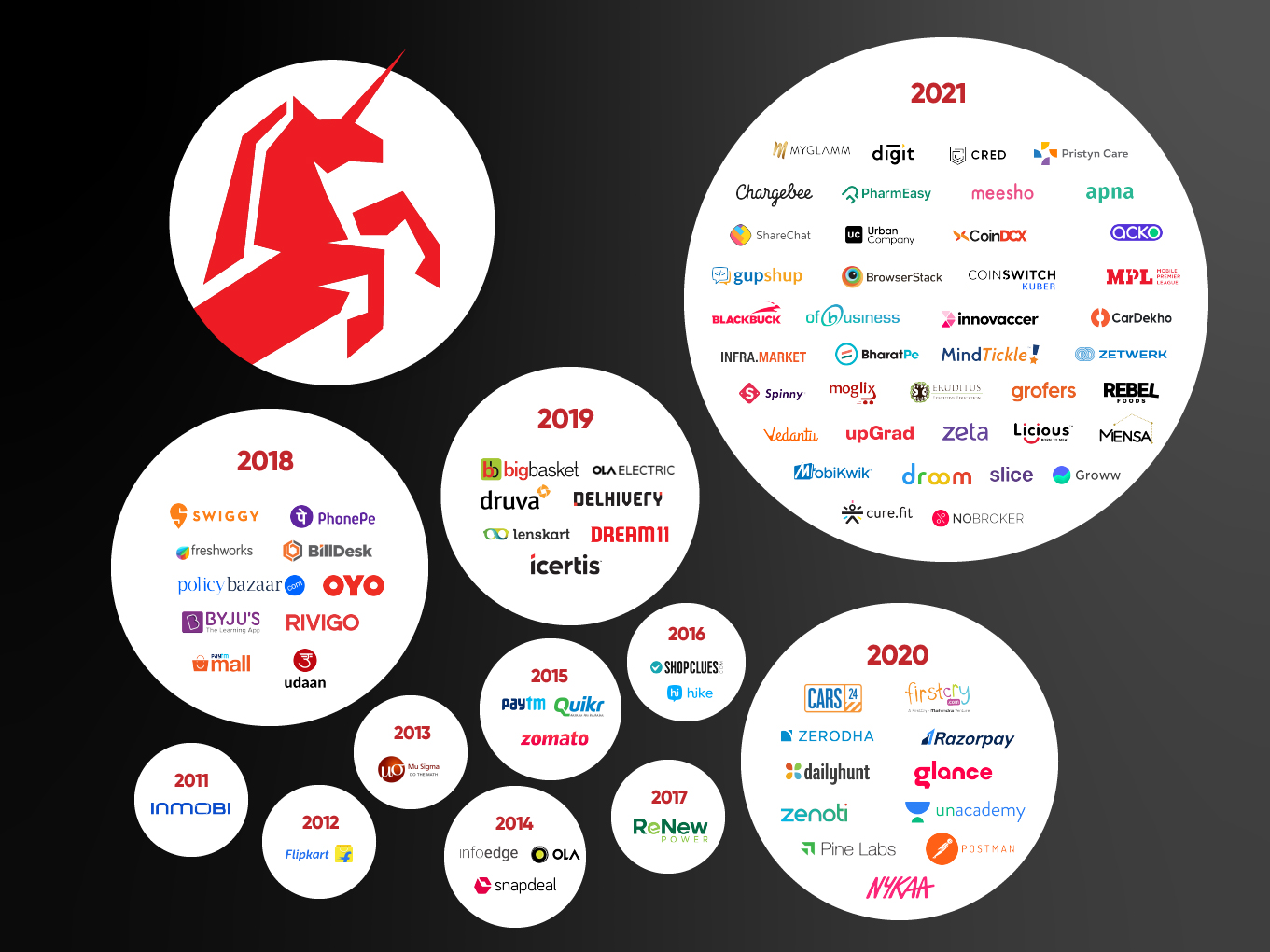 Startups founded before 2011 took an average of 9.3 years from the date of inception to enter the unicorn club

Startups founded in and after 2012 took an average of 4.8 years to cross a billion dollar valuation

Startups which entered the unicorn club between 2012 and 2020 took an average of 7.5 years, whereas startups becoming unicorn in 2021 have taken an average of 6.6 years

The Indian startup ecosystem has come a long way.

Having seen the launch of 55K+ startups to date, India is home to more than 38K+ active startups, making it the third-largest startup ecosystem in the world after China and the US. The ecosystem which mostly began in the year 2007-2008 with the launch of Flipkart and Zomato later gained momentum in 2014-2015, crossing the $100 Bn mark in total funding in October 2021.

With increasing cash inflow, it’s a no-brainer that India started seeing the rise of unicorns, startups with or more than $1 Bn valuation. The ecosystem celebrated its first unicorn with Naveen Tewari’s InMobi in 2011, followed by the country’s indigenous built ecommerce platform Flipkart in 2012.

Since then, there has been no looking back. India at present has 82 startups that have ever entered the unicorn club (of which few are currently under-$1 Bn, got acquired or listed) about 50% or say 40 were produced in 2021 itself.

Let’s look at how over the years India produced unicorns! 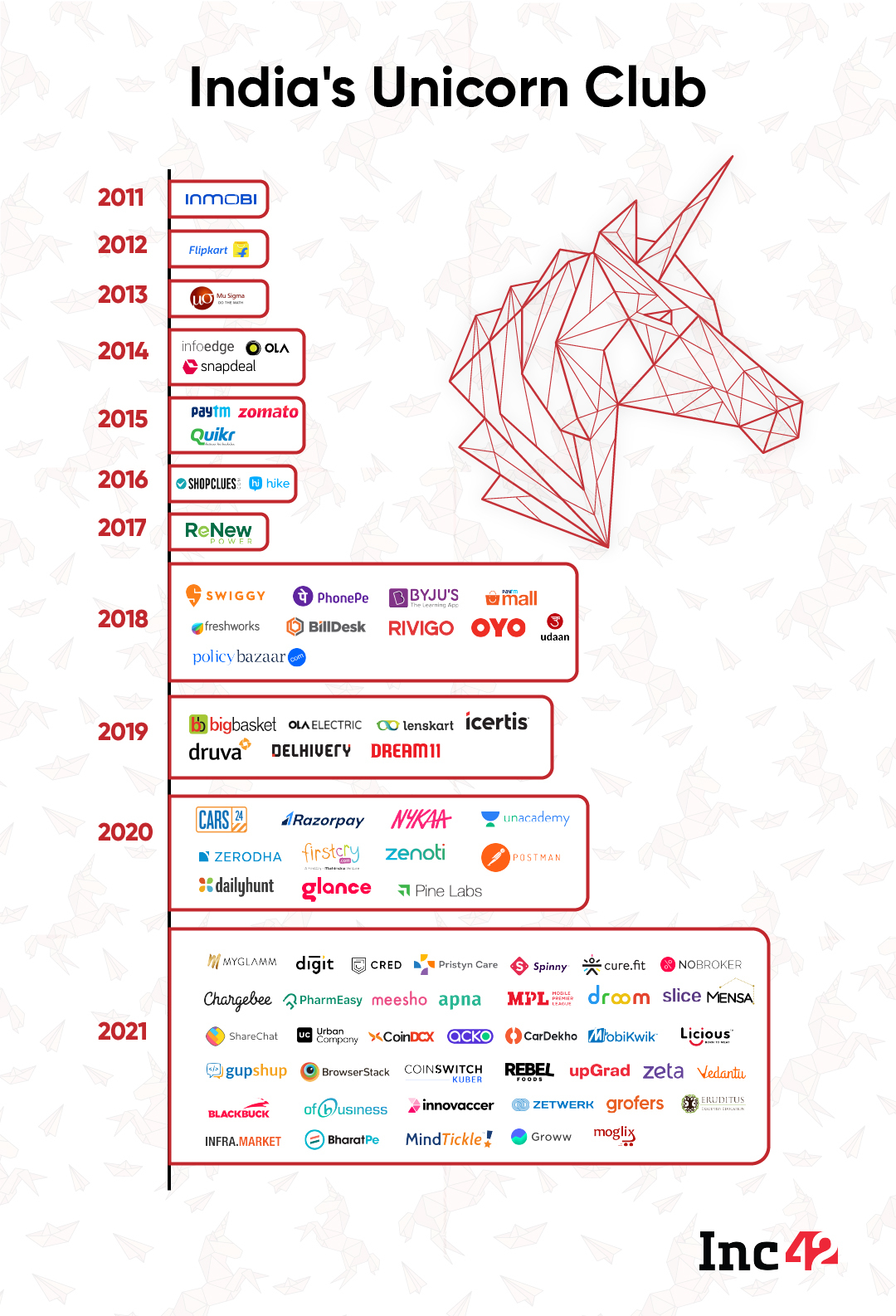 Until 2021, the year 2020 recorded the highest number of unicorns being born. The year saw the rise of 11 unicorns with Unacademy, Zerodha, Razorpay, Postman, Pine Labs, Nykaa, Glance, FirstCry, DailyHunt, Cars24, and Zenoti.

Much has been spoken about 2021 as the country broke the record of 2020 within the first four months itself. The year started with Digit Insurance entering the club, followed by Innovaccer. The second week of April saw the rise of 6 unicorns. The ecosystem didn’t lose the momentum as, as of 9th December, we have 40 unicorns and still a few weeks to go to wind up the year.

Starting Up To Unicorn: How Long Do Indian Startups Take?

Not only has the number of startups entering the celebrated unicorn club has increased, but also the time-taken to achieve this feat has also dropped drastically over the course of years.

It is clearly evident that the new-age tech startups have been hitting the billion-dollar valuation mark at a faster pace than their older counterparts. For instance, almost 44 startups in the Indian unicorn club have taken less than 6 years to attain unicorn status.

Overall, if we look at the startups founded before 2011, the time taken to enter the unicorn club stands at 9.3 years. For instance, Druva, Icertis, Dailyhunt, BYJU’s, BrowserStack, Chargebee, Rebel Foods, Mindtickle, all took around 10 years to become unicorns.

However, it has been found that the startup founded in and after 2012 took an average of 4.8 years to cross a billion-dollar valuation.

The Inc42 team dug deeper to find out that the startup which entered the unicorn club between 2012 and 2020 took an average of 7.5 years. For example, Zomato, BigBasket, IPO-bound Delhivery, and Lenskart have taken an average of 8 years.

Here, interesting to note is that startups are taking an average time of only 6.6 years to become unicorns in 2021, meaning that the 2021 startups becoming unicorns one year faster than their peers.

One of the reasons behind the rise of unicorns and the drop in time taken to cross a billion-dollar valuation is the rise in digitisation bolstered by the rise of internet penetration across the country. Investors are placing high bets on these startups to help them capture the market, build products and grow. Once the startup matures, it goes for a public listing, giving a grand return on investment to their investors.