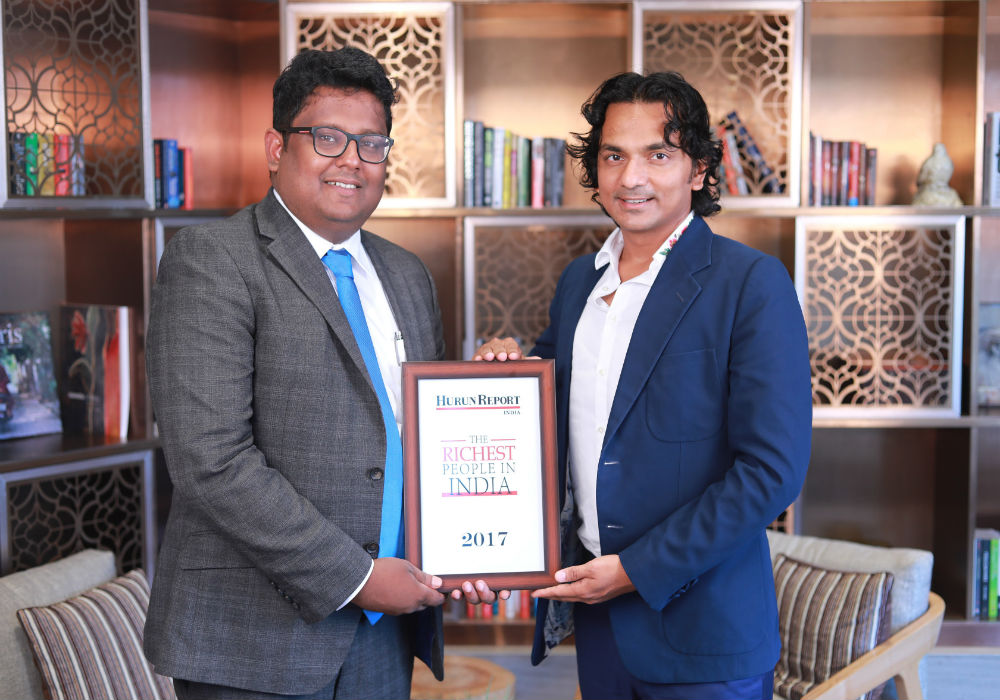 Shanghai-based Hurun Research Institute has released the 6th “Hurun India Rich List 2017”, a list of the richest people in India with a cut-off at $153 Mn (INR 1,000 Cr). Divyank Turakhia of Directi Group who bootstrapped an adtech company Media.net is ranked one on “Self-made under 40” list with wealth $1.76 Bn (INR11,500 Cr). The startup Media.net was later acquired by Chinese tech conglomerate Miteno Communication Technology for $900 Mn. Paytm founder Vijay Shekhar Sharma, Flipkart founders Binny Bansal and Sachin Bansal are also on the list along with Byju Ravindran of Bengaluru-based edtech startup Think And Learn.

Kunal Bahl, Founder, Snapdeal, and Bhavish Aggarwal, Founder, Ola have been knocked out of the list owing to the huge losses registered by Snapdeal and Ola.

All the under 40 entrepreneurs in Hurun India Rich List 2017 derive their wealth from innovative technological ventures.

Except for Divyank, all the rest of the entrepreneurs have raised money from some of the top international funds. The report states that all the young entrepreneurs listed in Hurun India Rich List 2016 are still active in their respective businesses.

Hurun has published India’s Richest persons’ list with a cut-off at $153 Mn. With the net worth at $39.4 Bn Mukesh Ambani (60), Chairman Reliance Group ranked first in the list for the sixth consecutive year. Ambani’s wealth is thrice to the next Dilip Shanghvi, Chairman, Sun Pharma whose net worth is $13.6 Bn. In Harun’s global rich list, published earlier this year, Ambani secured 29th position globally.

‘Wealth Creation Not Impacted By Demonetisation And GST Implementation’

In the sectoral analysis, Hurun Research Institute concludes that Indian government’s big moves such as, demonetisation and GST that ostensibly made India’s GDP tumbled to 5.7% have not impacted the wealth creation in the organised sector. “In fact, going by the trend in the list, the aforementioned factors seems to have positively impacted the mega-rich and their companies. Despite a solid performance of the corporates, a declining trend in national GDP growth points to impact of such schemes on the unorganized sectors”, said Anas. On the other hand, fintech startups Paytm and Razorpay’s market base has increased ten times because of demonetisation.

All the five companies in the list shown above cater to India’s Internet user base. Having topped in the ‘self-made under 40’ list, young lad Divyank’s journey as an entrepreneur has been exceptional. At the age of 16, Divyank, along with his brother Bhavin Turakhia, founded an IT services company Directi Group in 1998. The company soon started catering to the global consumers, and today has its offices run across the world. In 2016, Divyank’s another startup Media.Net acquisition by Miteno Communication Technology was the third largest adtech deal in the world.

Besides Bansals and Paytm founder Vijay Shekhar Sharma, Byju Ravindran has also made to the self-made under 40 list. With the help of his own eight students, Byju Ravindran, a teacher by profession founded an edtech startup Think And Learn (BYJU App) to address learning as something engaging and personalized. The company has since then raised funds from IFC, a member of World Bank, Chan Zuckerberg’s Initiative, Sequoia Capital and Tencent.

The report has also mentioned the fact that online sales were nearly flat in 2016, after tripling in 2015 and doubling in 2014. The founders of ecommerce companies have shifted their focus from sales to profits by ceasing subsidised unprofitable sales and concentrating on limiting their losses. Some of the major companies accepted investment based on valuations significantly below their peaks, are now the new normal.

Currently, of India’s 1.2 Bn population, only a small portion of 1/5th are shopping online. This is a good opportunity for ecommerce companies. The entry of heavily funded Amazon and Alibaba has resulted in a “bloodbath” in Indian ecommerce. For instance, Snapdeal which had the valuation of US$6.5 Bn at its speak was struggling to achieve a $1 Bn valuation in 2017. Flipkart, despite having registered huge loss last year, has received huge funds from Microsoft and SoftBank. SoftBank helped not only Flipkart founders Binny Bansal and Sachin Bansal, but also Paytm’s Vijay Shekhar to successfully retain their names in the Hurun Rich List 2017, self-made under 40.