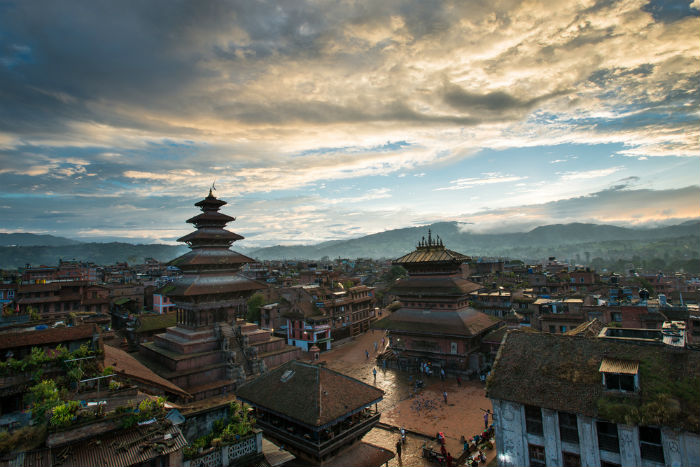 Nepal has suffered its worst natural disaster in 80 years, when earthquake measuring 7.8 on the Richter scale struck this country on April 25, 2015. Across the affected region, which stretches into India and Tibet, the death toll may cross 10,000 mark. As of now, more than 6000 people have been declared dead, and more than 200 ancient monuments, buildings and palaces have been razed to ground. It was the most powerful disaster to strike Nepal since the 1934 Nepal–Bihar earthquake.

During this hard time, India’s mammoth presence with Operation Maitri for rescue and relief on the ground in Nepal within hours after this powerful earthquake is a great example of humanitarian diplomacy and social responsibility as a neighbouring country. And it’s not just the Indian army, this widespread devastation has dwarfed India Inc as well as startups ecosystem pouring aid into the Himalayan country. Indian startups have come forward to help Nepal during this time. Lets have a look at how these startups are helping out the affected people.

Among the startup ecosystem, Paytm was probably the first Indian startup which come out and raised a helping hands for providing relief to the victims. It started an offer wherein they will match every contribution made by their customers for the Nepal Earthquake Relief Fund. 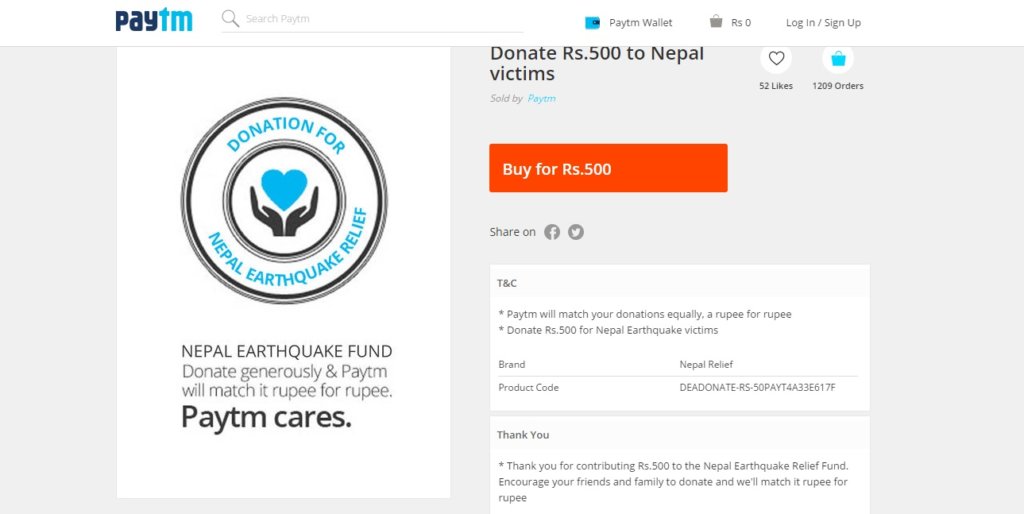 ShopClues has put up a donation page on its website meant for Nepal earthquake victims and decided to match every rupee donated. The collected sum will be contributed to the World Food Programme (WFP).

Oxigen, the startup has offered 1% of its daily transactions as a donation to Nepal victims every day for the coming month. 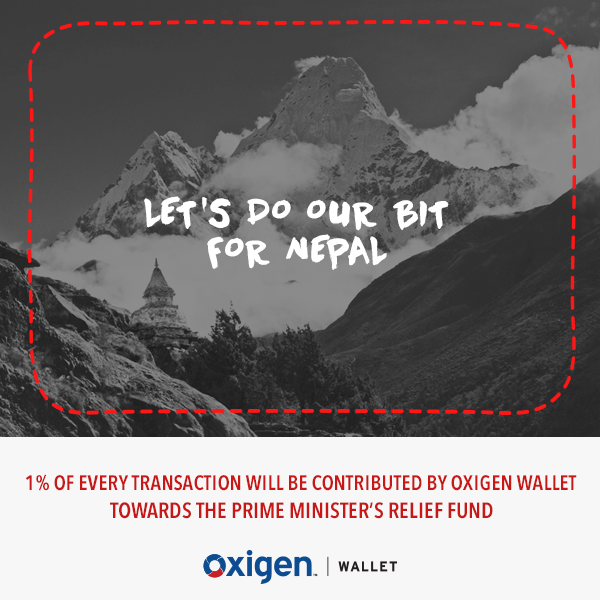 Freecharge is encouraging its users to give a missed call at 9590666222. And for every missed call they receive, they will contribute INR 20 to the Prime Minister Relief Fund. Besides, the caller will also get a free recharge voucher of INR 20. 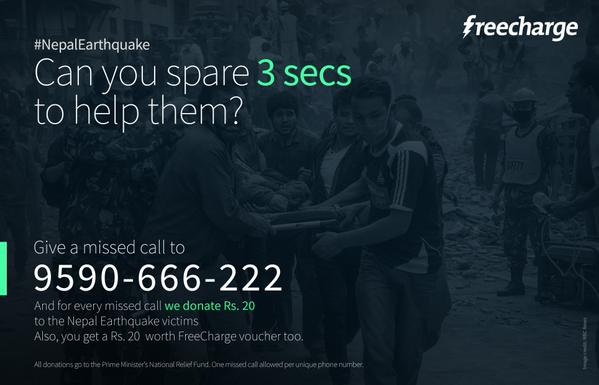 Jombay, a talent assessment and analytics company, announced that it will start ‘counselling chat rooms’ for students in Nepal in partnership with mig33. It is also looking to fund travel plans along with medical and food supplies of 25 Nepalese watchmen in Pune so they can travel home to meet their families at the earliest.

IdeaForge, a startup that makes drones, has deployed an unmanned aerial vehicle system, along with the National Disaster Response Force (NDRF), to Kathmandu and other villages in Nepal for site surveillance to help with the rescue efforts.

Ketto has partnered with NGO Care International who will be working with its partners CareIndia and CareNepal to provide basic support. All campaigns for this would be listed under this microsite – helpnepal.ketto.org. 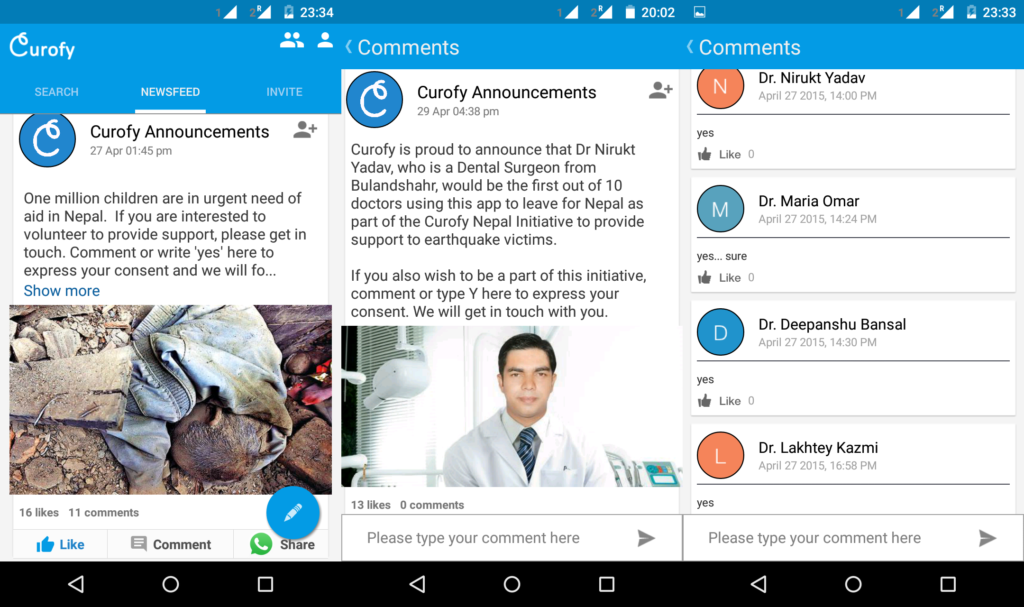 India’s leading doctors’ networking app, Curofy is sending 10 doctors using the app to provide medical support and treatment to those affected by the earthquake in Nepal. Named as Curofy Nepal Initiative, the app invited consent from its users comprising of all medical specialties to volunteer for Nepal. In order to ensure seamless work in the affected areas, Curofy has also collaborated with Pehl, an NGO, which has been involved in medical relief and treatment work for some time now.

Uber, though technically not an Indian startup but still we feel proud to add them in this list, the Indian arm of the cab hailing app is connecting donations directly to The Prime Minister’s Relief Fund across 11 Indian cities in an effort to help raise funds. You can contribute right through the Uber app by entering any/all of the codes below until May 3rd, 2015. We’ll automatically charge your account.

Ola is leveraging its network of customers across the country to help people get involved in the relief efforts. One can click on Ola money, enter the recharge/donation amount use the Promo code and apply code “NEPAL”. Once the account is recharged, Ola will divert the amount to the PM’s relief fund. 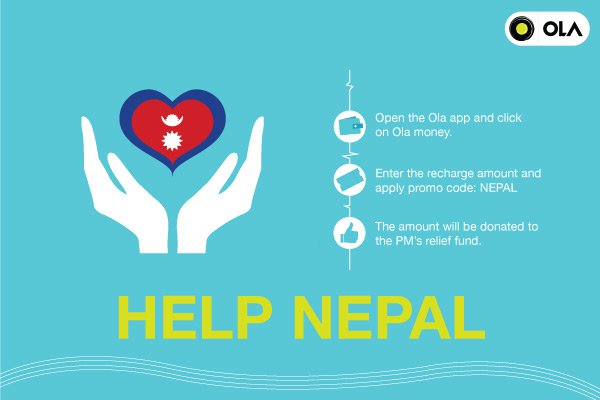 Flipkart has launched a relief campaign supporting Goonj’s ‘Rahat Quake’ relief & rehabilitation efforts in Nepal. The monetary contribution done by people will be matched by Flipkart and will be given to Goonj in the form of essential relief material. 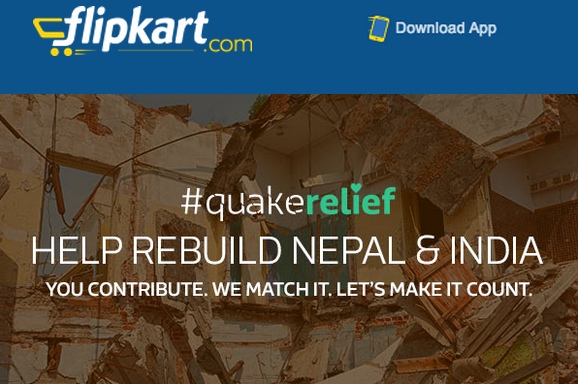 Besides, India’s leading telecom operators Airtel, Vodafone, Aircel, Tata DoCoMo, BSNL, MTNL had also offered either free or discounted calls within their network from India to Nepal for a limited time.

We at Inc42, would urge people across India to support a fundraising drive to help the thousands of people caught up in the devastating Nepal earthquake. During this tough time, they need us as natural disaster can hit any nation. You can also contribute to Prime Minister’s National Relief Fund directly.