Bengaluru-based genomics research and diagnostics company MedGenome has secured $30 Mn in Series C financing led by Sequoia India and Sofina s.a. The round also saw participation from Zodius Capital, Kris Gopalakrishnan of Infosys, and Lakshmi Narayanan, former CEO of Cognizant. The healthtech startup will use the proceeds to accelerate development of its affordable diagnostics tests.

Also, MedGenome will tackle market penetration by increasing customer awareness on the importance of genetic tests. Additionally, the funding will also be used to broaden biomarker discovery programmes.

Sam Santhosh, founder and Chairman of MedGenome stated, “Precision medicine is the ultimate goal of clinicians and patients alike which can be enabled through extensive biomarker discovery. MedGenome has established leadership in genetic diagnostics for inherited diseases in India. We will now expand DNA-based testing to cover infectious diseases like tuberculosis.”

The genomics-driven research and diagnostics company aims to improve global health by decoding the genetic information contained in an individual’s genome. Its access to genomics data with clinical and phenotypic data provides insights into complex diseases at the genetic and molecular level to facilitate research in personalised healthcare.

MedGenome And The HealthTech Space

With over a million babies born each year with genetic disorders, India carries a huge genetic disorder burden. It is this burden that MedGenome aims to reduce through its services. The company’s services are being leveraged by pharmaceutical and biotech companies across the globe. Its diagnostics tests include many “firsts” for genetic diagnostics in India, including first liquid biopsy “OncoTrack” for monitoring cancer treatment, a non-invasive prenatal screening test (NIPT) for pregnant women, and whole exome sequencing test for identifying mutations in rare diseases.

Sequoia Capital, which is one of its early investors, believes that MedGenome continues to emerge as a leading genomics company bringing affordable and high-quality genetic testing to emerging market consumers. Abhay Pandey, Managing Director at Sequoia Capital India Advisors stated, “Sequoia is excited to continue this partnership and we are committed to helping MedGenome strengthen its proposition to consumers and doctors in these markets and become a significant player globally in the arena of precision medicine through data from the currently underrepresented emerging markets including India”. 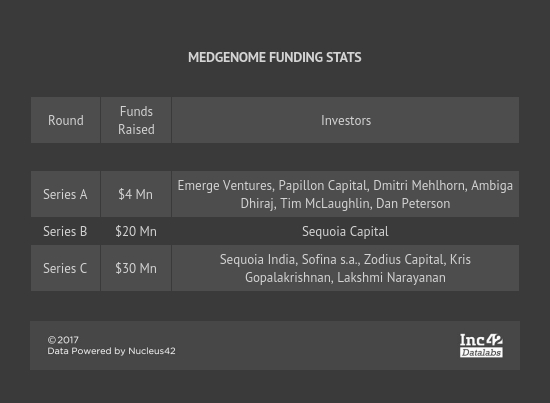 This month also saw funding poured into yet another Bengaluru-based healthcare startup.  Medinfi raised $125K in a fresh round of funding from Angel investors in Singapore, Germany and the Middle East last week.

In April this year, Bengaluru-based AI startup NIRAMAI Health Analytix had raised an undisclosed amount of funding in a Seed round led by pi Ventures with participation from Ankur Capital, Axilor Ventures, 500 Startups and Flipkart co-founder Binny Bansal. Gurugram-based medical assistance company Credihealth also raised $1.5 Mn in a Pre-Series A funding round from Tolaram Inc. in the same month from the family office investment arm of Tolaram Group and Mountain Pine Capital along with others.

Read here to know what ails the healthtech space in India.

As per Inc42 DataLabs, 183 healthcare startups have been funded in the period of 2014-2016 (till October 2016), with the sector seeing an infusion of around $600 Mn investment. The Indian healthcare market, which is worth $100 Bn, is likely to grow at 23% CAGR to reach $280 Bn by 2020, as per a Deloitte 2016 report. While the sector calls for major reforms, it will be interesting to see how far the clutch of healthtech startups including diagnostic startup MedGenome are able to penetrate with their services.