Though there has been no update from the company about the same, but a lot of buzz has been created on social media about the acquisition, a few of which even directly point out that, Baarzo has already been acquired. 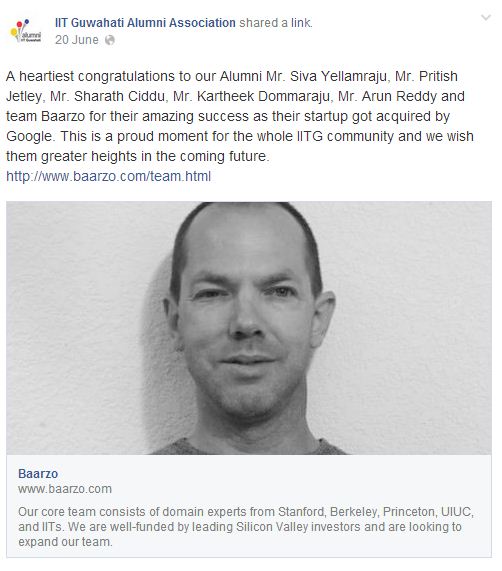 “We don’t comment on rumors or speculation.” said Google spokesperson in a response to Techcrunch.

Google Chairman Eric Schmidt is said to have been wholly impressed by a demo of the tech by co-founder and CTO Siva Yellamrajuat at Stanford’s Graduate School of Business.

According to Baarzo’s profile on AngelList, it’s investors include UllasNaik of Streamlined Ventures and Matt Sonsini of Sobrato Capital. The startup was also part of StartX, the accelerator for the Stanford community.

Unlike Google or Youtube searches, which just evaluate the text around the video, the Baarzo search technology analyzes the video content recognizing hundreds of thousands of objects and millions of faces and locates the precise moment in the video when the search objects interact in the way you specified. As the company does not have open signups so it is unclear how well the service works.

Baarzo’s core team consist of domain experts from Stanford, Berkeley, Carnegie Mellon, UIUC and IITs. Though its unclear by now, that why Google be interested in Baarzo’s acquisition, but it appears that its technology be used or implemented on Youtube.

In past few days, Google had acquired a number of companies including plug-and-play security camera company, Dropcam.