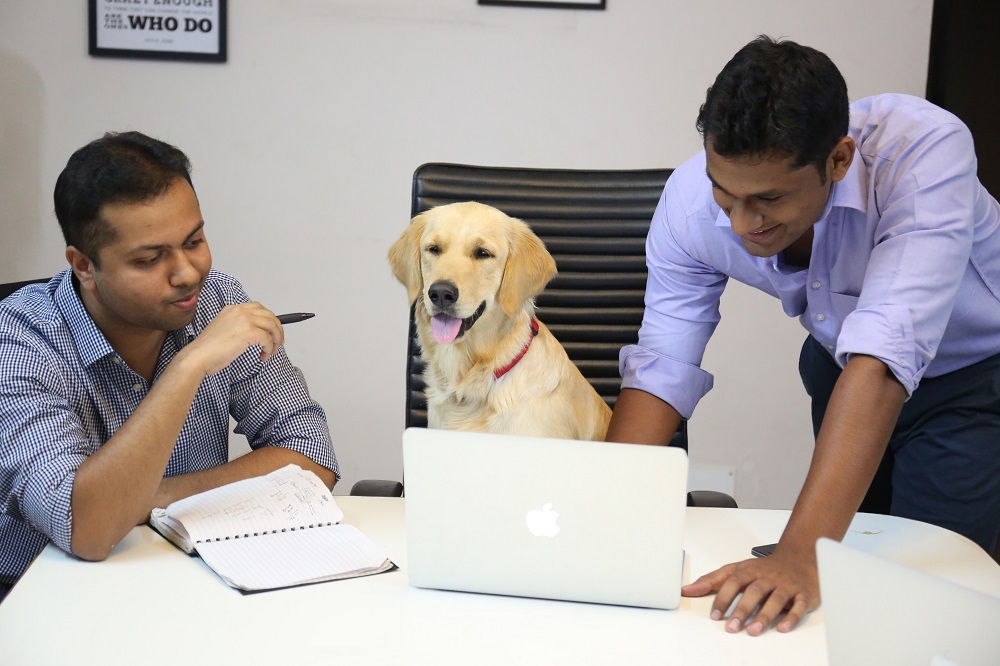 “I’m so unfamiliar with the gym, I call it James!” – Ellen Degeneres

Well! This is the story of many people around us. While some get burdened with twelve-hour workdays and stretched schedules, others just find ‘gymming’ a bit too expensive for their pockets. This further complements the fact that the rate of fitness penetration in India is just 0.37% which includes only those having a fitness membership in a gym or a fitness club. Even globally, there are 67% people with gym memberships who never use them.

He was joined by another Ex-Goldman Sachs executive and IIM Kozhikode graduate, Avijeet Alagathi, who also happens to be an investor in Devi Prasad’s first startup, Candidly Couture – a women’s fashion brand. It was here that Devi forged strong bonds and found a believer in his future co-founder. BYG was something Avijeet could instantly connect with and Devi Prasad was someone he knew is the perfect partner to work with.

The BYG team also considers Arya, the team’s pet dog, to be an official co-founding member – complete with her own special title of Co-founder and Chief Troublemaker.

How It All Started: When Gyms Forget About New Members

The idea of BYG originated when a close friend of Devi Prasad was asked almost the same price for a three-month gym membership that he was paying annually. Having been raised in a middle class, highly-disciplined family, Devi Prasad understood the fact of ‘limited income, limited spending’ very well.

So, he deep dived into the overall fitness segment and found that on the consumer side – extreme price variations and lack of transparency is a major problem to be dealt with. Plus, people need to be encouraged to step into the gym without much financial burden.

On the B2B side, he analysed that with all the promotion schemes on, an average gym spends no less than INR 1,500 to acquire each new customer. However, what actually happens is, in the first month they engage with each of the new members and then they forget them. Nobody even bothers to ask why he/she is missing the sessions. This ultimately leads to a drop in renewal rate to 20-25%, losing a client within a year.

Another, hilarious problem gyms face is – they often forget the renewal dates of the members. As Devi Prasad shared, “One of my friends and I were members of Gold’s Gym. As our renewal dates drew close, we expected a reminder. But it did not happen, even long after the actual date was crossed out. Apparently, my friend continued going to the gym for the entire year, without paying a single penny.”

He further added, “Since, they have no capacity utilisation problem, people come and work out for free. With the entire management being manually handled, there is lack of attendance tracking by 15-20%. Gyms know this is a problem, but they didn’t have any solution to it.”

The duo then conceptualised the idea of BYG in December 2015. A consumer app was launched in February 2016 to help users locate nearby gyms and fitness centres. And a web-based SaaS product for gyms was launched to help them manage processes more efficiently.

The Key Features: The App And The Web Product

The consumer app allows the user to find more than 40 kinds of fitness activities in nearby gyms, and fitness in five cities across India. It claims to make available the desired kind of membership from the app only, and at the lowest price.

“The sector suffers from pricing asymmetry, as here, it all depends on how long you are ready to linger there. What we are doing as an aggregator is basically making prices transparent, guaranteed lowest pricing, in almost 80% of our fitness centres, to make sure that each customer feels that it is affordable.”

It also offers a unique option of ‘Workout Now.’ This allows a user to opt for fitness sessions dynamically, with pricing per session starting from INR 50 taking into account how full or empty the gym is. Workout Now is primarily an option for two kinds of people – those who have never been to the gym till now and those who are travelling most of the time.

When asked about how instant bookings with the ‘Workout Now’ option are managed at the gym end, Devi Prasad explained, “Suppose the gym has a capacity of 100 persons. So, if there are 40 people in the gym, we can tell the business index of the gym is 40% and it’s a good gym to workout in real-time. If it’s 80%, then pricing will increase. People will receive a notification on mail and SMS. Also, a notification will be sent to gyms on when the next workout is scheduled for.”

On the business side, its SaaS product allows gyms to manage leads and members efficiently at one place and with timely automated notifications and updates. It allows the gym manager to track attendance and intervene in a timely manner in case of dropping attendance. Also, it helps in targeted marketing to prospective customers through the BYG app.

“They can send out notifications to members on a drop in the attendance, membership renewal and more. Gyms can filter customers via the app and can communicate very very easily. Also, we can analyse patterns of data, and can manage the business in a much better manner,” he said.

The business model works in two ways. On the B2C side, they have an average commission of 17% on every transaction. On the B2B side, for a new gym, the average commission is 30%. “For the gyms, this income we are giving them is completely incremental. Each penny we are giving to them is directly going to their profit line, because for every new customer they don’t have to purchase a new machine or employ a new trainer,” said Devi Prasad.

They also charge gyms for their SaaS-based product. As of now, roughly 15% to 20% gyms are paying for the web product and majority are on free trials. However, the founders expect to earn about INR 3,000 per month per gym, in the near future.

At present, BYG is spread across 2,700 fitness centres in five cities including Delhi/NCR, Mumbai, Bengaluru, Pune, and Bhubaneshwar. The platform serves close to 30,000 users with 59% repeat purchases.

BYG has grown 50X on topline in the past six months, as claimed by the founders.

When asked about the challenges, the founders believe that launching in five cities at the same time was the biggest challenge they faced and managed to overcome. “Every city was a startup of its own, and we had to build local level leadership, pitch differently in every market and conduct different themes of marketing,” added Avijeet.

Fundraising was another challenge. As Devi Prasad said, “We started our fundraising around the same time when Flipkart’s valuation was slashed. Despite having promising initial traction, and an experienced team we had to speak to almost 55 angel investors before finding our lead investor.”

Building the tech platform and finding right talent were a few other challenges that they faced in the initial months.

How SaaS Will Help BYG Stand Out From Competition

FitPass is the startup that competes closely with BYG. The platform connects consumers with nearby gyms and studios. As claimed by the founder Akshay Verma, it provides unlimited access to lakhs of fitness workouts with a monthly membership of  INR 999.  It has an association with 1250+ gyms like Gold’s Gym, Snap Fitness, etc., which can provide more than 100,000+ options with different types of workouts like yoga, dancing, gyming, aerobics, skating, martial arts etc.

BYG on the other hand, believes that its unique business model, dynamic pricing on Workout Now, and its SaaS product at the gym end – are the features that will help in standing out from the crowd.

As Devi Prasad said, “There are similar models in the industry, however no other player is aiming at the same goals as us. We believe that data science and data products can create tremendous value for users, and BYG plans to leverage that to improve the fitness industry.”

Pumping For Profits In 2018

The team further expects to grow another 2.5X over the next six months, and launch in international markets such as US, Brazil, Dubai, Singapore, and Hong Kong in 2017. It is also in talks with various sports and fitness manufacturers to act as a marketplace for their products.

Soon, the app will also integrate information on the daily workout regimes, weekly targets, nutrition requirements of the user and more. Also, many on the insurance side are looking forward to the fitness data gathered, which can, in the near future be used as a base for deciding premiums. It expects to be profitable by end of 2018 and is looking to raise Series A next year.

“We aim to become the first Fitness Data Company and use all the data we have to build a much better and enhanced product that creates immense value for all fitness enthusiasts. We look at Mindbody (NASDAQ-listed) as a company which is doing similar things in the B2B space in the US.”

The total amount of funding in the fitness industry in India has more than doubled in the last two years.  Since 2014, $37.21 Mn have been invested in 34 deals, $21.2 Mn alone being invested in 2016 in 10 deals. Also, the current fitness and slimming industry size in India is over $1.1 Bn and is growing at 20% a year with a limited set of organised players.

Suffice it to say, the health and fitness industry is ripe for the picking, in terms of both organisation and market share by startups with unique solutions that cater to both the business and end-user like BookYourGame and others of its ilk.