In yet another attempt to ensure the survival of its controversial free internet service, Free Basics (Internet.org), Facebook is asking people, coming to sign up for this service, to send an automated mail to Telecom Regulatory Authority of India (TRAI). This message highlights the merits of Free Basics and tells the regulatory body that the sender supports this service and the ‘Save Free Basics’ campaign – the subject of the mail is ‘I support Free Basics in India’.

As part of this campaign, the sender also gets to know who all among his/her friends have agreed to support, and also notifies them that the sender is now a supporter too.

Here’s how Facebook is roping in innocent users who come to its platform: 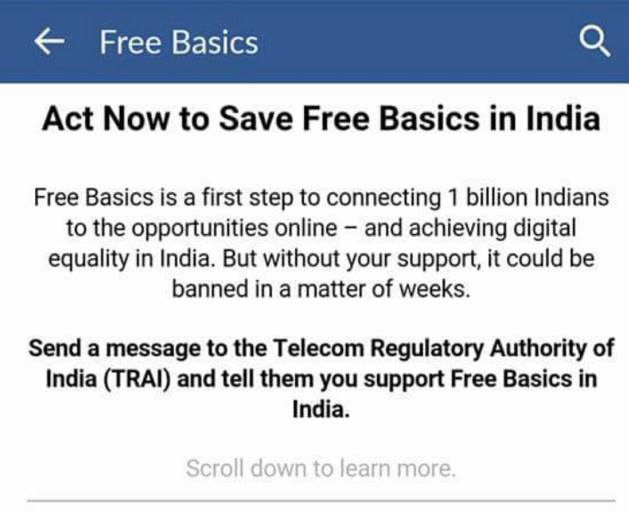 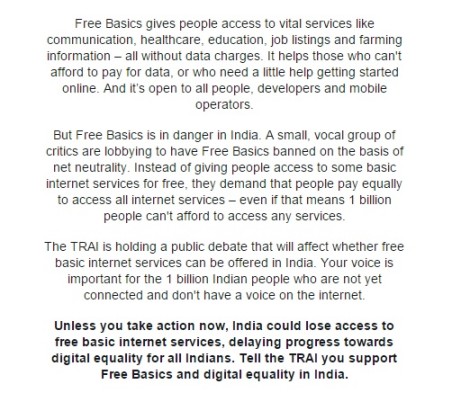 Here’s what the mail says: The activists supporting net-neutrality are asking users to change the body of the Facebook message to this.

According to a Facebook spokesperson, “Hundreds of millions of people in India use the Internet every day and understand the benefits it can bring. This campaign gives people the opportunity to support digital equality in India. It lets people speak in support of the one billion people in India who remain unconnected, and lets them participate in the public debate that is being held by The Telecom Regulatory Authority of India on differential pricing for data services. And it gives them the opportunity to support Free Basics, which is proven to bring more people online and accelerate full internet adoption.”

Some folks have even raised concerns that people are getting signed up for this campaign without actually doing it.

Facebook, however, claims that these allegations are false and released the following statement:

“Any claim that people are being auto-enrolled to support Free Basics only by scrolling, hovering over the send button or by only clicking the notification is 100% false.  A user must proactively click the send button to send an email.  This is proven in the source code of the product, which we will happily provide to TRAI. We support the right of critics to disagree. We don’t support critics deliberately misleading the public, regulators and the media. For many months, some critics have mischaracterized the program, our intentions, and perhaps most sadly, ignored the needs of the unconnected. Free Basics is open to all developers and operators. The data proves it serves as a bridge to the full internet in India and 29 other countries. And the program is helping people find jobs, increase knowledge and improve lives.”

This campaign comes about a week after TRAI issued a ‘Consultation Paper on Differential Pricing for Data Services’ on December 9. The paper raises the following questions for comments from the stakeholders:

Question 1: Should the TSPs be allowed to have differential pricing for data usage for accessing different websites, applications or platforms?

Question 2: If differential pricing for data usage is permitted, what measures should be adopted to ensure that the principles of nondiscrimination, transparency, affordable internet access, competition and market entry and innovation are addressed?

Question-4: Is there any other issue that should be considered in the present consultation on differential pricing for data services?

TRAI would be accepting the comments till December 30 and counter-comments by January 7, 2016. This clears the air as to why Facebook is resorting to such desperate measures with this campaign.

Please be aware of what you are getting into; send the mail only if you truly want to support Free Basics in India.