The previous funds helped it stock up for festive sales, in which it recorded 10X growth 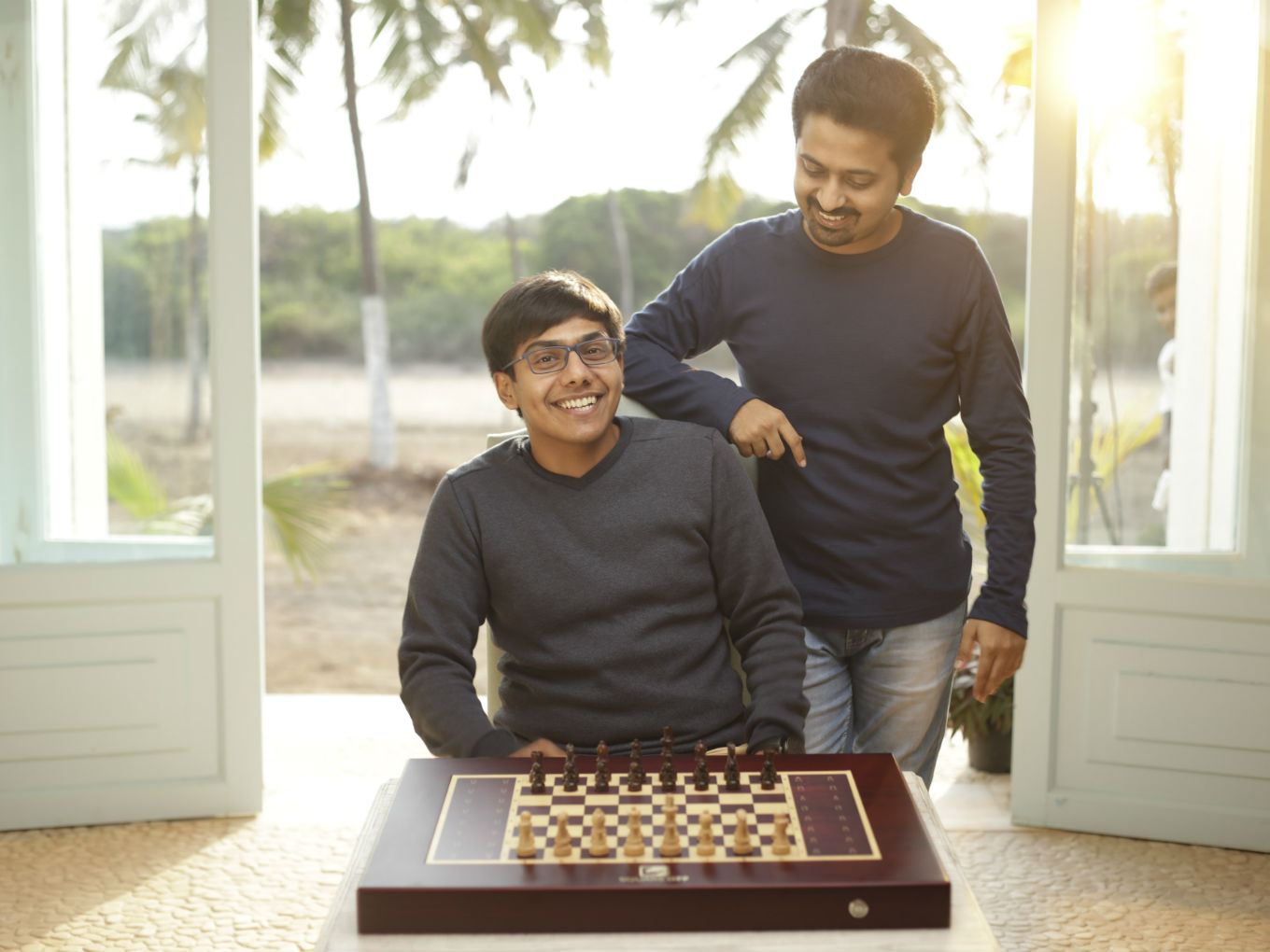 AI-based automated chessboard maker Square Off seems to have earned its inspiration from Harry Potter, the cute, bespectacled young wizard who zips around on his magic stick on the Hogwarts grounds. Square off is bringing a magical version of chess to us muggles, similar to the wizard chess popular at Hogwarts — where the pieces are enchanted to move themselves. Yes, you heard right.

Aatur Mehta and Bhavya Gohil founded Infivention Technologies Pvt Ltd in September 2015 to bring to the world their flagship product — Square Off — an intelligent, connected chessboard powered by AI and controlled through an app where the pieces move on their own (really!).

And the magic seems to have rubbed off for the startup itself. In September this year, Square Off raised $1.1 Mn in a Pre-series A funding round led by Kstart Capital, Gohil told Inc42 in an exclusive interview.

Singapore-based RB investments, angel investor Mayur Desai and existing investor India Quotient also participated in the latest funding round of the Mumbai-headquartered startup, run by its parent company Infivention — Infinite Invention. Its primary markets are the US, Europe, and India.

Prior to this, the startup raised $50K in an angel investment (July 2016) and $500K in seed funding (July 2017) from investors such as Anand Lunia of India Quotient, Pranav Marwah of thinQbate, Samir Somaiya of the Somaiya Group, and Paula Mariwala of Seed Fund.

Square Off utilised these funds in stocking up for its exclusive sales on Amazon in the US and also for the Thanksgiving, Black Friday, and Cyber Monday sales. “The results have been exciting and Infivention has recorded 10X growth in these seasonal sales,” says Gohil.

The startup will use the latest funds to prepare for the Christmas season sales and will also invest in marketing, team building, and research and development of new products.

So, how does Square off work? Users can take on anyone from anywhere in the world, and the opponent doesn’t have to have an actual Square Off board — he/she can just play through the app and the board reflects all the moves in real time. Its training mode allows players to challenge Square Off’s AI across 20 difficulty levels. Not just that, Square Off also enables live streaming of expert matches right on the chessboard.

And here’s the technology behind the magically moving chess pieces: There is a compact two-axis robotic arm with a magnetic head beneath the box (the chessboard) that moves the magnetic chess pieces. The Advanced RISC Machines (ARM) processor with Bluetooth Low Energy ensures smooth communication with a smartphone, taking care of decrypting and execution via the application.

Gohil explained that the most important thing is that the Square Off board is programmed in such a way so that the chess pieces don’t collide during automatic movements.

“It supports over-the-air updates so that we can always keep updating the product with new features. Be it selecting sides (black or white), difficulty levels, opening moves of the computer, challenging friends, analysing games, using the timer, or chatting with the opponent — everything is controlled through the app,” he adds.

And guess who the company counts among its users? None other than Bollywood superstar Aamir Khan! 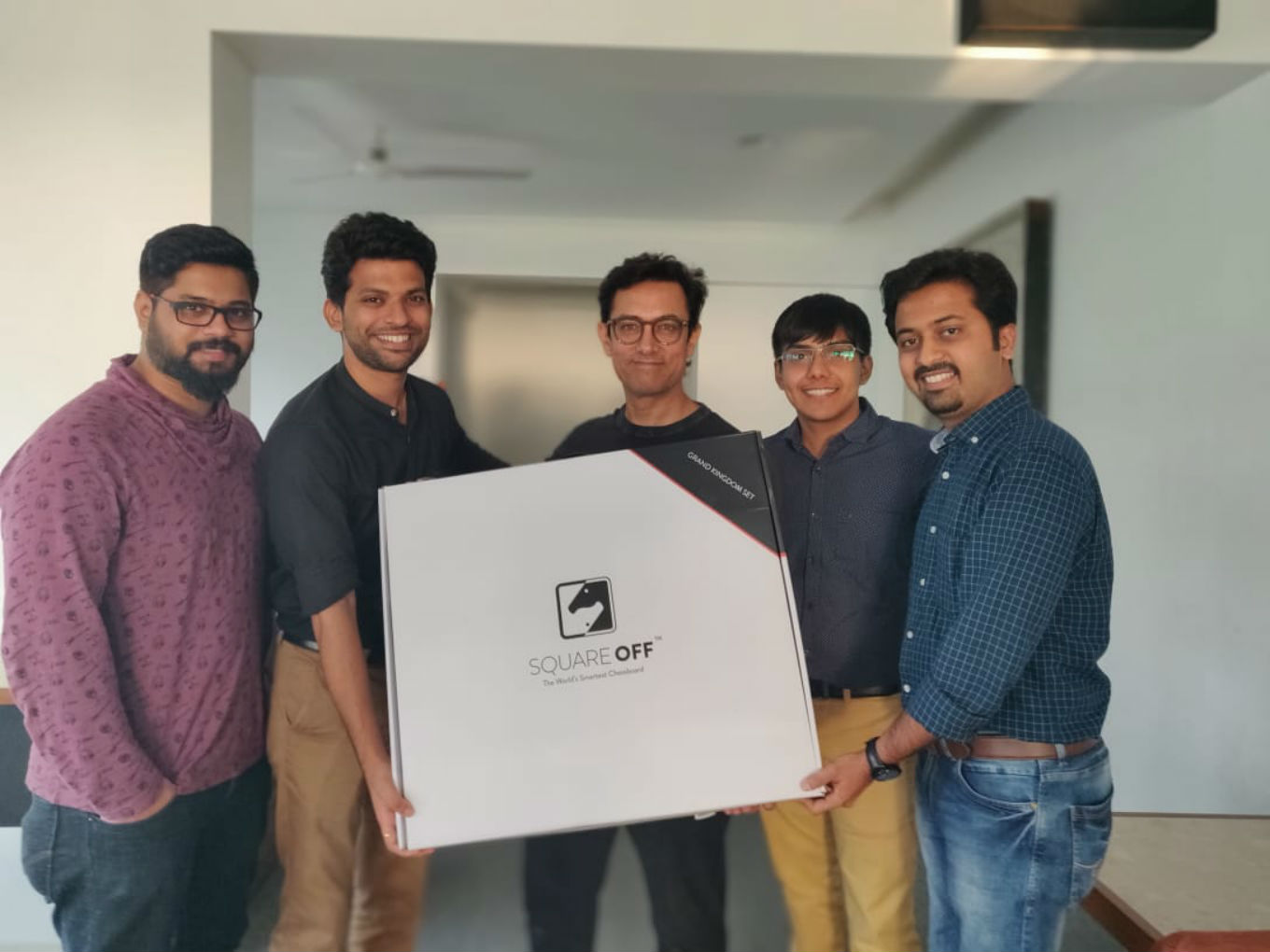 The Opening And The Gambit

Gohil and Mehta struck upon the idea for Infivention — the infinite invention — in 2013 when the chairperson of the National Association of Blind (NAB) asked them to come up with a software that would enable the visually impaired to play chess.

The duo started work on a specially designed chessboard for the visually impaired and tested the feasibility of work.

After delivering the project successfully to NAB, the company set off on a new journey, manufacturing chessboards in China, where they had to overcome challenges such as communication gap and finding vendors who could manufacture their product.

Gohil added they had a tough time raising initial funds for an innovative hardware product as they were trying to create a new category in the market with Square Off.

However, Gohil and Mehta stuck together through the tough times. In November 2016, their persistence finally paid off when they managed to raise 2,000 pre-orders along with a fundraising amount of $535K through a US-based crowdfunding campaign.

At present, Square Off is collecting orders via its website along with Amazon and claims to have recorded over $500K sales in November itself.

The company made its first acquisition with MyChessApps, a chess app company, in January,  soon after which Infivention launched full-time operations in Bengaluru to support research and development of the product.

Boardgames: A Play Worth Millions Of Dollars

Boardgames have been around since the earliest civilisations first arose over 5,000 years ago. Chess, which originated around 600 AD, is one of the few ancient games that’s still played worldwide. Most historians believe that chess originated in India during the Gupta Empire although some say it originated in China.

In its initial form, the Indian game was called chaturanga and featured the four divisions of the military — infantry, cavalry, elephantry, and chariotry. Over time, these game pieces evolved into the modern-day pawn, knight, bishop, and rook, respectively. Monopoly, Snakes & Ladders, Ludo, and Business are some of the relatively newer popular boardgames.

According to research, chess makes for a profitable business. A Ken report entitled ‘Global Chess Industry In-Depth Investigation and Analysis Report 2017’ said that globally, the CAGR of the chess industry was 2.5%; the chess industries of the US, Europe, Japan, and China are reckoned to hold a 43% share of the global market.

The idea of applying technology to modify boardgames and enhance the user experience, of course, is relatively new but is finding many takers.

Much before Wizard Chess made awe-inspiring magic on the chessboard, the first game mastered by a computer was noughts and crosses (also known as tic-tac-toe) in 1952. In 1997, IBM’s Deep Blue computer famously beat Garry Kasparov at chess.

With AI coming into its own, everything it powers is getting smarter and smarter. As analysts said in a research paper entitled ‘AI-based Playtesting of Contemporary Board Games’: “We believe that automated analysis of contemporary board games with automated agents has a lot to offer.”

Well, Infivention’s AI-powered Square Off is offering chess lovers a completely new game, one that quite literally enables them to make magical moves, and may just checkmate chess as we know it.