Elevate 100: Karnataka Govt. Picks 112 Most Innovative Startups To Nurture Them To Success 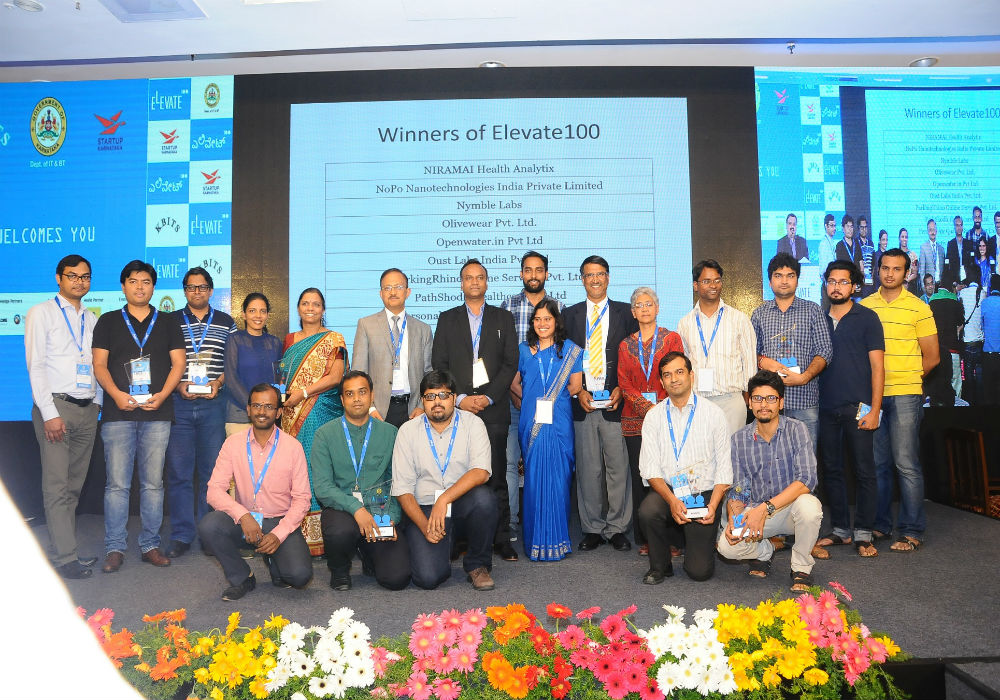 Aimed to trigger the startup ecosystem in the State to the next level, the government of Karnataka has announced the names of 100 startup winners’ list out of 1700 applications it received, during the course of its two-day grand finale of India’s first comprehensive entrepreneurship platform, ELEVATE 100 on 29-30 August, 2017. A brainchild of the State government, the ELEVATE 100 programme is a combined initiative of the Startup Cell, Karnataka Biotechnology and Information Technology Services (KBITS) Government of Karnataka. According to the press release, this initiative would also give the selected 100 startups access to the government’s $62.5Mn cumulative startup fund as well as offer mentoring from industry experts, idea validation, advisory and legal support.

Launching the platform’s two-day jam packed finale sessions, the State’s IT, BT & Tourism Minister Priyank Kharge said, “The efforts of the Karnataka government won’t stop at elevating the chosen 100. We see ELEVATE 100 as a continuing process where the best ideas from the state gets the support and guidance it deserves.”

Congratulations to the brightest innovators of Karnataka. #Elevate100 to fund 35 Cr to the innovators. 1st of its kind initiative in India pic.twitter.com/Qtw4O8cC8q

“Karnataka is home to the world’s fastest-growing startup ecosystem. The government is trying to nurture this ecosystem with strong policies like the IT Policy, Start-up Policy, BT Millennium Policy, ESDM Policy and the KAVGC Policy, giving the ecosystem a strong foundation to help entrepreneurs and established industries to flourish,” Kharge added.

According to Gaurav Gupta, IAS, Principal Secretary Department IT, BT & ST, this was just one of the many initiatives aimed at creating the largest pool of talented entrepreneurs in Karnataka. Sub segments such as AI & Robotics are already being nurtured through various Centres of Excellence. “A harbinger of great things to come, the target is to create 20,000 successful startups by celebrating and supporting them through continuous engagement,” stated Gaurav.

Elevate 100: Creating A Continuous Knowledge Base For Indian Startup Ecosystem

Besides shortlisting the 100 most innovative startups to mentor, fund and extend legal supports, the event witnessed various knowledge sessions pertaining to startup issues, throughout the day. In a chat session with KK Natarajan, Chairman-Mindtree, Bhavish Aggarwal, CEO, Ola Cabs said, “Startups in Karnataka need to move forward, learnings from failures and balance passion with rationality. They need to engage with the community at large. Also, valuation and value creation are two different things. Capital isn’t the end, it is just the beginning of the journey.”

Peter Yorke, CEO, Yorke Communications highlighted the art of moulding traditional marketing techniques and channels to the digital age in a ‘GTM Masterclass.’ “The entire propagation techniques have changed over the years. It is no more about us, it is about them (consumers),” said Yorke, while decoding the marketing strategies for startups.

Startups’ potential varies in accordance with their scalability of ideas. Anjana Vivek, Founder-Director, VentureBean Consulting detailed the science of startup valuation, with nuggets on best practices, models and real-world examples of good and bad valuations.

Ravi Narayananan,  Global Director, Microsoft spoke at length about problem solving, focus & peer mentoring. He said, “Bangalore has the 3rd largest start-up ecosystem in the world. This is a momentous time for Karnataka with so much to look forward to, thanks to this initiative by the Government.”

During the two-day conference, the State government also signed eight significant MoUs to cater to the needs of the identified 100 startups.