Indian companies are rushing into the Lithium-ion battery production business Last week, a California state patrol vehicle spotted a grey Tesla S going at 70 mph (113 kmph) down Highway 101 to Palo Alto in the wee hours of the morning. Suspecting that the driver was unconscious, the officers put on their sirens and started trailing the car. When the car kept going, the officers figured the Tesla was on autopilot. They then did something smart — they moved ahead of the car and gradually started braking. The Tesla too slowed down until it was stopped in its lane.

The driver, Alexander Joseph Samek, a local Los Altos politician, woke up only after the police knocked on his window. He was arrested and charged for driving under the influence.

The chase, which went on for 7 miles, has become a matter of intense debate between transportation analysts and Tesla users and experts.

The puzzling thing is that Tesla’s autopilot feature requires a driver to touch the steering wheel every minute, or the system alerts the driver and brings the car to a stop. It seems that in this case, this feature did not work or the driver somehow subverted it, experts say.

While Tesla is yet to release an official statement on what happened, on Sunday night, CEO Elon Musk tweeted:

He also said that while the autopilot can’t recognise emergency vehicles currently, it would be able to do so in the future.

While Musk resolves Tesla’s autopilot issues, let’s take a look at Electric Vehicle (EV) developments in India and around the world this week.

Korean carmaker Kia Motors, which is readying for its launch in India next year, is also planning an India-specific electric vehicle as part of its line-up. According to a media report, work on the car is underway in Korea.

This is the first time that a multinational carmaker is developing an EV specifically for the Indian market. Several other automakers have developed EVs but for the global audience.

The heavy industries ministry has proposed reducing of customs duty on parts of EVs that are currently not exempted from import tariffs.

The new set of tax cuts was proposed to the finance ministry in a meeting last week and are likely to be introduced along with the $776 Mn (INR 5,500 Cr) Faster Adoption and Manufacturing of (Hybrid and) Electric Vehicles (FAME) India scheme.

Over 12 companies ranging from auto component manufacturers to power and energy solutions providers have reportedly rolled out their plans to make lithium-ion batteries locally to cash in on the wave for green vehicles in the country. Some of these companies are: Amaron, Exide, Exicom, Greenfuel Energy Solutions, Trontek, Coslight India, Napino Auto & Electronics, and Amara Raja Batteries.

In a country with a negligible number of EVs, why are companies rushing to make EV batteries?

According to industry experts, the potential for lithium-ion batteries is going to be huge in the future. One media report said even if sales of EVs for personal use remain slow, batteries will soon be required for running electric cabs and busses.

The Los Angeles (LA) Auto Show 2018 has made it clear that EVs are the future of the auto industry. From electric bikes to cars and SUVs, the industry is about to release dozens of battery-run vehicles in the coming year. In fact, reports suggest that by 2020 there will be more than 100 EV launches across the world.

But while automakers are not holding back from going electric, everyone’s worried about one thing — will there be enough buyers to justify the investments in EVs?

Sales have been growing in 2018 with Tesla struggling to keep up with the demand for its Model 3, but still, EVs account for less than 6% of total car sales globally. However, according to industry watcher Boston Consulting Group, the global EV market will grow dramatically by 2030 to occupy a 48% market share. 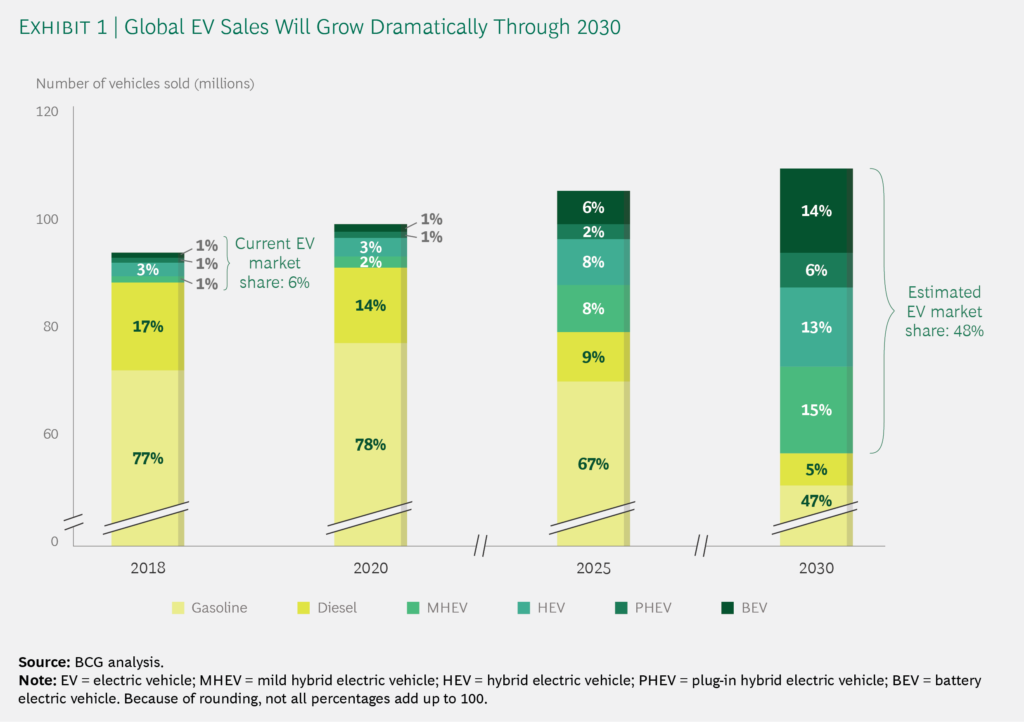 The subsidies, in the form of tax credits, are capped by the government at 200,000 vehicles per manufacturer, after which the company can no longer avail it. General Motors (GM) has said it expects to hit the threshold by the end of 2018, while Tesla said in July that it had hit the threshold.

US President Donald Trump last week threatened to eliminate subsidies for GM in a series of tweets.

A Question Of When

Before the invention of the internal combustion engine (ICE), the steam engine was the only mechanised way to travel. However due to its bulk and complexity it was only useful for communal travel.

The ICE not only changed the way we travel but because of its ease of use, it changed how we fundamentally thought of the world. People enjoyed not only the sense of freedom that it bought but also for the thrill of ‘speed’. Because of ICE engines humans were finally the fastest species on Earth!

The 2018 LA Auto show has shown in no uncertain terms that EVs are now part of the mainstream auto business. Automakers are forming global alliances to develop EV platforms, oil companies are getting into charging infrastructure, and governments working on the regulatory framework around the ecosystem.

This year the discussion around electric vehicles as the future went from a question of “If?” to “When?”