Drone Regulations 2.0 May Accommodate Delivery For Food And Goods Too, Hints Sinha

Drone Regulations 2.0 May Accommodate Delivery For Food And Goods Too, Hints Sinha

Registration is mandatory for the pilot and the owner, along with the drones

Globally, the drone driven market will be more than $10 Bn, says research

Come December 1, it would be interesting to watch drones hover the skies across India. The Ministry of Civil Aviation (MoCA) recently legalised flying commercial drones, and also announced a policy called Drone Regulations 1.0. However, the Drone Regulations 1.0 banned the use of drones for delivery of goods and food.

In a further update, it appears that the MoCA might green signal the use of drones for ecommerce purposes as well.  MoCA posted several tweets quoting the minister of state  Jayant Sinha. One of it reads —

Here, it is worth noting that Sinha leads the task force on drones that is supposed to file the draft Drone Regulations 2.0.

The regulation 1.0 is a stepping stone to promote drone-based surveys and projects, surveillance, videography, aimed at enhancing ecommerce delivery, logistics across sectors.

Drone Regulation 1.0 mandates pilot, the drone owner to register themselves along with their specific drones, or else it won’t take-off.

The regulation is a complete digital guidelines in which people can register (through a mobile-based app), and operate drones within the permitted zones — Red Zone (restricts flying drones), Yellow zone (requires permission), and Green zone (no permission required).

The Director General of Civil Aviation (DGCA), under MoCA, is in a process to set up a digital sky platform that will regulate its flight in Indian territory, and will also recognise unregistered drones flying in the sky. Also, as per the Regulation 1.0, the pilot is allowed to fly drones within visual line-of-sight, and at daytime-only, to a maximum altitude of 400 feet. The altitude parameter is in-line with the regulation in countries such as the US. 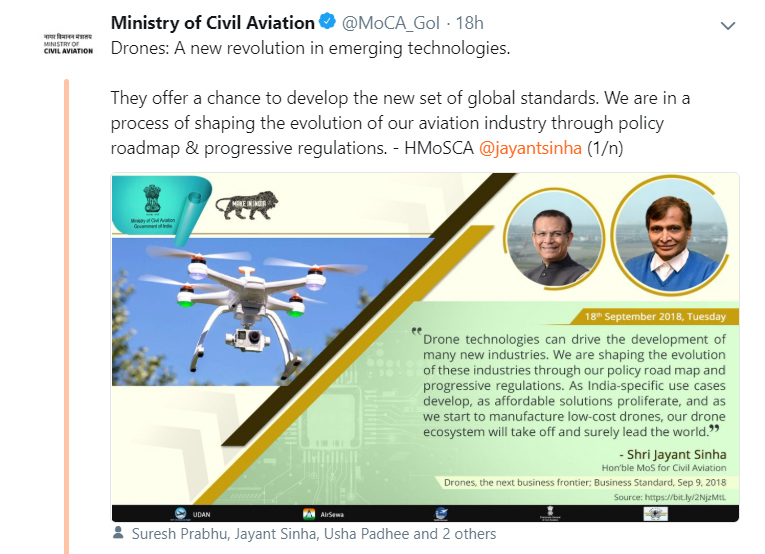 Research report estimate that the drone-driven market globally will soon be more than $10 Bn. In India, various experts estimate that market opportunity could soon exceed hundreds of billions of rupees, MoS tweets.