The currency in circulation across the country increased at a CAGR of 10.2% over the past 5 years

With the entry of fintech and big techs in BFSI, banks are embracing technological innovation at a faster pace

The banking and financial services industry in India has seen a paradigm shift since the inception of NPCI in 2009. The wave of change started by the introduction of early digital payments instruments like credit cards, debit cards, RTGS and IMPS, has reached its pinnacle in the last three years, after the November 2016 demonetisation event. The extent of digital penetration can be gauged from the fact that each day on an average, the payment systems in India process more than 10 Cr transactions of nearly INR 6 Lakh Cr, according to Shaktikanta Das, Reserve Bank of India governor.

Anand Kumar Bajaj, MD & CEO, PayNearby said, “India has become a poster boy for the world when it comes to financial access to all. We are sure in addition to being a Krishi Pradhan Desh, India will soon be recognised as a Digital Pradhan nation too.”

It’s Slow, But The Shift Is Happening 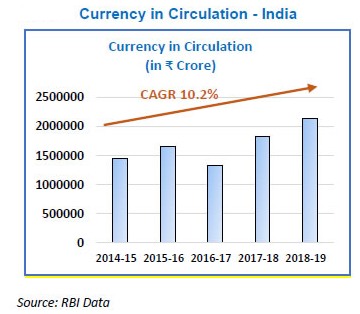 Further, except China and India, the other relevant nations have shown an increase in cash circulation. Reduction in low denomination currency is indicative of the fact that small value transactions are indeed moving to digital, mentioned Bajaj.

“The rate of increase is lower indicating a perceptible shift away from cash. Although cash is deeply embedded in the payment systems in India, planned efforts post-demonetisation have shown a marked shift from cash to digital payments,” said RBI’s report.

As highlighted by Das, banks are now embracing technological innovation at a fast pace,  ranging from investing in fintech companies and launching their own fintech subsidiaries to collaborating with fintech companies.

Also, with the entry of fintech startups in segments such as payments and remittance, crowd-funding, trade finance, insurance, account aggregation, wealth management and more, several banks are applying a hybrid model in collaboration with fintech players where mobile services interact with banking services.

“This “best of both worlds” approach has resulted in tremendous growth in the number of digital payments, which is expected to continue,” he added.

A Move Towards The New Era Of Banking

In his speech, Das focussed on the fact that banks today are facing competition from fintech companies as well as big tech companies such as Google, WhatsApp, Amazon, PayPal, Flipkart, Ola, Uber among others. Local and global players, investors and government stakeholders are fighting hard to get a pie in the booming fintech ecosystem of India.

Uber recently announced the formation of the Uber Money team of more than 100 technology professionals in India. WhatsApp Pay received its NPCI licence. Swiss bank UBS is considering launching a venture fund to invest in fintech startups. And NPCI has even launched “UPI Chalega” campaign to increase user engagement and mobile payments adoption.

The crux is that rapid innovations and adoption of new-age technologies are not only putting pressure on banks and banking regulators but everyone else connected to the ecosystem, willing to be a part of this growth. While cut-throat competition is inevitable, Das believes this is for the better.

“As the Indian banking sector is propelled forward to a higher orbit, banks would have to strive hard to remain relevant in the changing economic environment by reworking their business strategies, designing products with the customer in mind and focusing on improving the efficiency of their services,” said Das.

Announcing The D2C Day 2.0: A Crash Course To Help D2C Brands Scale Up

Blockchain This Week: As Winter Session Of Parliament Looms, Crypto Industry On ...