Jaitley Has Hinted At Plans To Increase Digital Intensity In Education, An Open Opportunity For Edtech Startups 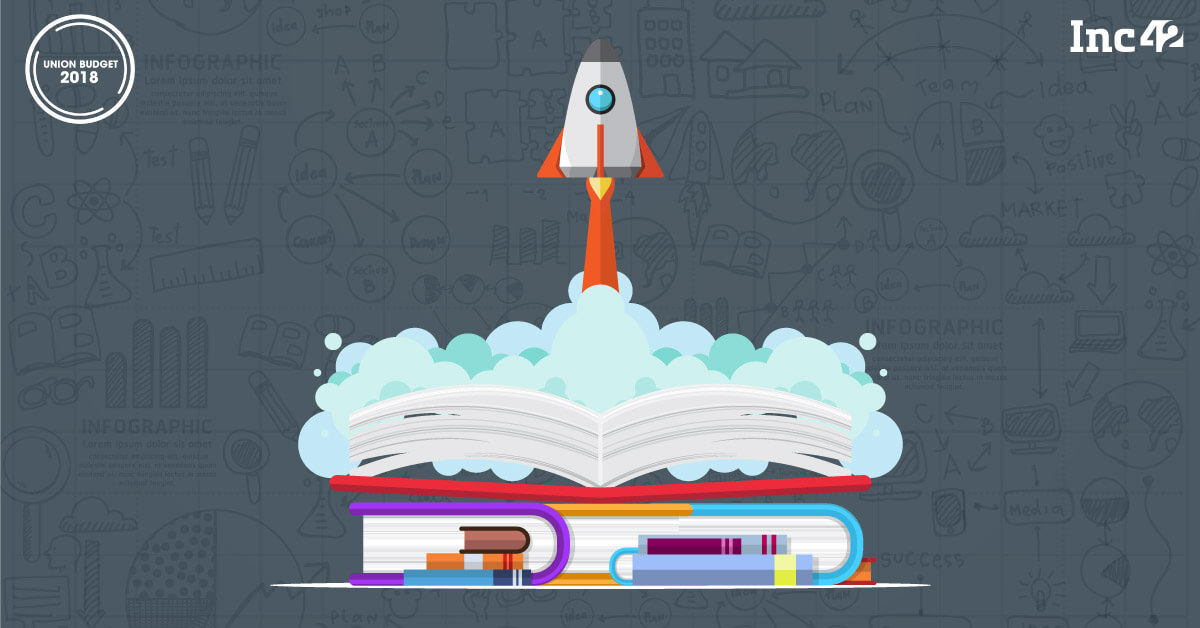 With a focus on segments such as skill training, research and increased focus towards a digital economy, Finance Minister Arun Jaitley’s Union Budget 2018 has come up with loads of hopes and opportunities for the edtech startups community in India.

The government has repeatedly iterated its support to improve the education sector in the previous budgets, exploring domains like skill training, e-learning as well as services such as SANKALP, STRIVE and SWAYAM. With the latest budget 2018, the government has moved a step forward. As stated by Jaitley during the speech, the government is aiming to increase digital intensity in education and “will gradually move from Blackboard to digital board”. He also stated that the quality of education is a cause of serious concern and only with the help of technology we can make some progress in this regard.

However, Ali Asgar Kagzi, Co-founder and Director, Genext Students believes that a much faster & easier solution could be to do PPP partnerships with existing players already trying to improve the quality of education, faster disbursement of the already allocated funds and reducing the tax burden for the ecosystem to get a boost.

Additionally, he has suggested incorporating a national apprenticeship scheme to offer training to 5 Mn youth by 2020 and a proposal to set up 306 Pradhan Mantri Kaushal Kendras for imparting skill training.

The edtech startup community has welcomed Jaitley’s efforts in boosting the Indian education system.  As Byju Raveendran, Founder & CEO, BYJU’S shared, “The decision to move from blackboards to digital boards will change the way teachers teach and students learn and make learning an immersive and interactive experience. The right use of investment in the Indian education sector will provide an impetus to create an environment where learning is seamless for students irrespective of their learning proficiencies or geographical locations.” 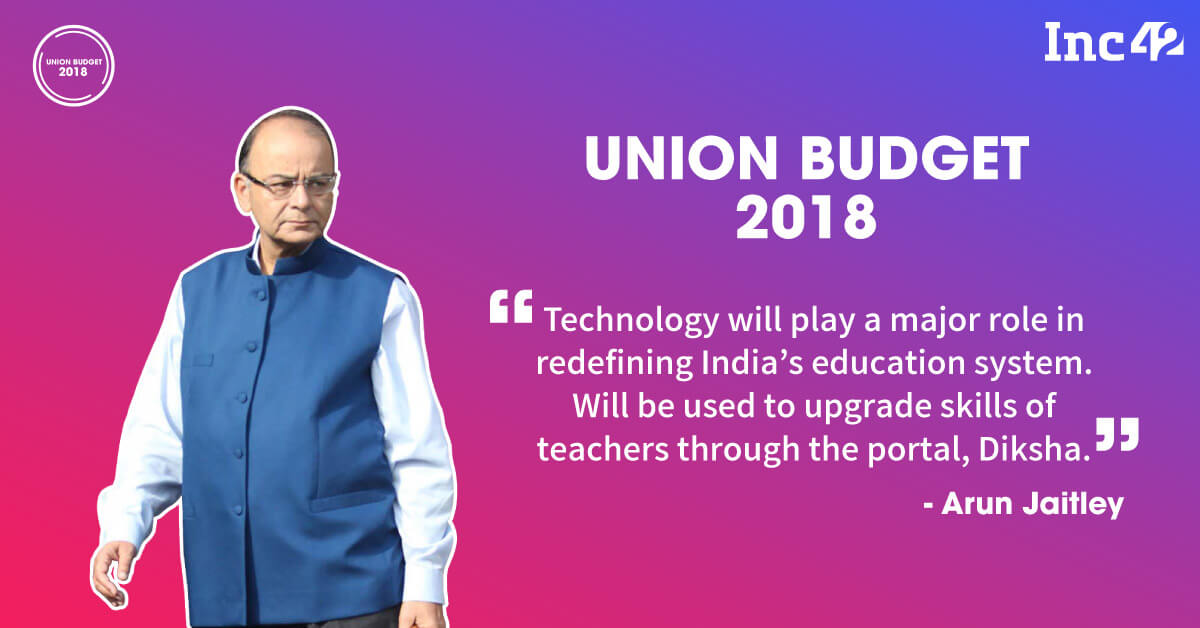 Supporting the technology focus of budget 2018, Zishaan Hayath, CEO, and co-founder, Toppr.com shared in an interaction with Inc42, “Capitalising on digital influence for quality education is a welcome move. We sincerely believe that technology has a very important role in education and we are glad that the government aligns with it.”

He further added that education is critical to the future of India and any relaxations in taxes on education and technology would have been an added benefit. “Recognising the importance of teacher training is another significant step to boost quality education in the country. We eagerly await the details and plan of action from the government following the announcements.”

Arun Rajamani, Country GM of Pluralsight India, a technology learning platform shared similar sentiments with Zishaan. As he stated, “India has been slower to adopt technology in learning than other countries. We have observed that technology-led learning is highly effective in closing the skills gap. It is encouraging to see that the FM has announced an initiative to digitise teaching methods in India.”

Other Key Measures Introduced For Edtech In Union Budget 2018

So, Is The Budget 2018 Aligned With Expectations Of The Edtech Startups?

In our earlier Pre-budget expectation series for the edtech startups, we shared a number of developments that the Indian edtech startup community was expecting from the Budget 2018.

One of the most crucial measures was the infusion of more funds into the edtech sector. Though the government’s Startup fund initiative looked ambitious, the approved funds have been disheartening. Of the target amount of $1.57 Bn, only $94.2 Mn has been released to SIDBI.

As per Inc42 Datalabs, so far in January, only five (disclosed) deals had happened in the Indian edtech segment amounting to just $5.7 Mn. Also, in the last three years, investments have been increased in the edtech domain.

However, in comparison to fundings in other segments such as ecommerce, enterprise and more, edtech still ranks last among the top 5 sectors.

This is an ongoing challenge for the edtech startups in India and some measure was expected from Jaitley in Union budget 2018.

In the current budget, although Jaitley did not allocate any specific fund to the edtech startups, he announced to take “measures to strengthen the environment for the growth of venture capital funds, angel investors in the country”.

Also, with the government giving impetus to the adoption of technology for creating a robust education system in the country, going ahead, we expect that the investors will be pushed to acknowledge the increasing momentum of the edtech startups in the country.

Another demand from the edtech sector was the improvement of digital infrastructure And the current budget 2018 by Jaitley looks extremely promising in this regard.

Beas Dev Ralhan, the founder, and CEO of Next Education seems highly optimistic about this budget. As he stated, “Yes, our expectations have been fulfilled to a great extent. The amount of $15.6 Bn (INR 1 Lakh Cr) has been earmarked in the budget for a new scheme called Revitalising Infrastructure in School Education (RISE), and I see a handsome amount being allocated to digital education. This will definitely give a boost to the edtech sector.”

So it is very critical to get students future ready by inculcating the use of technology at the school level. “This will allow us to provide more flexibility and personalization to the individual students learning ability, learning style, and pace,” he added.

With real-time assessments, we can help teachers identify how each child learns, where he needs improvement and which learning strategies suit him best.

“This creates enormous opportunities to personalise each student’s coursework, to match her learning style, fill skills gaps and even help her enjoy school more.  We must have a blueprint in place to guide schools in the adoption of technology to ensure that they adopt technology and use it in a transformative manner,” he added.

However,  Karthik K S, founder, and CEO of AEON Learning believes that the education sector could further be strengthened if there is an increased focus on increasing the quality of education rather than creating infrastructure for education. “The focus should be directed towards building an administrative body, which is able to see and drive technology and quality in education,” he added.

This was another area of online skilling startups in the edtech segment that was trying to gain Jaitley’s attention to. In the Union budget 2018, the government’s take on inducing skill training programmes for teachers as well as Indian youth is a welcoming step for the edtech community.

As Karthik said, “Another key focus of the Budget 2018 was on improving the quality of teachers, who are the backbone of quality education. We look forward to further support from the government towards private edtech players, who would use technology to reach quality education from a few to quality teachers to a larger and remote student base.”

These initiatives will also propel the Indian youth to focus on skill training. At the same time, the continuous push towards making India a digital nation will further open doors of opportunities for the online skilling startups.

Ashish Aggarwal, CMD, ThinkSkills Consulting further emphasised that setting up additional 306 Kaushal Kendras and to set up a target of training 5 Mn youth by 2020 shows the intent of this government towards promotion skill development at the grass-root level.

“Moreover, the government has also realised the importance of improving the quality of teachers to enhance the quality of education in our country. Thus, under the Right to Education (RTE) Act, lakhs of untrained teachers will receive training to use technology in classrooms, and this will eventually pave the way for a transition from blackboards to digital boards in schools. This too will lend a boost to digital education in India,” added Beas.

However, Ravi Sreedharan, Co-founder, ISDM, believes that the budget pitch of technology and infrastructure as a ‘game changer’ for the quality of school education is a very predictable move by the government. ” In essence, this is a hypothesis that would demand rigorous implementation of education delivery mechanisms based on a holistic approach to teaching and learning experiences both for service providers and students. The budget fails to identify a strategic targeted approach to tackle skill competencies and professional growth of educators for quality improvement in learning outcomes,” he added.

With a population of 1.3 Bn+ and a 50% youth population with an average age below 25 years, India is on the cusp of facing a dreadful job creation challenge. So far, the traditional education system, lethargic education policies, and slow technology adoption have made it difficult for the country’s government to provide quality education right in the beginning years.

However, this does not mean that India is void of any opportunity in the segment. A report by Google and KPMG pegs the Indian edtech space to grow from $ 0.25 Bn to $1.96 Bn and online education to witness 8x growth over the next five years. The re-skilling and online certifications category are expected to rule the sector with its current worth of $93 Mn. With the government now understanding the importance of technology and an increased push towards skill education, the vision of ‘A New India’ seems to be on its road to fulfillment.

In addition to the measures announced in this Union Budget 2018, had the Finance Minister Arun Jaitley thought of filling the pockets of edtech startups particularly, it could have been a major boost to the current trend of education in India.

As per Inc42 Datalabs, the low funding in edtech domain is mainly due to lack of reach in the semi-urban, rural and remote areas. Unlike the Tier I folks, who are well acquainted with modern technologies like e-learning, etc. the rest of India is still largely reliant on tuitions and private educations.

Overall, the Union Budget 2018 can be said to have moved in a positive direction for edtech startups. As Ashwin Damera, Executive Director, Emeritus Institute of Management said, “The announcements in the Union Budget 2018 that technology will be the biggest driver in improving quality of education is a welcome one and, we believe, will provide an impetus to edtech players to partner the Government in its endeavor.”

At some junctions, the government has taken effective measures directly and at some, an array of opportunities have been created to fulfill the dreams of the edtech startups. But, still, a lot has to be done. As Ishan Singh, MD and founder, RevStart and Active Angel Investor aptly sum up,

“Overall, the budget 2018 showcases moves in the right direction but hasn’t brought in any drastic measures to help the Indian Startup Ecosystem. The efficient execution of these policies should be the difference-maker in the years ahead.”