Digital Rajasthan Yatra II Is A True Insight Into Rajasthan Being At The Cusp Of A Digital Revolution: CM Vasundhara Raje

Digital Rajasthan Yatra II Is A True Insight Into Rajasthan Being At The Cusp Of A Digital Revolution: CM Vasundhara Raje 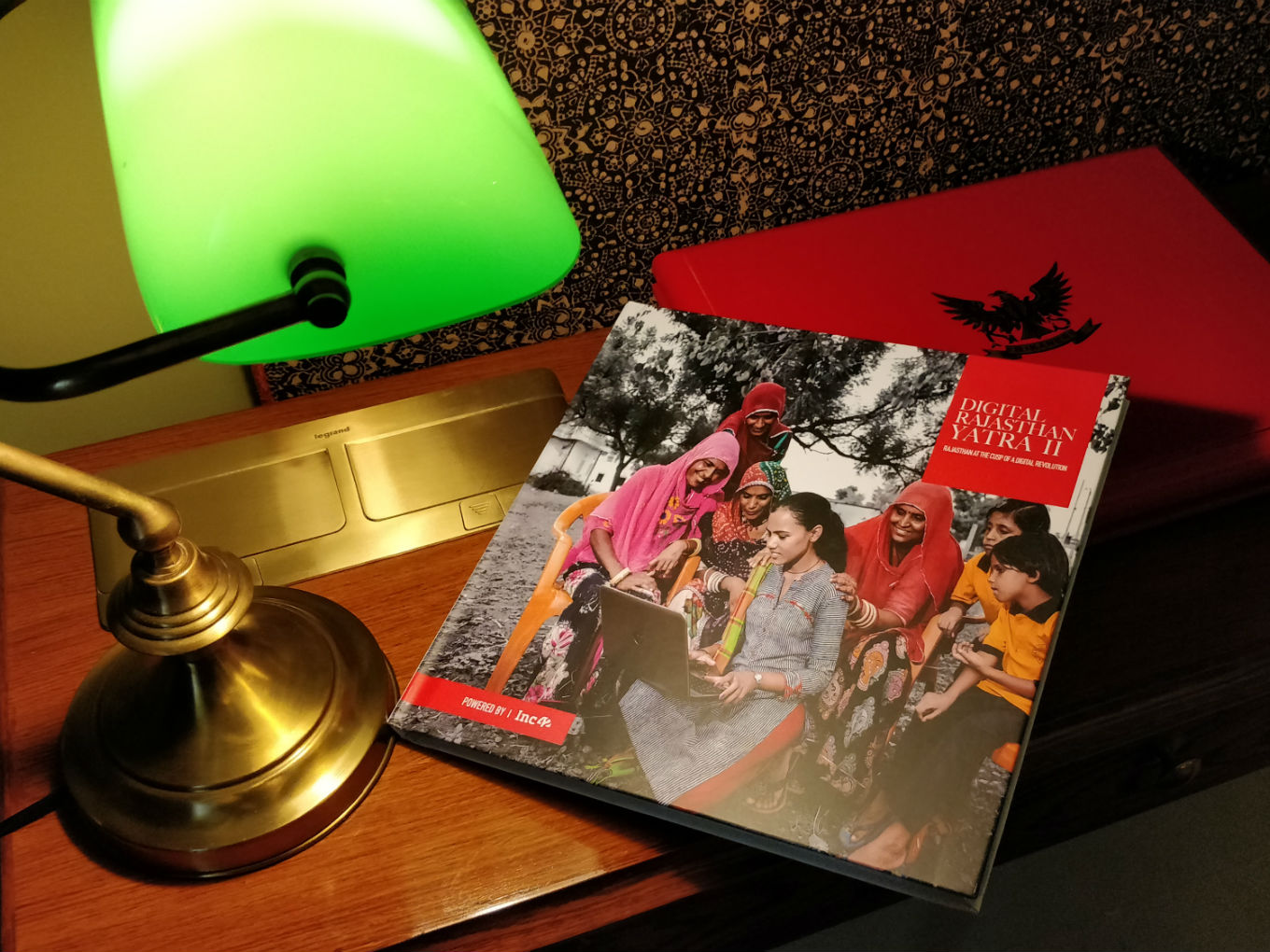 July 27, 2018, is a date that will be remembered for long by Inc42. It was Day 3 of Rajasthan Digifest in Bikaner. It was also the day that Team Inc42’s work of passion — the second edition of Digital Rajasthan Yatra Report — was unveiled by the Honourable Chief Minister of Rajasthan Vasundhara Raje at the Digifest.

The report is the culmination of Team Inc42’s 10-day long travel across the desert-turned-Digisthan covering thousands of miles to capture the essence of ‘Rajasthan at the Cusp of a Digital Revolution.’

The Digital Rajasthan Yatra II report sheds light on how the lives of women, youth, farmers, and others have changed for the better and how sectors such as small businesses, healthcare, education, and agriculture have been impacted by the wave of technology and eGovernance initiatives of Government transforming the state.

For the second time this year, Inc42 took the initiative of travelling through the length and breadth of Rajasthan to witness Digisthan in the making and its impact. The 10-day Digital Rajasthan Yatra saw Team Inc42 undertake a road trip of sorts across Rajasthan’s dry yet well-maintained roads to touch 10 important cities and districts — Jaipur, Jodhpur, Alwar, Dausa, Udaipur, Nagaur, Rajsamand, Pali, Jhunjhunu, and Bharatpur.

We chronicled the journey and the stories in this Live Blog.

The aim was to discover and actively seek out stories of real change happening on the ground, led by the digital drive undertaken by the Rajasthan government. Team Inc42 had set out to cover 2,000 km but was so swept up in the digital wave that it ended up travelling 3,300 km. We wanted to dig deeper, follow every lead they got on how technology is changing the lives of women, farmers and the youth, and the face of SMEs, healthcare, and education — important pillars of growth for an economy.

And we were not disappointed. Everywhere we halted, talking to city dwellers and village residents alike, observing their interaction with technology, we came across real-life stories of how the state government’s digital initiatives are changing the everyday lives of ordinary people, leading to extraordinary results. 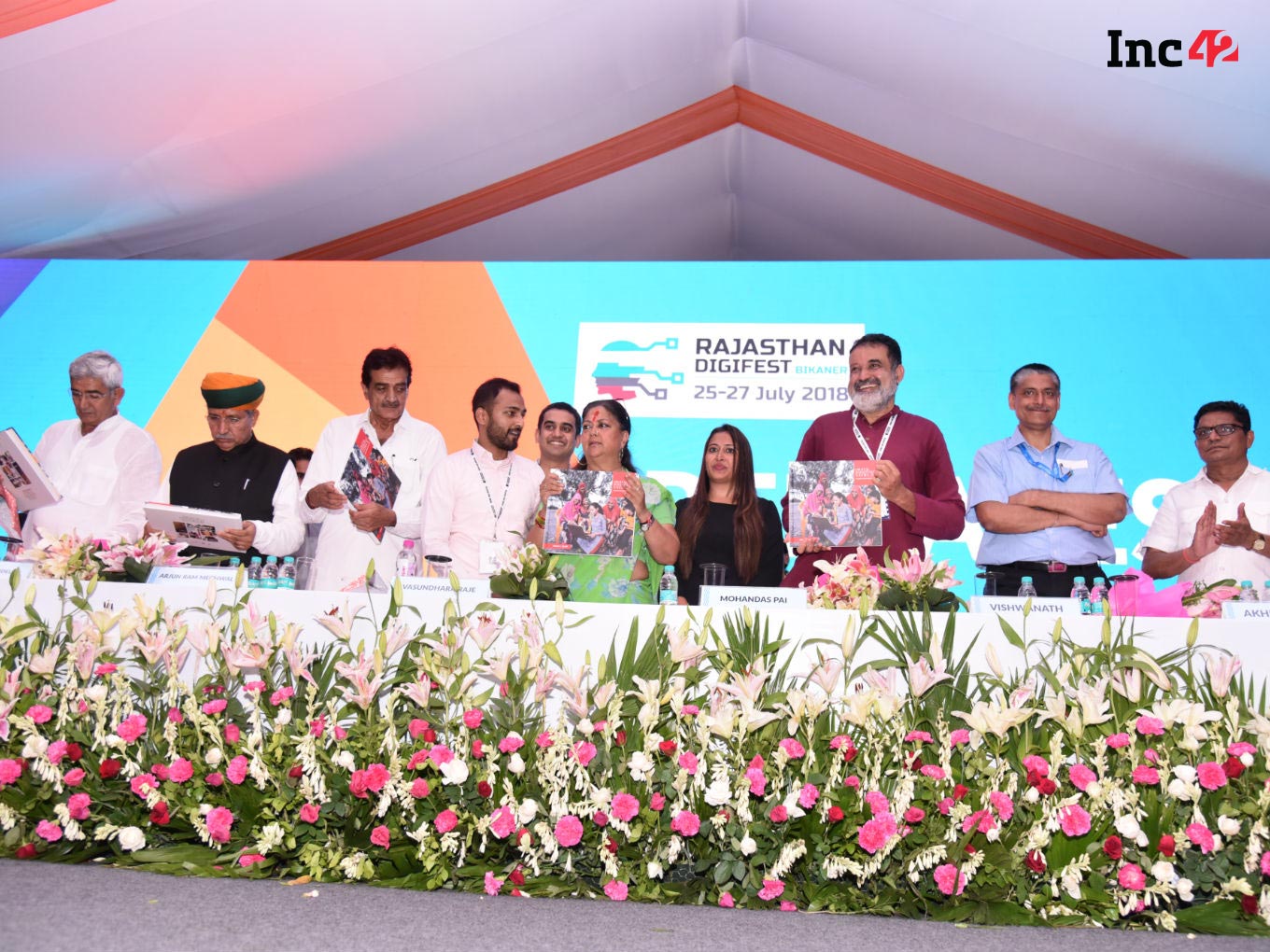 Team Inc42 found that Rajasthan’s digital mission has moved to the next level. Smartphones, the Internet, and “digital” have become a part of the daily lexicon of the people and are helping them lead better lives. Here are some of the stories of change:

T V Mohandas Pai, chairman, Aarin Capital Partners, says, “After reading these stories of how initiatives undertaken by the Rajasthan government, under the leadership of Honourable Chief Minister Vasundhara Raje, are benefiting the people of the state, I am hopeful that Rajasthan will break all barriers on its way to becoming a digital unicorn of India. All indications say that a resounding success awaits the state government, as it creates a digital ecosystem that intends to include all.”

Rajasthan, a state with a population of close to 69 Mn (6.89 cr), is one of the leading agents of digital change in India. It is taking incredible strides towards digital transformation across sectors and cross-sections of society.

The pace at which the Rajasthan government, led by Honourable Chief Minister Vasundhara Raje and Department of IT&C Principal Secretary Akhil Arora, is going digital is truly exemplary – and we won’t be surprised if DigiSthan soon becomes the torchbearer of Digital India as well.