Campus Fund, investing in Student-Led Startups along with AWS launched the Grand Challenge 2020, to nurture and recognise student entrepreneurs across India

While agritech startup qZense Labs won the challenge, startups such as WorkDuck and Sandbird stood out for the jury comprising Swiggy cofounder Sriharsha Majety, redBus founder Phanindra Sama and others 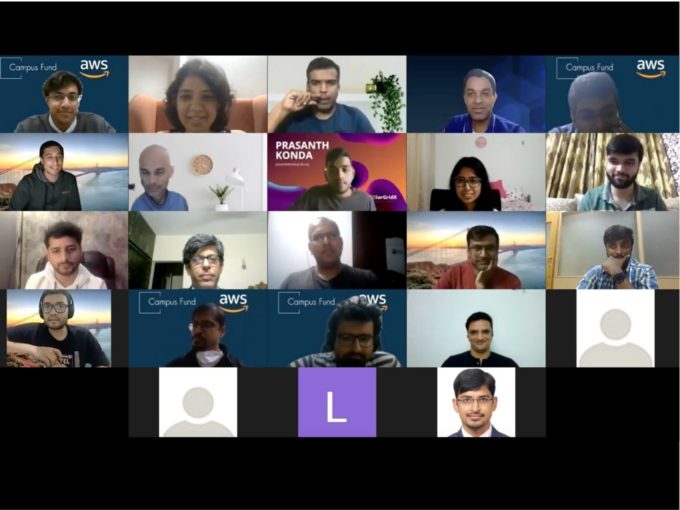 Globally, startups that undergo incubation at university entrepreneurship programmes and college incubators are said to be more likely to succeed, create jobs, and generate more sales, according to one study. In India too, most of the leading colleges offer incubation support to student entrepreneurs through independent cells and divisions in India, and students from the top 10 colleges have gone on to found 4,900 startups.

So supporting and nurturing entrepreneurial ambitions at a college level is a proven method to drive innovation in the economy. However, when it comes to financial support mechanisms and connected ecosystems, student entrepreneurship is one of the most overlooked areas, as colleges face many constraints, with only a handful of incubators able to offer the right support systems.

In an attempt to bridge this gap and nurture student entrepreneurship in India, Campus Fund – India’s only ‘Dorm Room Fund’ and Amazon Web Services (AWS) announced the First Edition of Grand Challenge earlier this year. The Grand Challenge is unique in the sense that no pan-India competition has chosen to focus on student-led startups. Grand Challenge, aligning with the vision of Startup India and propagating the New Education Policy (NEP) 2020, aims at promoting student-led innovations.

The challenge, which concluded on December 10, 2020, witnessed 179 applications from student entrepreneurs, who went through four stages of evaluation leading up to the demo day where 10 finalists pitched.

The 3 winning startups received AWS credits worth $10K and a fast track to the investment committee meeting of Campus Fund for equity investments.

Breaking down the analytics, the event saw 23 startups coming from Delhi NCR, 21 from Karnataka, 16 from Maharashtra and few entries from states such as — Kerala and Goa. In terms of educational institutions, IIT was the frontrunner with the highest number of startups participating i.e. 11, while, BITS Pilani took the second slot with close second with 10 startups participating from the institution.

Among the 123 shortlisted startups, 111 had male founders whereas 12 had women founders. According to AWS and Campus Fund, the women-founded startups were from sectors such as edtech (6), agritech & cleantech (3), and mobility & autotech sector (2). The detailed analytics report can be referred for in-depth analysis.

The participants in the Grand Challenge 2020 went through four rounds of elimination and were analysed at each stage on the following six parameters:

Before the finale, the top 25 startups also received mentorship from industry experts such as Amitabh Nagpal from AWS, SIDBI Venture Capital’s Aditya Jadhav, Zenga TV’s Shabir Momin, Ankit Macchar and Monica Mehta from Wadhwani Foundation, Shanta Gandhi from RBL Bank, Siddharth Choudhary from Invest India, Prashant Mahagaonkar from CitiusTech and Arup Rakshit from HDFC Bank. After the qualifying rounds and based on the mentor feedback and suggestions, finally, 10 startups made it to the demo day for the final pitch.

Among the participating startups are Sand Bird by Bala Surya S. and Ajith Kannan from KCG College of Technology. The Chennai based startup works in agritech and provides cheap and affordable agricultural solutions to the low and middle income farmers. Prashant Mahagaonkar from Citius Tech, mentoring the team said, Sand Bird looked to be a good idea and it was “worth taking to the next stage.”

In an attempt to make solar panel investing accessible and affordable to individuals,the startup SolarGridX by Hardik Bhatia, Devansh Shah and Prasanth Konda from BITS Pilani was also one of the finalists and was provided mentorship by Arup Rakshit from HDFC Bank.

In the enterprise tech, Neuralastic – Hazlo, also impressed the judges to make it to the finals. Co-Founded by Ojas Shukla from Nanyang Tech University, Kartikey Pandey from BITS Pilani and Tushar Mehrotra from Univ. of California, the startup tries to improve access to AI/ML for mid-sized firms and startups at affordable prices by providing a service platform to decentralise smart technologies to help them solve problems. The startup was provided mentorship by Prashant Mahagaonkar of Citius Tech. Speaking about the team and the startup, Mahagaonkar said, “Passionate individuals who were living the startup dream and their choice of target market looked to be perfect for problem-solving.”

Phanindra Sama, the founder of redBus and fellow member of the jury, said, “I couldn’t believe these are all student startups. They are no different from the startups started by experienced professionals. If at all there’s any difference, it’s that they were bolder in their goals than non-college startups.”

The Winners And The Road Ahead

Eventually, agritech startup qZense Labs was declared as the winner of the Grand Challenge 2020. The Bengaluru based startup offers end-to-end IoT solutions for fresh food management which completely digitises the process of inventory keeping and scanning fresh food to check for quality. The winning startup was founded by a team of female  founders, Dr. Srishti Batra, whose win would surely encourage more female participants in future competitions.

The first runner-up was Workduck, an AI-powered app testing platform that can handle all mobile QA testing automatically across devices. The startup is founded by Rishank Pandey, a student of BITS Pilani, and Mihir Katiyar from IIT Kharagpur. Swiggy’s Majety was impressed by Workduck’s pitch. He said, “They’re solving a real pain point and the team seems well primed for capitalising on the opportunity.”

Bengaluru based Digantara emerged as the second runner-up. The startup claims to be the first Indian private company with a mission to secure long-term spaceflight safety by developing space debris tracking and monitoring services.

With the completion of this year’s competition, Campus Fund and AWS are looking to make this an annual affair. Seeing as student startups is one of the most under-funded categories in the startup ecosystem, there is a very real opportunity to unearth some interesting models and innovations, which the two companies are looking to tap. It not only shores up the future of the Indian entrepreneurial ecosystem but also helps make startups an attractive and achievable success path for students.