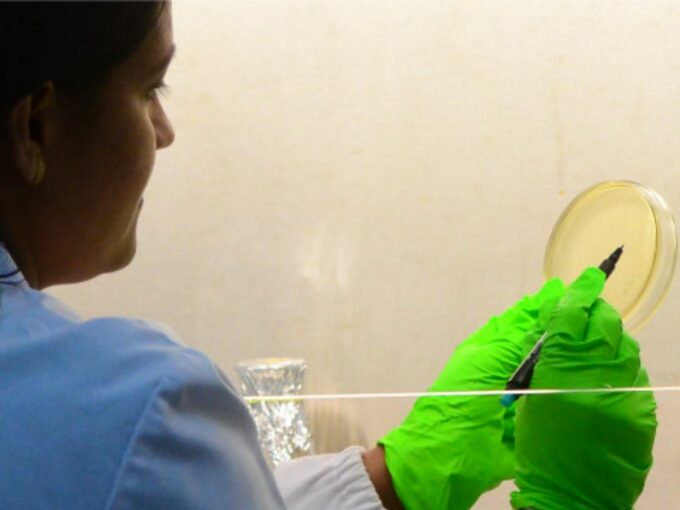 With this round, Bugworks, which also has offices in Delaware and Adelaide, has raised a total of $19 Mn in funding till date. Bengaluru-based venture capital firm 3one4 Capital is an existing investor in the startup.

Speaking to Inc42, Anand Anandkumar said Bugwork will utilise the fundings to complete the first phase of the clinical research of the GYROX series intravenous drug. The drug, currently being researched in laboratories in Bengaluru, is said to be effective against bacterial superbugs, which are typically resistant to commonly-used antibiotics.

Anandkumar said that it’s been decades since a new drug has been developed to kill such drug-resistant bacteria. It claims the lives of thousands across the world every year. Around 1.5 Mn people lost their lives in 2018 to a drug-resistant variant of tuberculosis. “Countries like India have a more poor record when it comes to dealing with multidrug resistance in bacterias,” Anandkumar said.

Taking these factors into account, Anandkumar spun off his previous company Cellworks Research to find a permanent cure for superbugs at Bugworks Research. The startup is working on a drug candidate which is a novel broad-spectrum agent that targets critical bacterial infections widely spread in community, hospitals, and hotspots.

Anandkumar said that these are primarily bacteria-based infections, unlike Covid-19, which is a virus-borne disease. However, he notes that bacterias are the silent killers in coronavirus cases as well, causing comorbidities and complications in patients. “Bacterial infections are silent tsunamis that are constantly killing other people,” he added.

The funding for Bugworks has come at a great time but Anandkumar said that there are more challenges ahead. Bugworks, in the initial days, was backed by the department of biotechnology and US-government backed CARB-X. It was also associated with Bengaluru-based incubator Centre for Cellular and Molecular Platforms (CAMP). All this support helped the startup to grow manifold in its six-year-long journey. Anandkumar said that the current funding round will help BugWorks to conduct crucial clinical trials.

He added if everything goes well then the startup would again be in the market seeking the next round of funds for further research and clinical trials. He also noted that an option like a business partnership with a huge pharmaceutical company would help Bugworks to skip these steps. “They can then take over the assets. In drug research, the innovative part takes place in the initial stage and then it’s only throwing money,” he added.

There are many startups in the biotechnology research space in India, but only a clutch of them have been backed by serious investors. Anandkumar said that funding from international investors validates Bugwork’s research. But he clearly remembers the challenges faced prior to raising funds. “Raising money in India for a deep science tech startup is a huge challenge. For us, the challenge was even bigger as we’re at our research stage only. Even though you’ve got a stellar team, you have won so many global awards, raising funds is never easy for a research-based startup,” Anandkumar said.

In the healthtech segment, investors have been on the lookout for startups which are into genomics or technology-based solutions. Even medicine delivery startups have found it easy to attract huge funding rounds. “Pure drug discovery startups, which take 10 years on an average to discover a solution and have a high failure rate, don’t get funded easily in India,” he added.

But Anandkumar is hopeful as the funding landscape in India is changing quickly, mainly due to the Covid-19 pandemic.

“It’s a wake-up call to the whole world that we have to be pandemic prepared for both viruses and bacteria. You’re going to find healthcare will become the darling of investors,” he added.

3One4’s Siddarth Pai also noted the fact that research-based healthtech startups will witness traction from investors in the months to come. In an interaction with Inc42’s founder and CEO Vaibhav Vardhan, Pai had said that a lot of funds are expected to flow towards healthtech startups which are into research and development of drugs and vaccines.

Recently, Bengaluru-based healthtech startup MedGenome raised $55 Mn in a fresh funding round while Pune-based MyLabs got a grant of INR 1 Cr from Action Covid-19 Team (ACT) for scaling the production of Covid-19 testing kits.