The company’s office at BTM Layout, Bengaluru has been locked since last week

A complaint has been filed in the BTM police station, users considering further action

The IIT Kanpur graduates and cofounders of Bengaluru-based coliving startup — Nikunj Bhatija, Jatin Mitruka and Aakash Verma — are said to be on a run along with tenants’ money (in crores) thereby affecting a large number of tenants residing in more than 100 of its leased properties across Bengaluru.

Tenants are continuously coming forward from different Homigo-rented properties with their complaints, thus the exact amount of fraud is yet to be assessed. However, based on the conversations with several tenants whom Inc42 spoke to — it is more than INR 30 Cr.

The LinkedIn profiles of the founders are no longer available. The company’s office at BTM Layout, Bengaluru has been locked since the start of March 2019 and all employees have been handed over pink slips, as per Inc42 sources. However, the online platform is active and is still accepting bookings.

We tried making a booking and were able to complete the process. 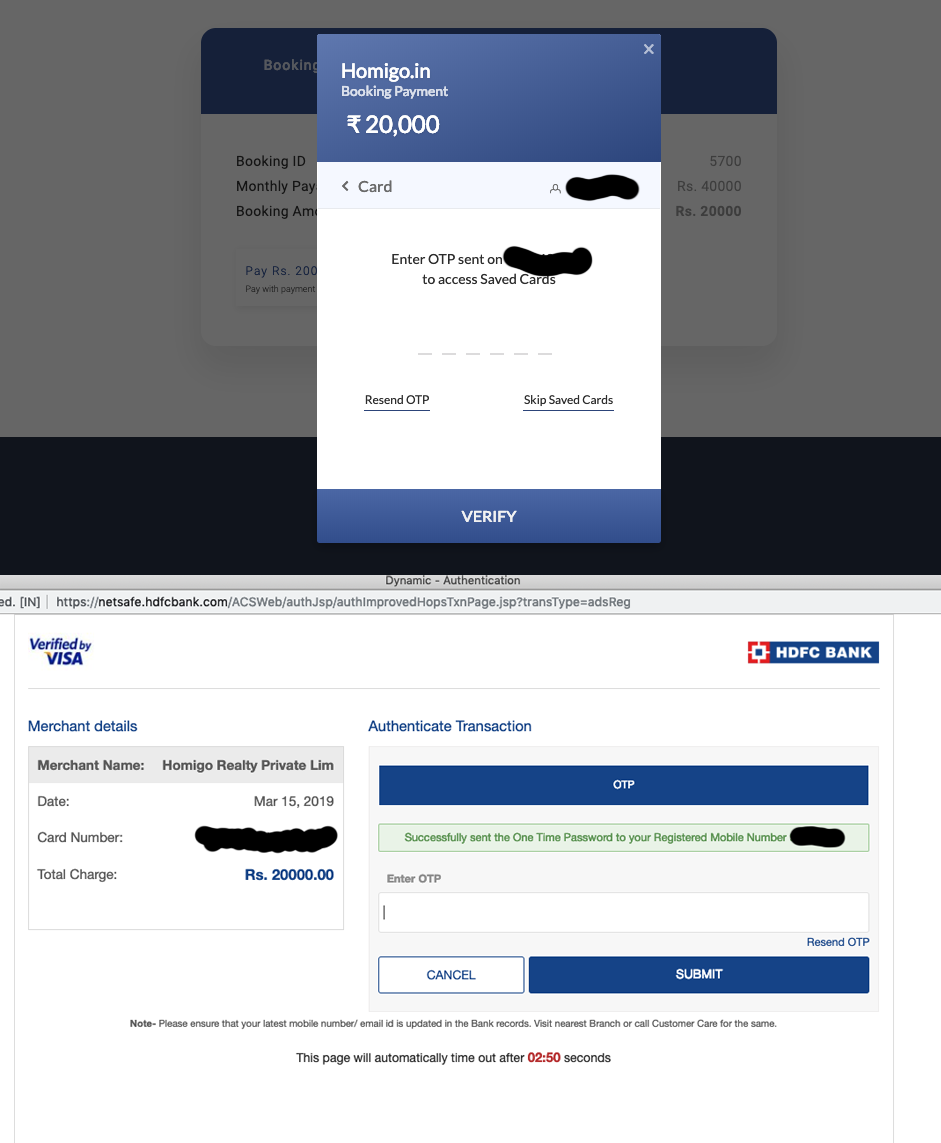 “We have not received any complaints or disputes from customers regarding payments to Homigo, adding that the company would suspend payments for any of their partners if their in-house risk management team detects anything out-of-the-ordinary.”

For now, the complaint has been filed in the BTM police station but the tenants are looking to file complaints in the police stations of other vicinities of Bengaluru. According to Homigo website, it had properties in nine areas including Koramangala, Indira Nagar, Domlur, MG Road, HSR Layout, Sarjapur Road, BTM Layout, Belandur and Marathahalli.

The Facebook page created by the Homigo tenants reveals that the people are now looking to sign a petition and lodge a complaint against the Homigo owners and their team of 35+ including Farhan, Advait Anand (digital marketer), Palak Bharti, Addep, Praveen Kumar (senior sales manager), Prateek and Amit Upadhyay (senior business development manager).

In a Facebook post, Palak Bharti said that the company’s employees have also been affected equally by the fraud committed by the company. She claimed that along with her, two other employees Adit and Pratik are already supporting the police. She has also requested the tenants not to file FIR against the employees. 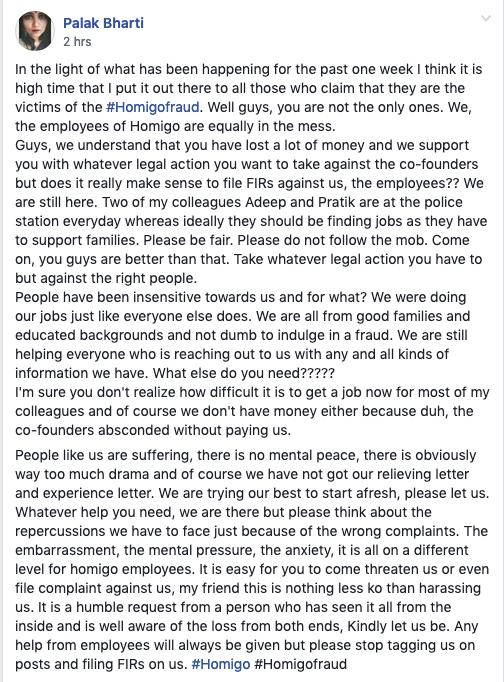 Inc42 calls (phone has been switched off) and email to Homigo’s co-founder, Nikunj Bhatija went unanswered.

According to Inc42 sources, most of the tenants have already paid the rent for the month of March 2019 which varies anywhere between INR 8,500 – INR 35K and have paid deposits in the range of INR 17K to INR 90K. Some of the properties were leased out by Homigo to new tenants at a price of INR 10 Lakhs for a period of two years.

Since, last two months, the Homigo team has not been replying to tenants’ complaints about poor living conditions, shortage of water and electricity and other needed commodities in their apartments.

As shared by one of the tenants with Inc42,

“I did not get any help from Homigo team in resolving my issues despite raising repeated support tickets using the slick website. No one at Homigo support team was picking up my call.”

He further added, “I somehow managed to secure the mobile no. of two of the cofounders of Homigo (namely Jatin and Nikunj). However, I realised that one of them had switched off his mobile phones and the other had activated call forwarding.”

This is not the only case. Several other tenants Inc42 spoke too have the same issues and now fear that they have lost their money in the process.

The tenants have continuously tried reaching out to the Homigo team regarding the notices issued by the flat owners, however even after multiple follow-ups, there has been no response. 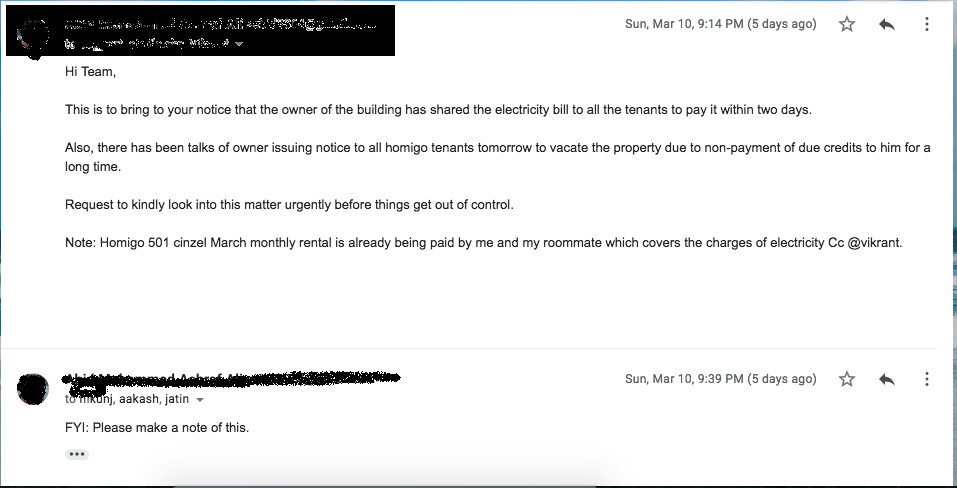 What Homigo Employees Are Saying

During our investigation, we found that the company has been facing a cash crunch for the last 24 months. In conversation with Inc42, one of the tenants said, “When I started making inquiries with all my neighbours and the guard of the building who was a Homigo appointee, I came to know that the guard have not received his monthly salary.”

One of Homigo’s employees Amit Goswami (then sales manager at Homigo) and also the resident at 601, Homigo Cinzel, stated that he was trying to resolve the complaints of tenants from the last 24 months on his own, without any support from the company and he is yet to receive two months salary.

“In the past 24 months, I have received little or no support from the organisation to fulfill my duties and umpteen no. of times have paid money from my pocket to ensure adequate diesel & water supply across properties. I have been defrauded by Homigo management and I am yet to receive 2 months salary,” he said.

Founded in 2015, Homigo was an online platform to rent designed and furnished places on flexible terms to the young working professionals as well as young students. The company was also known for organising interesting events and meetups to ensure that Homigo residents are never alone and get ample opportunities to interact with like-minded individuals.

As of January 2019, the startup claimed to have an inventory of more than 2,000 beds and has catered to over 5000 residents across Bengaluru. One can choose from only renting a bed, renting a room, or renting an entire house.

We had earlier reported regarding the fraud of being INR 30 crore, however, further investigation into the matter and discussions with the parties involved showed that the amount is closer to INR 20 crore.