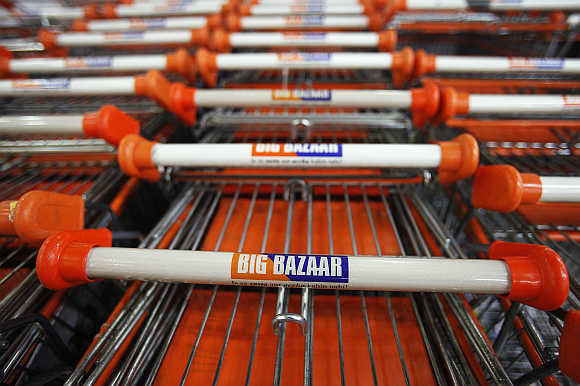 In a bid to combat the heavy discount offered by giant ecommerce firms, Kishore Biyani’s Big Bazaar takes one step further and announced the launch of a price-comparison app which will be live from next month. The app is said to beat online retailers with a price-cutting strategy.

In a recent interview, Biyani said “We are launching a price-match offer where if you shop from us and anybody else is selling cheaper than us at that moment, we will automatically give credits in your account – anything online or offline.” Apart from this, Biyani’s Future Group is also seeking to harness its presence on the ground to complement its push to counter online retail.

Big Bazaar is a hypermarket that sells brands categories from smartphones, electronics and furniture to grocery and general merchandise. It is currently testing the app that will let consumers compare prices offered by online and other offline retailers. Customers will have a week from the date of purchase to make the price comparison.

The price comparison app is currently being tested by Future Group employees at the Food Bazaar store in Vikhroli in Mumbai. Besides, they are also looking to conduct an omni-channel pilot programme in which its Big Bazaar and Food Bazaar stores will deliver goods to customers in Mumbai an hour after they place their orders.

An internal email sent to Future Group employees said that, the future of marketing initiative “will give customers the confidence to shop at Big Bazaar without worrying if any competitor is advertising products cheaper than us.”

Biyani, who’s just struck a deal to take over Bharti Retail, said “Who is afraid of ecommerce?” Biyani asked. “Even if you open 10 sites in 10 years, it will be 10% (of the total organised retail market). Secondly, worldwide, multichannel is the way. Traditional retailers doing multichannel is a bigger thing than pure online in any which way.” Future’s acquisition of Bharti Retail in an all stock deal valued the latter at INR 500 Cr.

Meanwhile in the same space for past two years, Flipkart, Amazon, Snapdeal and others have been offering lower prices to lure consumers, hurting organised retailers, already feeling the squeeze of an economic slowdown. With lots of funds available, ecommerce firms have that kind of cash needed to persist with this strategy.

In past, Biyani had criticised Flipkart and other ecommerce firms in India for undercutting the market and selling products at below the cost price, saying that it would hurt other retail channels. He once said that the ecommerce euphoria should last for 6-18 months. Then it will be over. You can’t live in the euphoria and reality will set in.