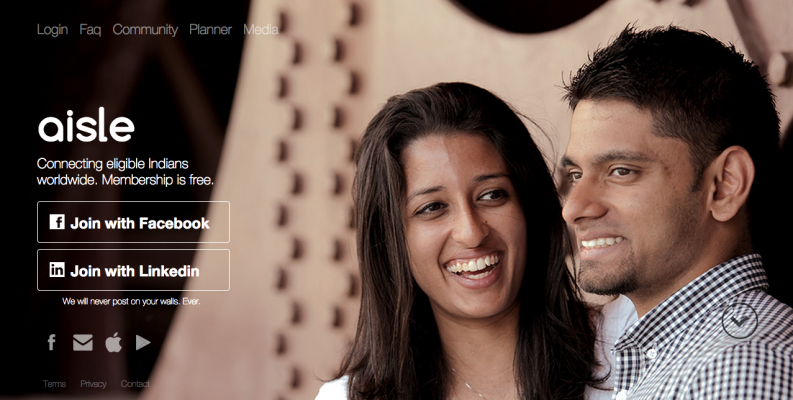 Bangalore based matchmaking portal Aisle.co has raised $100K in seed round of funding led by  several executives from Internet majors in the Bay Area and India. People including Anand Vijay of Microsoft and Shashank Mehrotra of Bigrock also participated in this round of funding.

Founded by Able Joseph last year, Aisle, now has about 4000 plus curated active users from over 30 countries in just 6 months into their launch with a healthy male:female ratio of 5:4. Most users on Aisle are a result of word-of-mouth growth, achieved through its sleek UI and exceptional user relations.

Currently, the startup is focused on Bangalore, Delhi and Mumbai, further it plans to extend it’s user base in other major cities in the country and in places with a concentration of NRI population.

Aisle plans to use the fundraise to hire talent, technology and further, it will be invested in other verticals making it the next fun, young startup to watch out for.

“A one-size-fits-all matchmaking portal in Indian conditions is unimaginable. Which is why we set out to address the problem for our friends and ourselves. And boy, aren’t we glad we stayed persistent.” says Able Joseph – Founder & CEO, Aisle.

80% of US singles have tried online dating. For a random sample of couples married between 2005 and 2012, 35% met each other online. Meeting online was even related to greater marital satisfaction and lower (25% lower) rates of breakup. As India get’s more westernized at a rapid pace, it is eminent for single Indians to sign up on an authentic brand like Aisle in search for their partners. “Considering the fact that we are the largest population in the world, even a small share of the market can mean big profits. But our goal is to bit into a major chunk of the market by 2017,” says the company.

Aisle closed their round with help from the team at TermSheet.