7 Charts That Encapsulate The Business Health Of IPO-Bound OYO

In the DRHP, OYO said that its “substantial amount of indebtedness” could “adversely affect” its financial flexibility and competitive position. As on July 31, 2021, it had Rs 4,890.55 Cr of total outstanding borrowings on a consolidated basis

Hospitality unicorn Oravel Stays, the parent company of OYO, has filed for an INR 8,430 Cr initial public offering (IPO) that will include fresh shares worth INR 7,000 Cr and an offer for sale through which many existing investors are expected to offload their shares, amounting to INR 1,430 Cr.

Here are four key highlights before we take a look at the company’s financial health:

Hit by the Covid-19 pandemic, OYO’s business has witnessed a downward trend with falling revenues. Continued losses and rising debt remain major concerns of the hospitality major. To bring its business back on track and make its way to profits, it may have to make massive efforts going ahead.

A look at its draft red herring prospectus (DRHP) shows that the SoftBank-backed hospitality startup’s total income fell by nearly 70% in FY21 to INR 4,157.38 Cr. Its total revenue stood at INR 13,413.26 Cr in the previous financial year.

The fall in revenue was largely due to pandemic-induced lockdowns in India and all other markets. 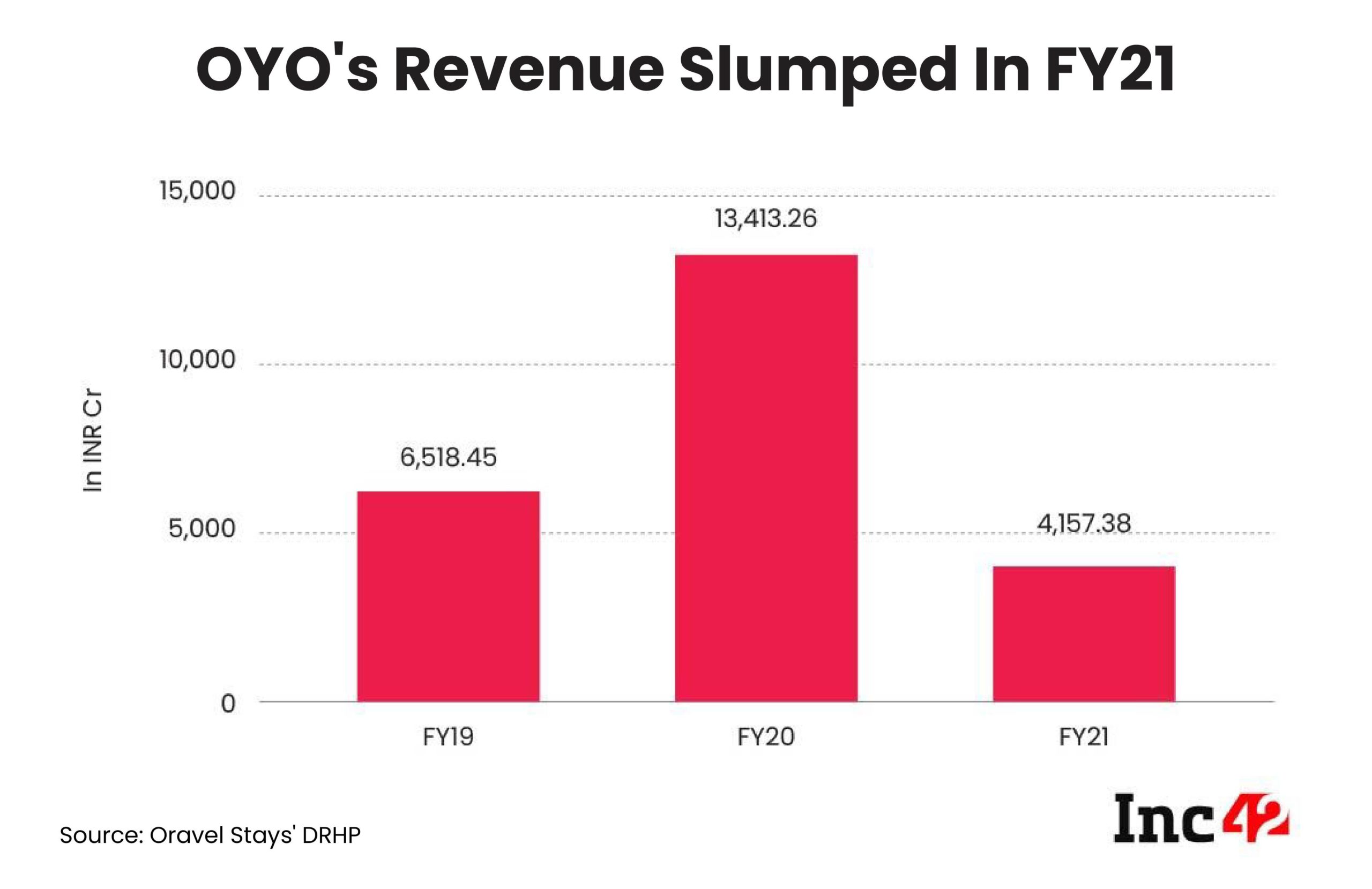 A reduction in expenses for employee benefits played a crucial role in bringing down overall costs. During the pandemic, OYO resorted to several cost-cutting measures, including mass layoffs, furloughs and salary cuts. Its employee benefit expenses came down by 63% to INR 1,742.12 Cr in FY21, from INR 4,765.28 Cr in FY20. 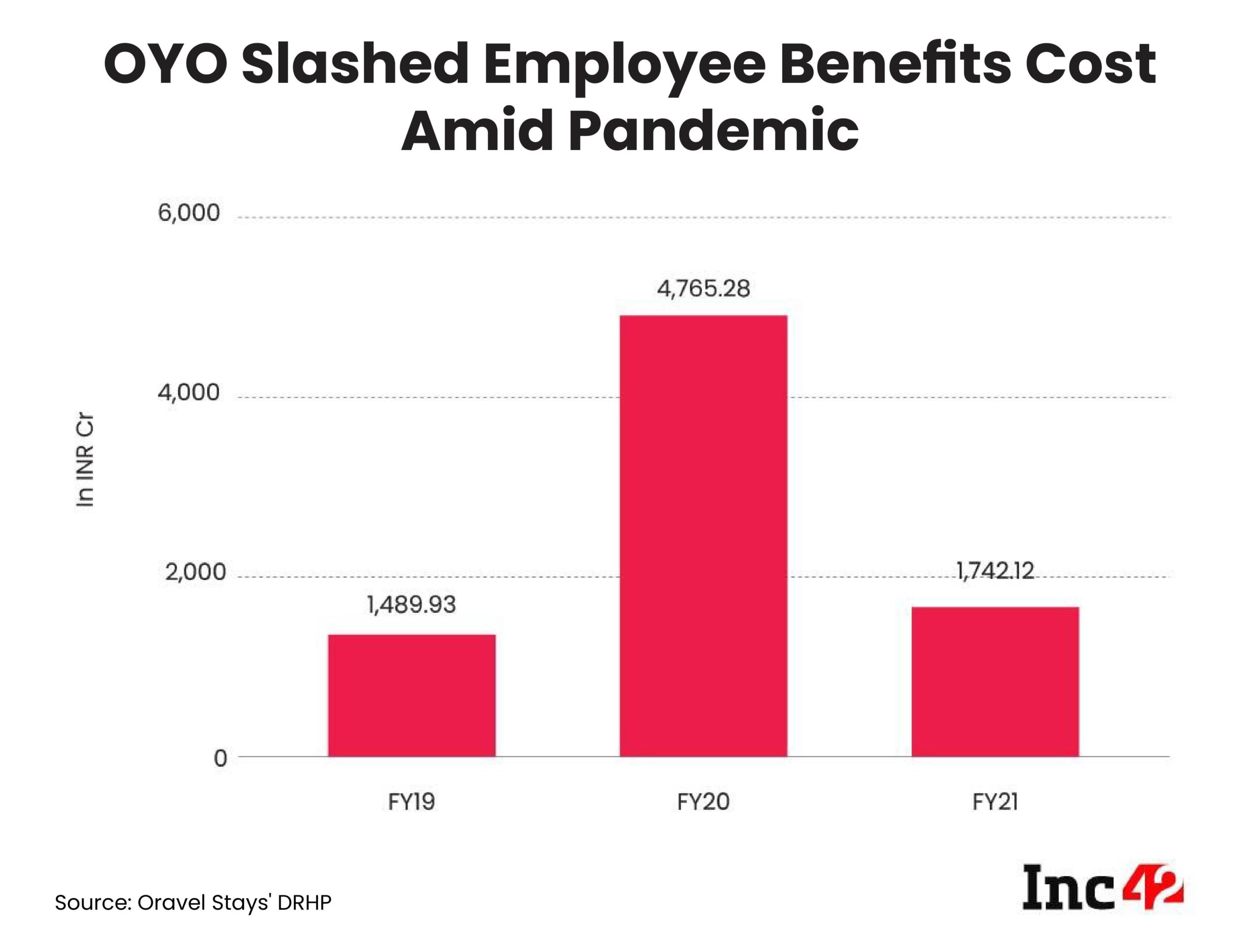 In the hospitality business, gross booking value (GBV) is a key indicator of the demand a hotel or the company attracts and its revenue flow. Hit by the Covid-19 pandemic, OYO’s gross booking value plunged by 67% to INR 6,638.89 Cr in the last financial year, from INR 20,088.37 Cr in FY20.

GBV from hotels and homes is defined as amounts payable by customers for bookings, post the deduction of cancellations and gross of discounts (such as loyalty points and OYO discounts) across all distribution channels, including OYO’s website, mobile app, call centres, third-party OTAs and other offline channels.

GBV from listings is the amount of subscription fees paid by the patrons from its listing business to the company for listing their storefronts on its platform. 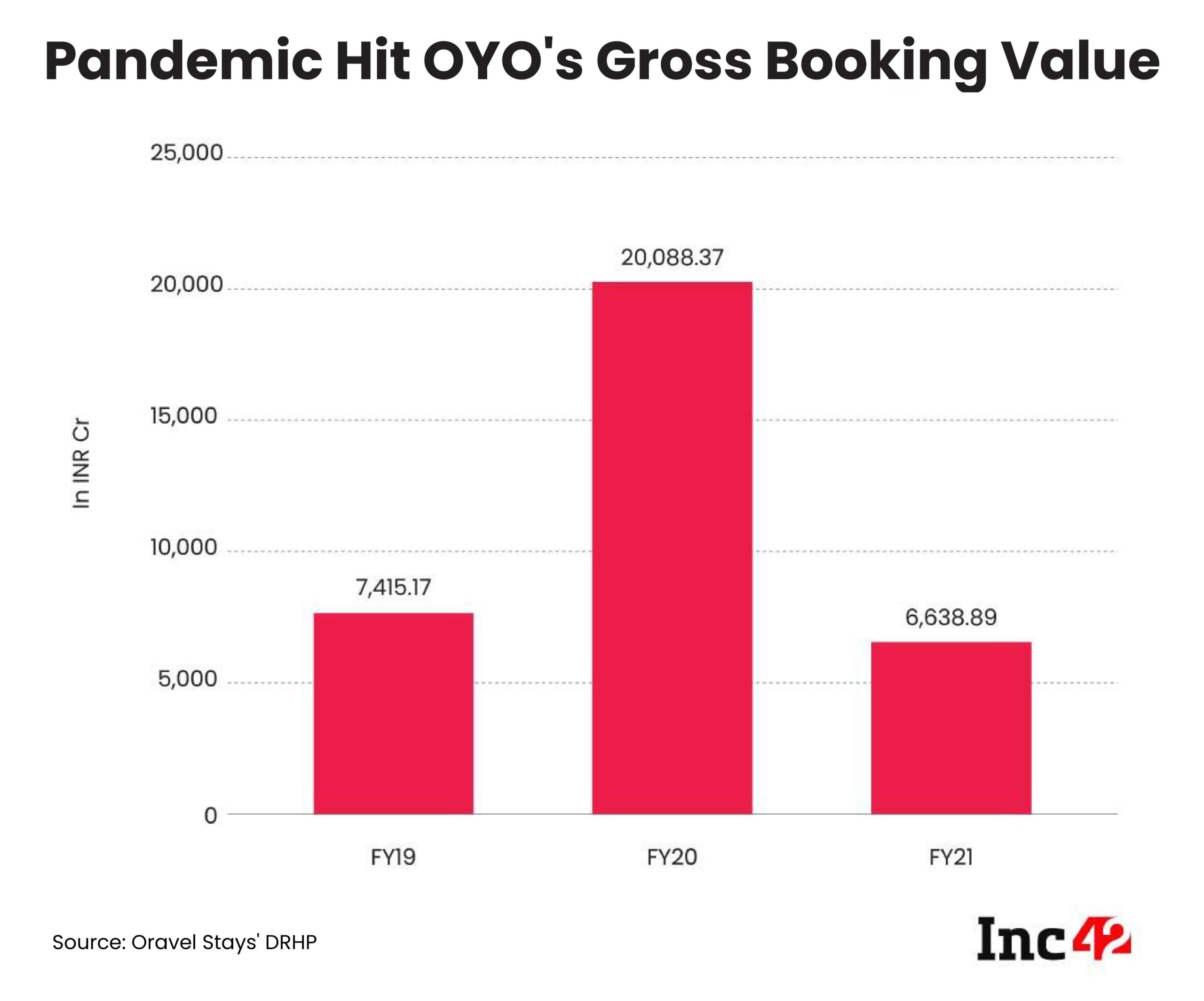 When a company is deep in debt, one gets a fair idea of its financial state. OYO’s debt levels have increased in the past two years, and the company, in its DRHP, has acknowledged its “substantial amount of indebtedness” that could “adversely affect” its financial flexibility and competitive position.

“We have a substantial amount of indebtedness, which requires significant interest and principal payments,” the company said in its DHRP. OYO noted that its debts could have significant effects on its business and make it more difficult for the company to meet its current and future debt obligations.

“Our debt obligations contain restrictions that impact our business and expose us to risks that could materially and adversely affect our liquidity and financial condition. If we require additional funding to support our business, this additional funding may not be available on reasonable terms, or at all,” it said in its DRHP.

Among other adverse possibilities, the high debt may also increase its vulnerability to adverse changes in prevailing economic, industry and competitive conditions, including fluctuations in exchange rates.

This would require OYO to reserve a substantial portion of its cash flow from operations to service its debts, thereby reducing the availability of cash flow to fund working capital and other operational and growth expenses.

As per the DRHP submitted to the capital market regulator SEBI, Oravel Stays plans to utilise nearly INR 2,441 Cr of its net proceeds from the IPO to repay part of the borrowings availed by its subsidiaries. 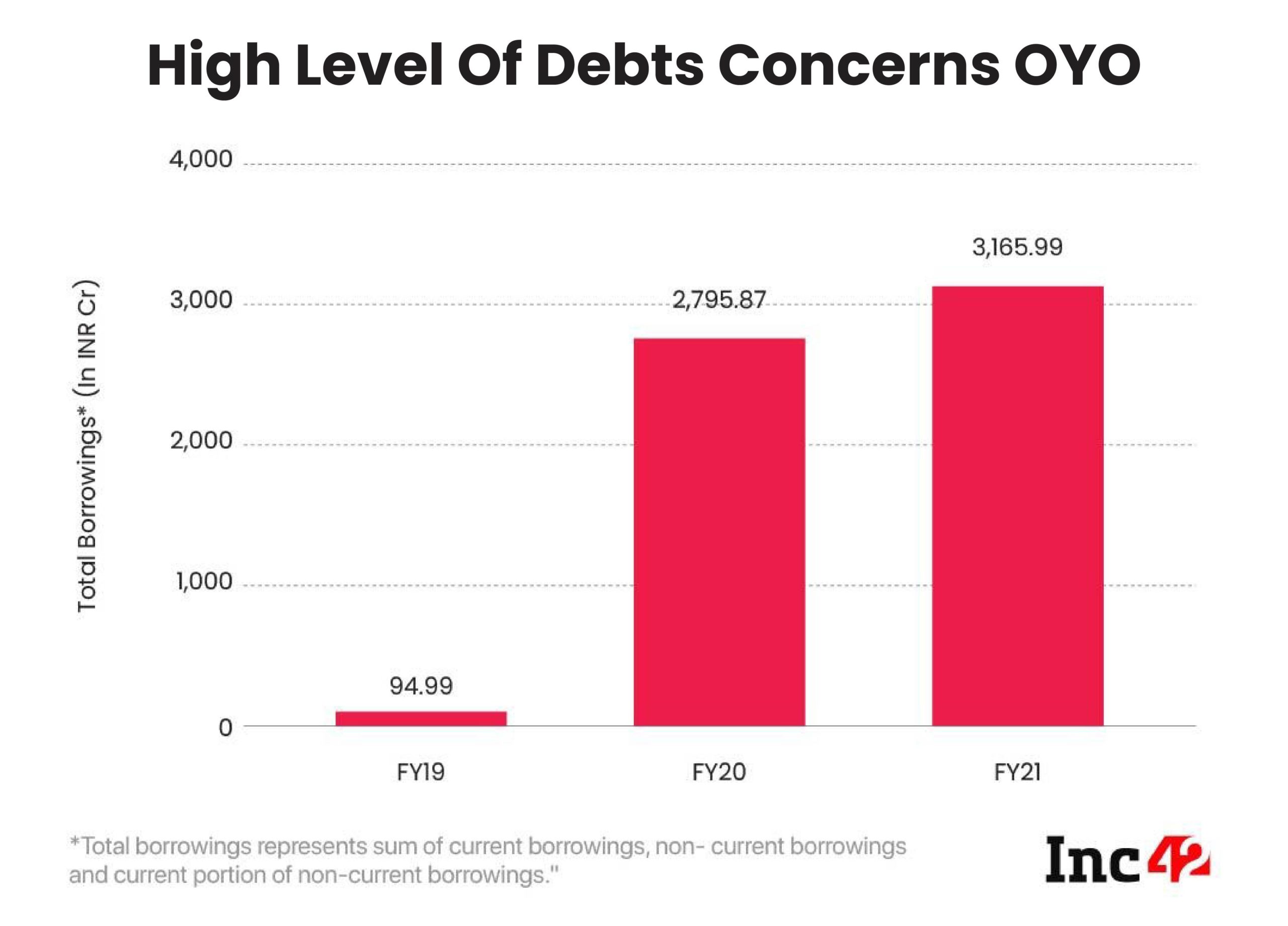 Too Many Lawsuits May Hinder OYO

Over the years, the IPO-bound startup has faced several controversies and lawsuits. Its IPO filing shows that the company, its subsidiaries and its promoters are involved in 65 legal cases.

Although OYO described the amounts involved in several cases as “not quantifiable”, according to its DRHP, the total amount involved in the ongoing cases add up to INR 347.52 Cr. These include 15 lawsuits involving the company, 16 against its directors and 34 involving Oravel’s subsidiaries.

Out of the 15 lawsuits involving the company, 14 have been filed against it and one has been filed by the startup. Among these 14, four are cases of material litigation, two involve action taken by statutory bodies or regulatory authorities and eight are taxation matters.

As on the date of DRHP filing, there were no criminal proceedings against the tech-backed hospitality startup.

Further, 16 lawsuits are also underway against the directors of the SoftBank-backed startup, and these are mostly cases against founder and CEO Ritesh Agarwal. 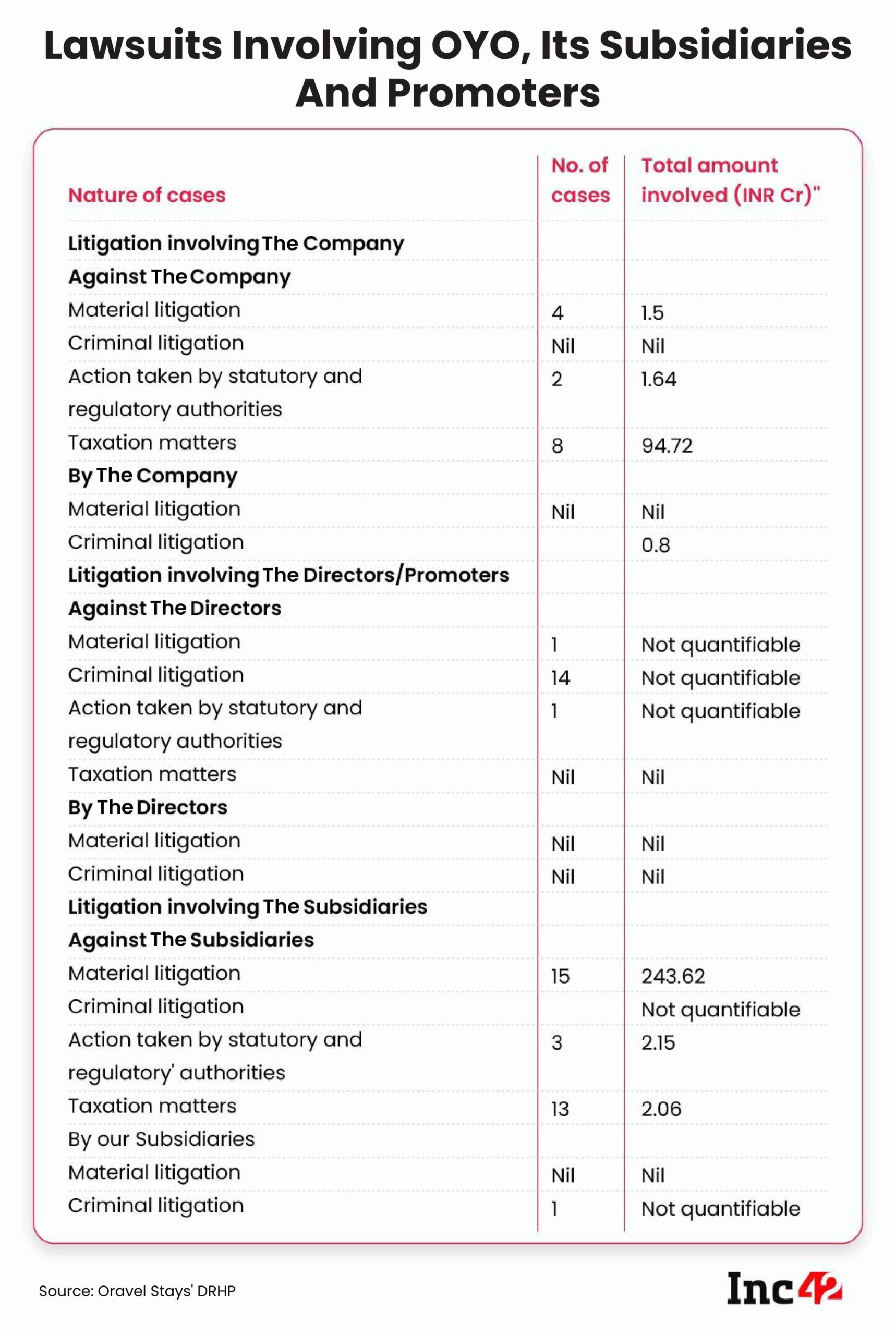 First, the rationalisation of its global portfolio with a focus on profitable supply across its core growth markets. Second, a significant decrease in the number of establishments that came with minimum guarantees or fixed payout commitments. It went down from 14.7% as on March 31, 2019, to 0.1% as on March 31, 2021. 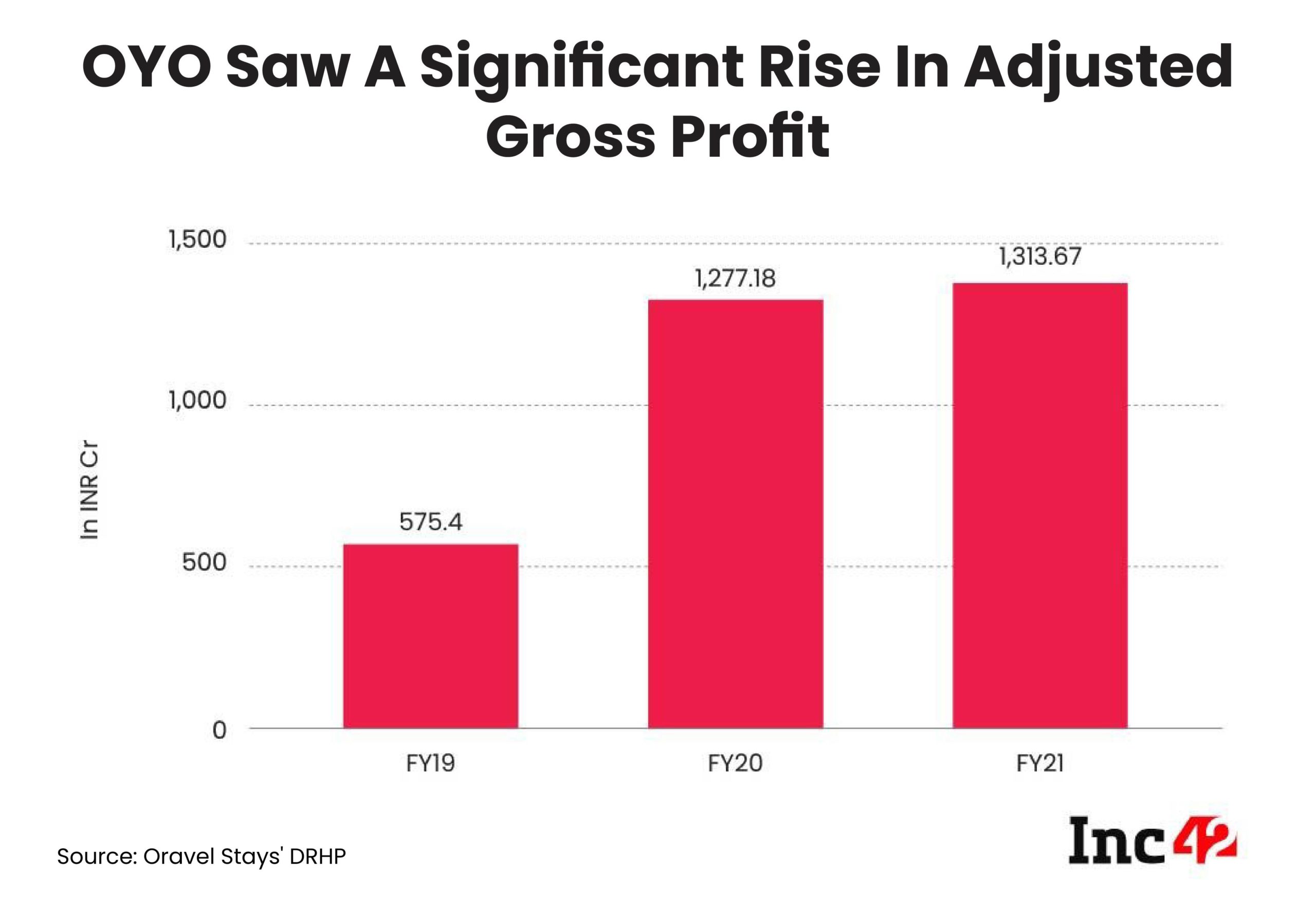 EBITDA, or earnings before interest, taxes, depreciation and amortisation, is a significant indicator of financial performance as it measures profitability. Adjusted EBITDA is all about standardising the EBITDA by removing anomalies. The outcome can be more accurately and easily compared with comparable to the EBITDA of other companies or the industry as a whole. 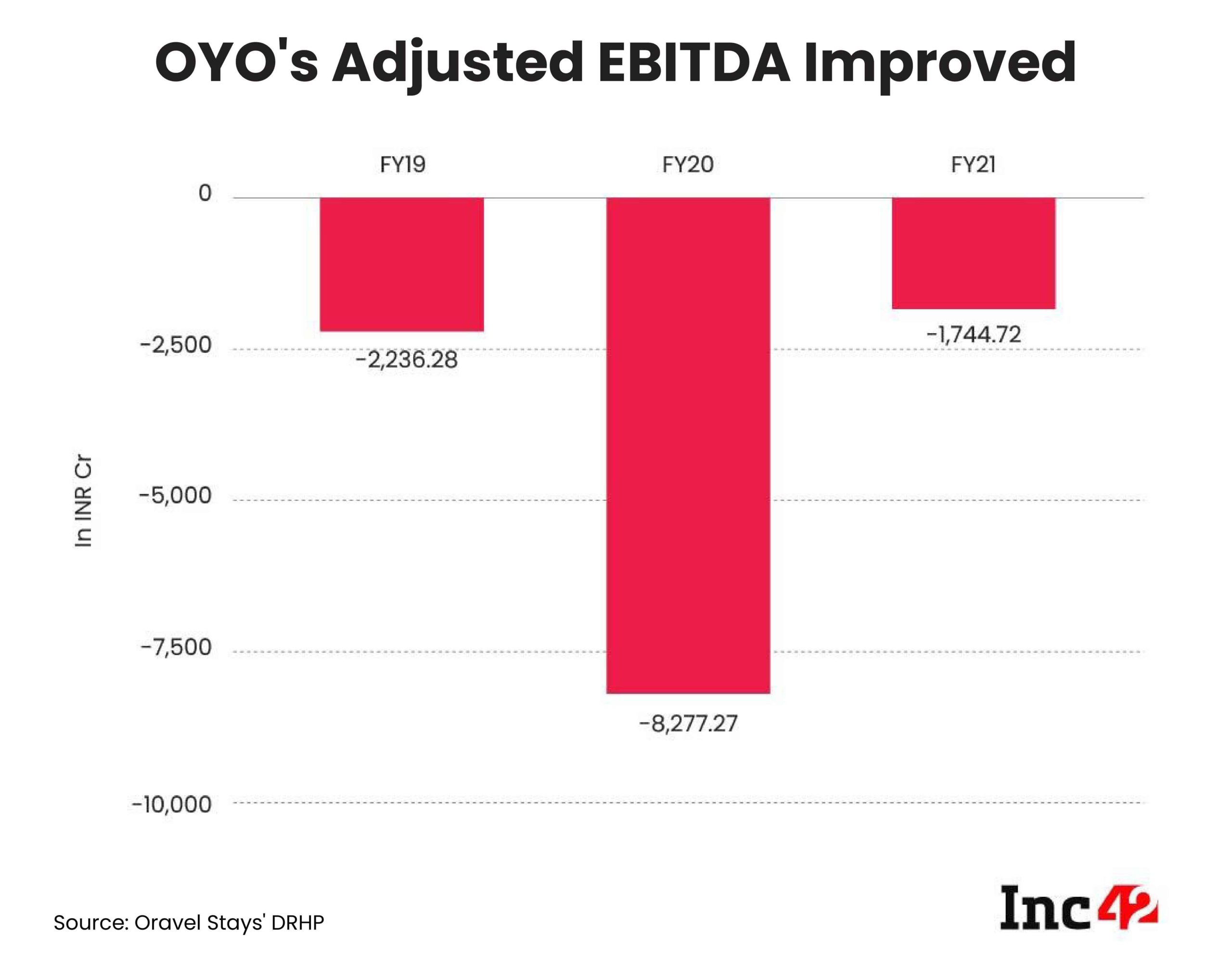 An in-depth analysis of its DRHP shows that since its inception in 2013, the rapid expansion of its business and footprint have also been accompanied by huge losses, lack of profitability and rising debt. The IPO could bring about a positive change in its fund flow.

Through the IPO proceeds, it plans to bring down its debt levels and also achieve business growth, which is contingent upon a successful listing.

Streamlining and rationalisation of its businesses and operations and a look for better revenue-garnering ways may increase its profitability.