Zify Is Here To Change The Way You Travel

Zify Is Here To Change The Way You Travel 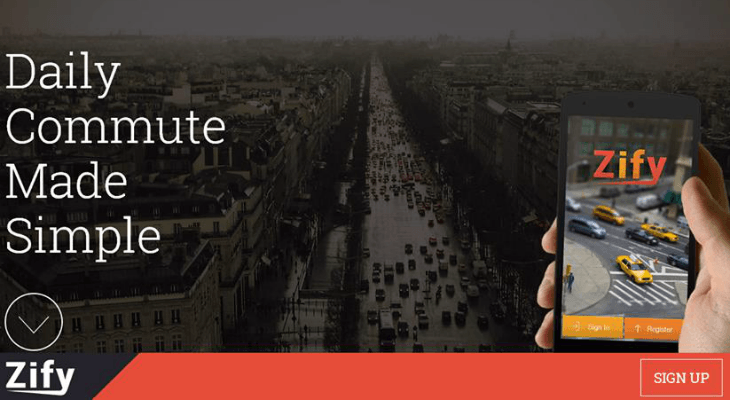 Often there are times when you keep waiting for the bus to take you to your office or even when you want to go out somewhere, you stick your hand out for the taxis and autorikshaws but nobody stops. What do you do then? Wait for luck to dawn on you and continue waiting for a ride or get drenched in rain and perspire under the hot sun?

Anurag Singh Rathore, the founder of Hyderabad based Zify, too faced the same problem. “The daily trouble and the chaos on the streets with most cars being occupied by just a single person, helped me in coming up with Zify” he says.

As one would see, people standing on the streets and asking for lifts is a common site nowadays. The concept of Zify is not new but somehow it doesn’t seem to work due to various reasons. After completing their initial research, Anurag knew it wasn’t a technical problem but people problem. And they found the key to make Zify work – and that was to understand the human behaviour while travelling.

Zify is a web & mobile enabled dynamic ride-sharing service. It’s a social platform connecting car-owners with passengers who are looking for a comfortable and affordable ride alternative for their daily commute.

“Our aim is to make your daily commute a fun experience”

Once they identified the problem, the next step was to validate the idea with the people and the best way to do that was to ask the people directly.  Within the first week of going live, the website received more than 43,000 views and it has been increasing thereafter by almost 100% month over month.

Then they started sharing rides with strangers by asking them about the idea. The initial response and the feedback provided by them propelled Anurag and team to start their journey.

Once the vision was clear, Anurag collected some of his savings and borrowed money from his friends to start with the initial ground work. After they generated a good traction and reached a stage where the idea and the solution was validated, they secured seed funding of 10 Lakhs from Hyderabad Angels, 50K Ventures, IIIT Hyd CIE and Parampara funds at TechStock event during the TiE Mashup, earlier this year.

The company was founded in February 2014 and is currently in beta. Zify’s market traction is good too. After a successful alpha launch, the initial list of users who have shown interest is in 1000s. Currently they are into an invitation based private beta mode. Very soon they would be making it available to everybody across multiple cities.

How Does it Work?

Zify is quite simple to use. After signing up and downloading the app, one must provide his/her destination and the source is picked up using GPS. Once the user posts a ride, he/she will get a list of users who are offering ride near to one’s location to the destination which he/she’s going.

The startup has formulated certain verification procedures in consultation with the law authorities and various government organisations. Their 2-way feedback mechanism also ensures that they collect feedbacks for each ride to better their services.

They have an interesting cashless system for payments and splitting fares and charge charge a fixed percentage commission on the total fare. When anyone shares a seat with a verified Zify user, they share the ride cost by transferring Zify Points to each other. These points can be encashed by simply placing a request with their customer care.

Zify claims that it has the ability to understand human behaviour in a better way, unlike its competitors like Lyft, SideCar and RidingO.

Considering the working class population alone in Hyderabad is around 16 lacs and out of that IT/ITES population is around 7 lakhs, their is a huge market potential as well.

Zify’s goal is to make travelling a happy and fun experience for the people. Even after so many technological advancements and social networks, people are more disconnected than ever. And that’s why the company wants to provide an offline social experience to the users. Also all their product offerings and services would be based on the motto of ‘Daily Commute Made Simple’.

The startup plans to break even soon, however their main focus would be solely on growth by increasing the user base and creating a valuable service. Once they achieve that, profitability would be a matter few months for them.

This is part of our special series, In Focus: The Hyderabad Startup Ecosystem, where we cover the tech and startup ecosystem of the next upcoming startup hub, Hyderabad.