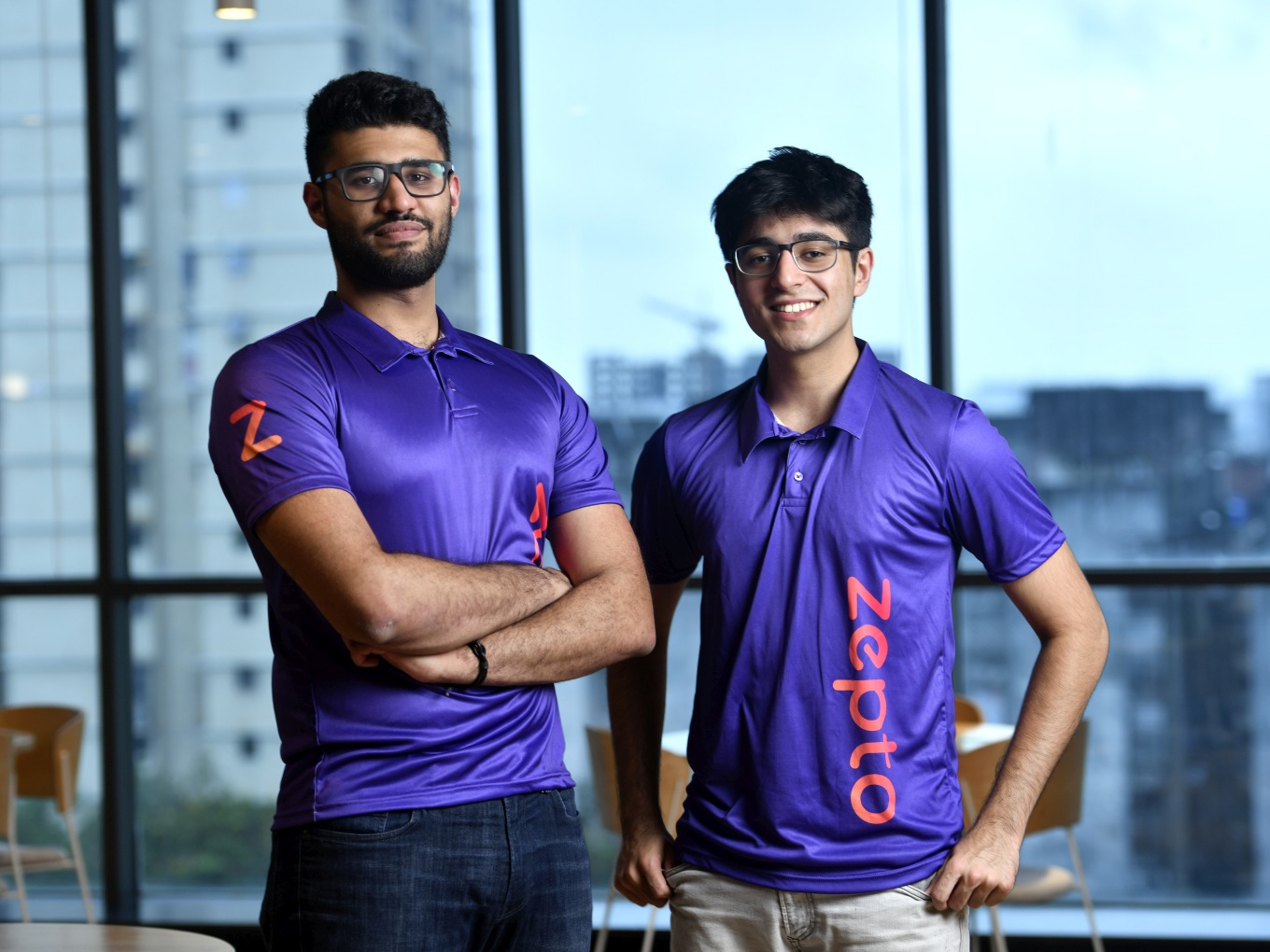 The startup was founded earlier this year by 19-year-olds Aadit Palicha and Kaivalya Vohra, who dropped out of their computer science degree courses at Stanford

With its dark store model, Zepto is going up against the likes of Zomato-backed Grofers, Swiggy, Dunzo, Tata-owned BigBasket and others

Online grocery delivery got a major push last year and this year, it’s in hyper-drive. Pretty much every player is focused on the speed of delivery, and that’s the USP for Mumbai-based Zepto too, the newest kid on the online grocery block.

The startup was founded earlier this year by 19-year-olds Aadit Palicha and Kaivalya Vohra, who dropped out of their computer science degree courses at Stanford University to focus on Zepto (formerly Kiranakart). Zepto promises grocery deliveries in 10 minutes (up to 90% of orders) through a network of dark stores and micro warehouses.

According to Palicha, it was during the lockdown in 2020, that the duo was disheartened by the mess of execution in the online grocery delivery market. “I think a lot of the competition in the space is either mis-executing grocery delivery or is focused on multiple different models, which is where we saw the opportunity.”

Today, Zepto announced a $60 Mn ‘early-stage’ round led by Glade Brook Capital, Nexus, and Y Combinator, and participation from angel investors such as Lachy Groom, Neeraj Arora, Manik Gupta among others. The round was raised at a valuation of $200 Mn-$300 Mn, the company said.

Speaking to Inc42, Palicha, who is also the CEO, said even though the company is only announcing the round now, it has been executing with the capital raised for some time now, allowing it to launch operations in major cities such as Mumbai, Delhi, Gurugram, Bengaluru and Chennai, with Hyderabad, Kolkata and others on the cards. 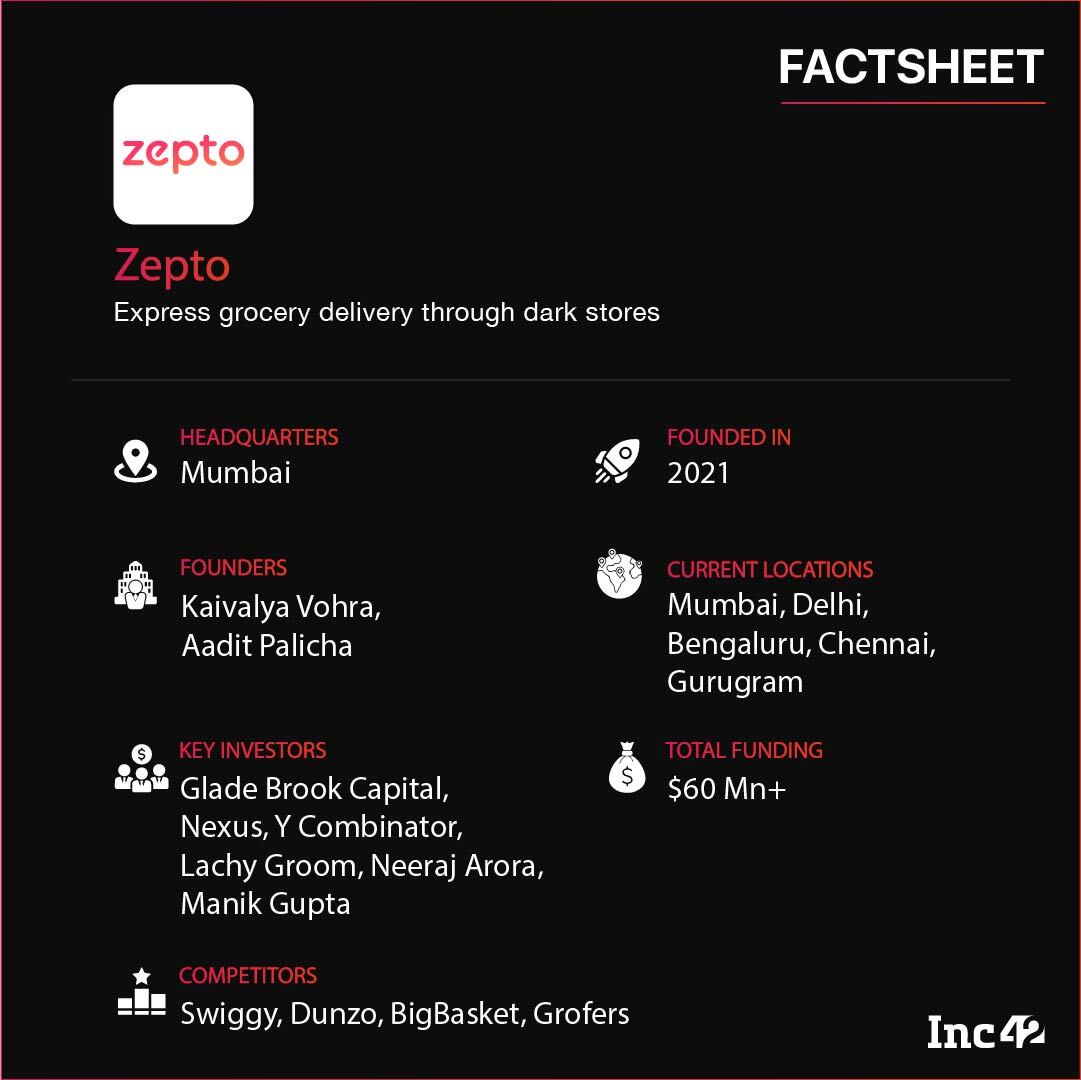 The Need For Speed In Deliveries

Of course, dark stores are nothing new in the Indian context, even though the model has not yet been fully explored. In fact, this year, most delivery platforms expanded to dark store-enabled grocery delivery. Simply put, a dark store is a small neighbourhood warehouse where consumers cannot enter directly and can only order online for a home delivery.

Zepto has some major competition in this regard, with some of the biggest delivery companies in India vying for a piece of the action.

Even marketplace giants have hopped on to the dark store bandwagon. Since 2019, Amazon India has promised deliveries in two hours under Amazon Fresh, which it has expanded to more cities in 2021. Walmart-owned ecommerce giant Flipkart is also claiming a similar delivery time for groceries under its Flipkart Quick service, which it launched last year amid the lockdowns.

Zepto claims its network is better optimised with the use of location intelligence and geospatial data — as Palicha puts it, this includes everything from geography, demography to road patterns, traffic dynamics, weather, last mile supply availability, real estate prices and more.

Besides this, Zepto’s dark stores and cold rooms have been custom-designed specifically to meet requirements such as ease of navigation, which allows packers to move as quickly as possible to pack the items in an order. The packers use tablets to know where each item is stored and get an optimal route to pick them all up.

Of course, while 10-minute deliveries is the headline, the actual delivery times may differ from customer to customer. He also said that each customer gets a custom ETA, which is how the company manages to keep expectations in check and still meet the delivery time promised. “In terms of median delivery time, it’s 8:47 minutes. An overwhelming majority of all orders are fulfilled in under 10 minutes, but maybe one percent of the orders might take 15-16 minutes or a little more.”

The next step is having delivery riders ready; the company uses contractors or gig worker partners similar to Zomato or Swiggy for deliveries. But allocation of riders is done prior to orders coming in, based on predictive analysis and data trends. The company claims its AI-powered tools help keep inventory levels as high as possible and allocate drivers intelligently.

Palicha added that the grocery delivery demand curve for orders is more or less flat throughout the day and there are no peaks and troughs like in food delivery, which sees a rush during the typical meal times of breakfast, lunch and dinner. This allows the company to track the patterns and allocate riders. “We’ve got some pretty extensive sales and operations planning processes, to essentially forecast by the hour what our demand might look like and plan exactly how many riders we would need for that.” 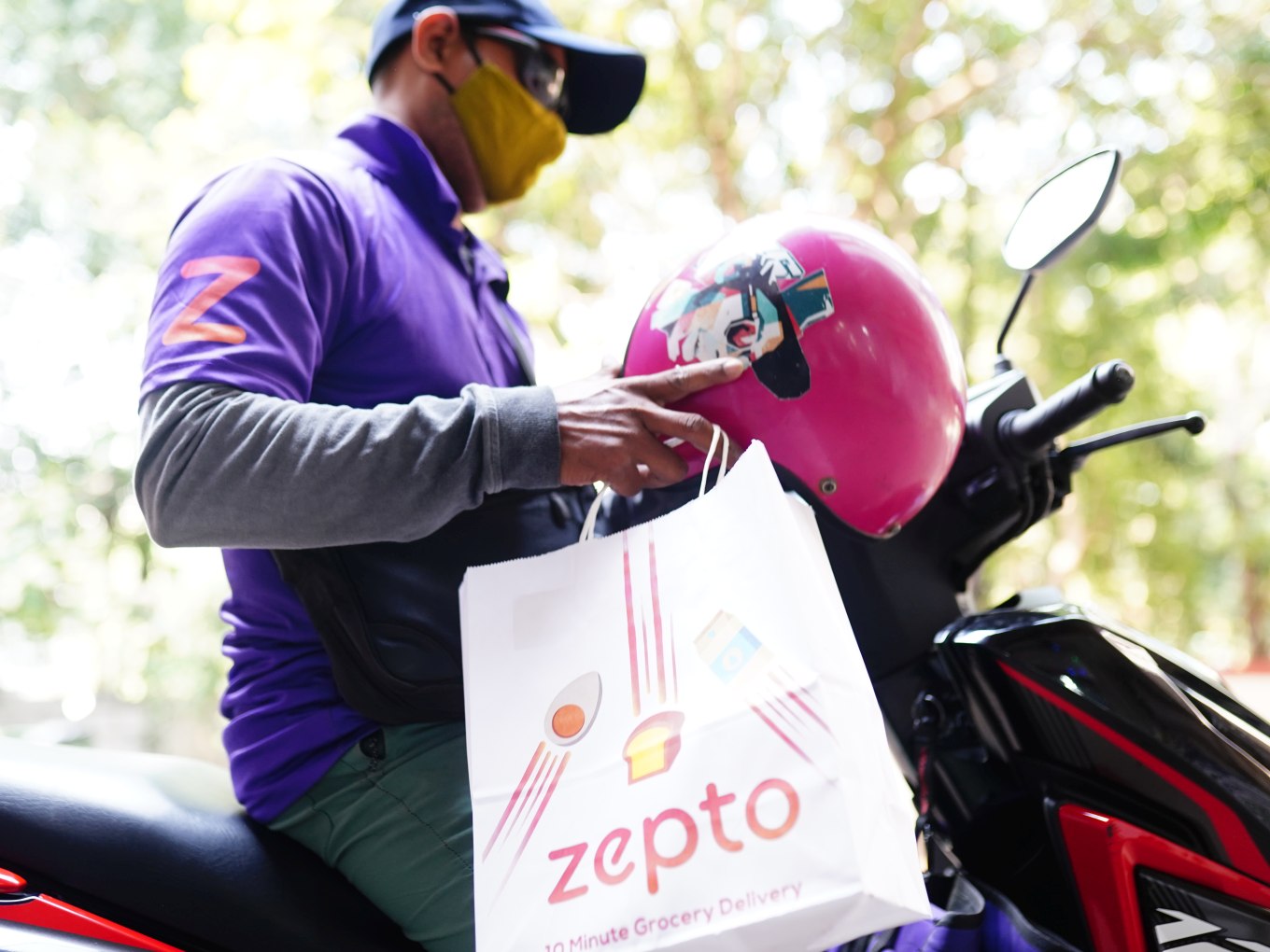 While Zepto did not reveal exact details of monthly active users or the number of orders it has fulfilled till date, the company claims to be growing 200% every single month. It’s targeting 100 dark stores by early 2022 across the country.

As per our conversations with logistics and retail tech players in the past, the cost of quick two-hour or four-hour delivery through dark stores comes at almost 40% higher cost than the traditional warehouse model in India. This makes dark stores difficult to scale in the Indian context, but the pandemic has created a positive momentum for change and transitioned consumers to online grocery, not just in metros and Tier 1 cities, but also in Tier 2/3/4 cities.

This explains the rapid expansion of dark store-led platforms. These dark stores not only allow delivery companies to control the inventory, but also get deeper insights into what product categories or individual brands have the highest adoption, which is something even Zepto does to know which products and brands to bring on board.

Currently, Mumbai is its largest city in terms of revenue distribution and customer base for the fledgling grocery startup. But Palicha is confident that even smaller cities have a lot of untapped potential that the dark store model can help unlock. “When we ran some experiments, we looked at the consumer data and there’s a lot of potential in markets like Chandigarh, Ahmedabad, Jaipur, Goa and others. We are very, very far away from even scratching the surface of how big India’s market is for this business.”

There’s no arguing with the size of the opportunity, but the reality is that Zepto is going up against companies that have 100x the funding and 10x the scale. The likes of Zomato-backed Grofers, Swiggy, Dunzo, Tata-owned BigBasket and others are not likely to back off the grocery delivery fight any time soon, given how much the market has evolved, and the millions invested in the segment.

The incumbents are also doubling down on technology to enhance their operations in ways similar to Zepto, so the real test for the startup is only just beginning.