A Genie In Disguise For SMBs, Xeno Brings Customers Back To Store

Every business whether offline or online thrives on one major thing-their capacity to gain loyal customers. Where bigger brands have planned marketing strategies like loyalty programs, membership cards, discount cards, etc., smaller brick and mortar stores lack in both planning and resources. And it’s a universal fact that even with the most promising business idea would fail, if it fails to reach the targeted audience.

The duo from VIT University, Pranav Ahuja and Ayushmaan Kapoor, tried to understand the problems faced by small offline businesses and came forward with Xeno, a tablet based marketing product. With Xeno, the New Delhi based team aims to provide a universal loyalty program for consumers. The ultimate idea is to give people complete freedom from carrying loyalty cards and allow customers to shop/avail services with the smaller nearby stores regularly and get advantages of a loyal customer.

The biggest pain point for small businesses is ‘Marketing’. To attract customers, they are connecting with portals like Zomato, Just Dial, etc. But then, getting repeat orders and retaining the existing customers is again a problem. What’s unique about our product is that it perfectly fits into the staff’s day to day process & business owners get value without even logging into our product,said Pranav.

Xeno is basically a hyper local rewards platform that at present connects people to businesses such as restaurants, retail stores, salons and dance academies. Customers can register themselves on the tablet present at the store POS with their phone number and can get rewards for the visit they made at these places. The customers can track their rewards via SMS or view it directly on tablet. Retailers on the other hand get an integrated marketing tool to create relevant personalized communications that work.

Usually, rewards start from their second visit to the place and it could be anything; free food, drinks, discounts, and more. For example – Lean Chef, a restaurant at GK offers its customers a free cookie on 2nd visit, a cupcake on third, a juice on fourth and a burger on fifth visit. While customers feel rewarded and get lured for repeat visits, the businesses get insights like determining one and done customers, the most loyal customers and even figure out loyal customers who are churning.

At present, businesses are paying a monthly subscription fees to get registered with the platform. The fee varies according to the scale of business and includes a tablet priced INR 5000-10,000 along with its stand, uploaded software and the complete guidance in setting the process.

Within four months of launch, the company has 80+ paying businesses and over 60,000 consumers who’ve joined loyalty programs via Xeno. “Businesses who were signing up 15 customers per week to their loyalty program, are now signing up 15 a day. That’s the difference Xeno is bringing”, said Pranav. 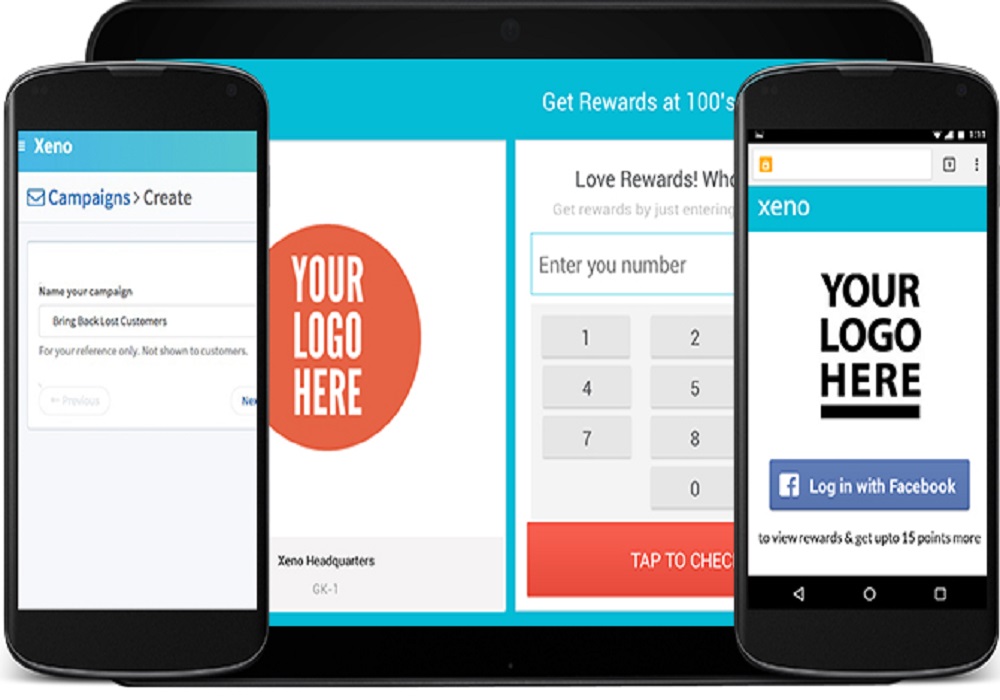 A Quick Look On The Indian Retail Sector

Target Market And Plans Ahead

“We are expecting to reach 1000 paying businesses in Delhi NCR within 12 months. Plus over 100,000+ consumers using the mobile app. After a year we’ll be expanding to other metro cities. To achieve the same we’re raising funds & actively hiring kickass PHP, Android devs & sales guys to join us on the journey,” added Pranav.

In recent surveys, 61% of SMBs agreed that social media helps them get new customers, but they have nothing to analyse the activity beyond posting. The team also plans to launch a consumer app in near future which could be used by the customers to like store’s facebook page. And as a customer checks-in with Xeno, their activity could also be posted to Facebook and Twitter.

As per Pranav, the biggest challenge is to make business owners understand the importance of data and help them shift from traditional forms of marketing to data driven marketing. Moreover, most of the businesses have already tried some or the other marketing app in the market, not getting the desired benefits. “That’s why convincing business owners about Xeno’s impact is challenging. But once they’ve signed up it’s a breeze. They just love the product” he added.

There are other startups in this space such as Smartwards, Squarecoins, Exclusife, MLoyal, and Hoppr backed by Bharti Softbank. However, the founders are pretty cool on the competition front. “All I can say is this, we have 100% customer retention, which in this segment, is saying something!” added Ayushman.

Its worth noting that the startups in this space are not only working on taking the complexities out of the process, but are also educating people on creating good loyalty  programs without any hassle. As per facts, it has been seen that a customer having repeat visits, spend 65% more than a new customer. Also, as per as a survey by Deloitte, 88% of businesses with loyalty programs are more profitable than those without.Thus, customer loyalty is definitely an asset to any business and any product helping to increase it, is worth a trial.