With 8.5 Mn Subscribers, Study IQ Is Bootstrapping Its Way To Take On Test Prep Giants

With 8.5 Mn Subscribers, Study IQ Is Bootstrapping Its Way To Take On Test Prep Giants 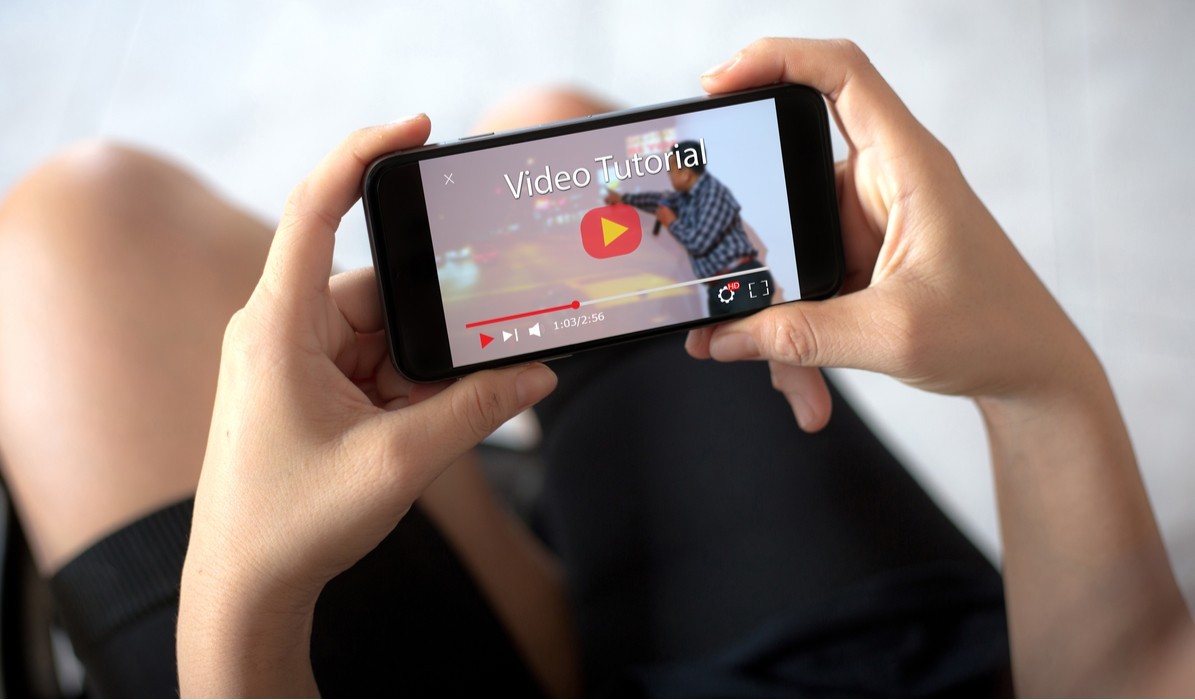 Competing against well-funded startups such as Testbook and Unacademy, Study IQ provides pre-recorded classes for entrance tests and exams

With 70K paying subscribers, the company claims a profit margins of about 30%-40% for its courses

As per Inc42 Plus, test prep market is the most funded edtech subsector between 2014 and 2019

The long standing criticism for unicorn startups in India has been the lack of profitability in these scaled-up and well-funded businesses. An Inc42 Plus analysis of a sample set of 30 Indian unicorns, approximately 70% of the unicorns in India have negative EBITDA which means they are losing money on a unit economic basis. The profitability chart included only one edtech startup — BYJU’S.

While Unacademy has joined BYJU’S in the edtech unicorn list and the likes of Toppr, Vedantu and others garnering investor interest and funding in recent times, the story of edtech startups in India is yet to reach the profitability chapter. Most are splurging huge on acquiring users and building a strong brand recall such as Unacademy’s IPL sponsorship. While many startups are competing for the piece of this $515 Mn test prep market in India, sustainability has always been a question.

But for test prep startup Study IQ, profitability and user acquisition are not incompatible. The bootstrapped company claims to be profitable from day one with the majority of its users joining organically.

“We do spend money on promoting our courses, but that majorly include Google AdWords and social media channels. People who come to our channel join only because of the word of mouth and I think the main reason is that we provide very well researched, consumable and crisp content.” said Study IQ cofounder, Dr. Gaurav Garg.

Founded in 2014 by Garg and Abhishek Jain, Study IQ told Inc42 that its revenue has grown nearly 10x in the past three fiscals. From INR 1.9 Cr in FY 2017, the company reported INR 13 Cr in revenue in FY 2020. YouTube ad revenues make about 18% of total revenue in 2020, which is healthy for a startup that began as a YouTube channel. Since then, it has looked to diversify revenue through an app, which offers paid and free lessons. Garg claims the company recorded 40K DAUs and about 400K MAUS in the first two months since launch. 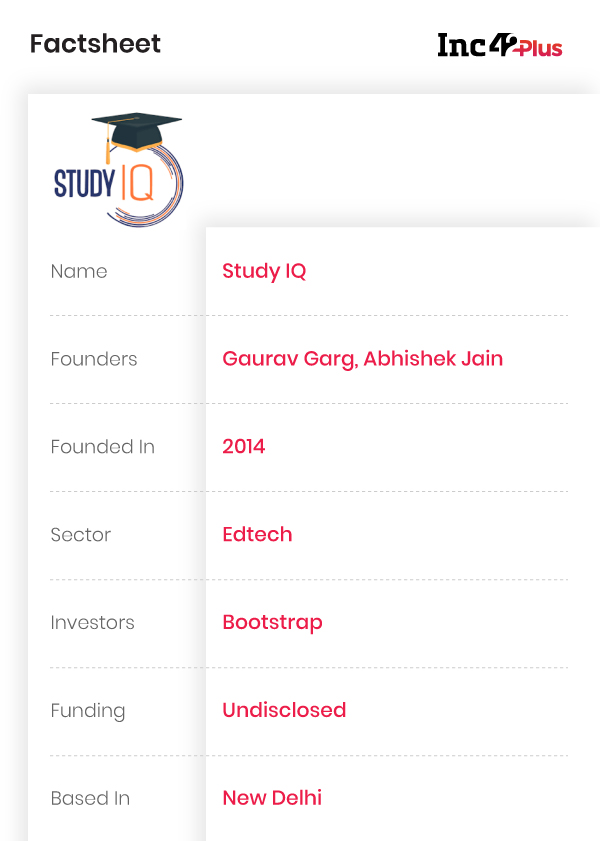 Interestingly, the founders met during their stints at TIME, a leading coaching institute for CAT (IIM entrance exams) prep. Study IQ today offers courses for a number of government exams ranging from UPSC, legal exams like CLAT/AILET, Railways, SSC, IBPS PO & Clerk, Insurance to defence ones like NDA/AFCAT/CDS besides the state PCS and clerk exams among others.

While the 8.46 Mn free subscribers on its YouTube channel make up the majority of its user base, the mobile app, launched in April, has till now garnered 70K paying users. In August, the company touched 100 Mn views on its YouTube channel and in a sea of high-spending startups, Study IQ says its profit margins are about 30%-40% of its total income.

In terms of other metrics too, the company has healthy numbers — average watch time per video on YouTube is around five and a half minutes. Given that the average length of a course video is 10 minutes, students are consuming more than 50% of the video.

Some of the popular courses on the platform include current affairs, UPSC, SSC, railways and bank exams. The paid users on the app are said to have an even distribution across urban and rural areas and the average age of the students is between 18 and 29 on the app and goes up to 40 years on YouTube, with Study IQ videos consumed as ‘quasi-media’.

“In this time and age when there is so much information available. No idea can be that unique. We are not doing anything so different that nobody’s done. We are just very good executionists, we have created a very well oiled machine that works in a very harmonious and synergistic manner to bring out the best results,” said Garg.

Talking about revenue sources, Study IQ founder said that 10% to 15% revenue comes from YouTube but the main source of revenue is now the paid app. Before the app launch, the major source of revenue for the company was selling courses over USB sticks (pen drives) and SD cards. This offline distribution has been discontinued now because it did not allow the company to offer low price points for its courses. Plus, there was the risk of piracy.

For students, the course costs on the Study IQ app range from as low as INR 1.5K (NCERT subjects) and go up to INR 18K (UPSC preparation). The app also has EMI options for the more expensive courses. The content in these courses is primarily bilingual (English and Hindi). While the company did add a lot of free content in Odia, Tamil, Telugu, Marathi and Gujarati, the response on these courses was not very good, according to Garg.

So far Study IQ has not focused on live classes and prefers to offer recorded lessons. According to Garg, live classes are more suited to the K-12 segment because students are learning new things and thus have more doubts. However, in the test prep segment, students have already studied the required concepts in school and so the number of doubts are fewer.

The company claims to receive a few hundred doubts every day which are resolved by the doubt resolution teachers on email or through the app.

Live classes have other disadvantages too, says Garg, such as high speed internet, and  extended hours. In offline classes, a student is one among 200 students and online live classes don’t address this or change it in any way. There is simply no upgradation in the online experience of the student. So for Study IQ, a two-hour lecture gets condensed into 30 minutes through the pre-recorded format.

Currently, the startup has 15 full time teachers who create video content, but there is also a team of teachers who help in creating learning material and questions. The full-time teachers have fixed salaries and also get a percentage of the sales, depending on the teacher’s profile, their contribution to the course and other factors.

Then there are also teachers who are preparing for similar exams but also help the company in creating content on a freelance basis. Study IQ’s overall team strength including teaching and non-teaching staff is around 110.

Going forward, Study IQ plans to add new exam categories to its list of courses such as judiciary exams which has been recently launched and also have plans to soon launch streamable courses on its website too. The company also has plans to foray in the K-12 space in the next six months. Further, it is expected to close FY 2021 at a revenue of INR 35 Cr.

So Why Launch A Mobile App?

“The reason to shift to mobile was to have more customizability in course content as compared to YouTube where the possibilities are limited to what YouTube platform design allows. On our app, we are integrating artificial intelligence and machine learning to provide smart courses,” said Garg.

Another major factor was content piracy and illegal sharing. Garg claims the company has spent a considerable time ensuring the integrity of content. It has partnered with various encryption companies to block screen recorders and screenshots. “On YouTube, it is very easy to screen record. I know a lot of channels which are suffering because of this, if your user segment is from Tier 3 or rural areas where spending capacity is not that high — a lot of them will try to get the content for free.”