With 18X Growth In US, Skillmatics Is Taking ‘Made In India’ Edtech Kits Global

Skilmatics claims it ended June with INR 4.5 Cr net revenue and is on track to close the year with INR 60 Cr in net revenue

With inbound investor interest and profitability since January, Skillmatics is looking to explore fundraising in early 2021 for expansion plans

“In one of the sessions with Surge, Shailendra [Singh, Sequoia Capital MD] told us that several startups think they have to choose between scale and profits, but it doesn’t have to be ‘either-or’ but an ‘and’ situation. This has stuck with me and my vision of building a truly global brand from India,” recalled Skillmatics founder Dhvanil Sheth.

After launching the company in 2017, Sheth has seen the company become bottom-line profitable in a matter of just three years. With over 10X Y-o-Y growth as a consolidated business and over 18X Y-o-Y growth in the US, its core market, Skillmatics is now ready to answer the recent clarion call of “Atmanirbhar Bharat” with manufacturing based in India and a chief focus on exports.

Operating as a direct-to-consumer edtech brand, Skillmatics develops educational products and learning games to enable children in building core skills in math and language to science and logic through gamification and interactivity. The company has sold over 3 Mn products till date, and one of its major competitive edges is the affordability as the packs only cost between INR 299 and INR 999 ($4-$15). In a price-sensitive Indian market, where other such tech-oriented education products are costlier, Skillmatics’ products have resonated well in recent times with the spike in edtech adoption.

With over 2K orders per day via online channels, Skillmatics has also built a strong omnichannel presence in India with over 3K stores including leading toys retailer Hamley’s. Even in the US, the company is looking to strengthen its omnichannel presence.

Talking about the financial performance, Sheth said, “We have closed June 2020 with INR 4.5 Cr net revenue and are on track to close the year with INR 60 Cr in net revenue. This is despite recording zero revenues in April and May, when due to lockdown restrictions on non-essentials we were unable to operate.”

To recover this, Sheth believes that the October-December period in the US will be important, as 60%-70% of the category sales happen between Thanksgiving and Christmas, which is the traditional holiday season in the US.

Despite the higher demand for edtech products and services during the lockdown, many startups had to curb their operations due to supply chain gaps. In the early days of the lockdown, in particular, startups did not have clarity on what was allowed and what was not. Plus, manufacturing factories were also directed to be shut down temporarily, which particularly impacted Skillmatics.

Explaining the supply chain, Sheth said, “We have our manufacturing across 25 factories in India, using small as well as large suppliers After initial shut down in lockdown, we are now aligning production capacity. We are also forced to focus on stretching the supply side, by updating capabilities, bringing in automation and more on the manufacturing level as well as to fulfil the present demand.”

Axis Bank To Acquire Up To 9.94% Stake In Go Digit Life Insurance...

Talking about the recent demand for a greater push on the Make in India front, Sheth said that the company has been doing so since day one. He noted that the on-ground efforts take time to show results, but there are several efforts in the right direction to simplify the process. While there are lags in getting initiatives up and running, considering the size and population base of India, the change cannot happen overnight.

Given the focus on eliminating China from the supply chain as far as possible, there will be plenty of changes in the manufacturing industry. Sheth said up to 95% of educational toys and products are made in China and due to geopolitical tensions, consumers are looking for Indian alternatives, where Skillmatics hopes to capitalise. 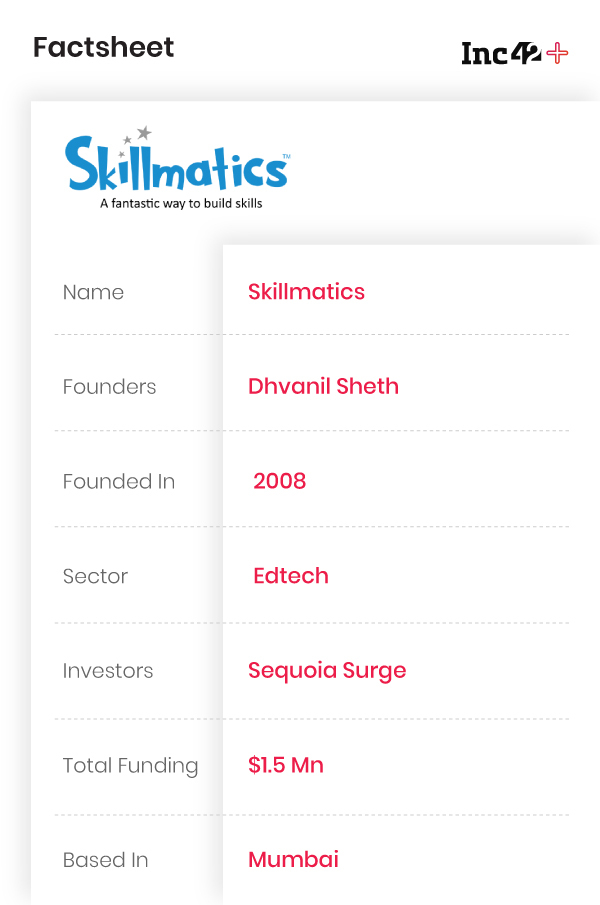 The Role Of The Product Development Cycle

While edtech products typically take 12-24 months to be developed considering the various nitty-gritties involved such as the ideation, intellectual property, teaching and learning methodology and more, Sheth claimed that Skillmatics takes roughly 2-3 months to develop its products.

“We leverage customer insights and analytics to identify trends and patterns, which are then used as product triggers. This helps us complete the product development in under three months,” Sheth added. It’s looking to launch five new product categories in the next six months, for example, with a focus on science-related products.

Given its online-first D2C-like approach, Skillmatics also has to hit the market faster, despite the fact that it is also competing on the retail front. Sheth noted that the company’s growth is 5x faster than others, which becomes its competitive advantage enabling it to have a higher strike rate.

Ideally, in the D2C segment — even in the hybrid model adopted by Skillmatics — brands have 35%-40% gross margin, but Sheth claimed that the company’s margins exceed this industry average. Sheth believes that this is enhanced because of the country’s structural advantages like cheap labour and technology advancement, and faster turnaround of its products.

Relating this to US competitors, Sheth explains that since most sales happen in the retail market in the last three months of the year in the US, the companies there prefer to have longer product development cycles.

Further, differentiating Skillmatics from its Indian competitors like Emotix and Playshifu, Sheth claimed they aren’t direct competition since their tech-focused products are costlier and have a different target audience.

Revenue generation and profitability are top attractions for any investor, but Sheth said that while there is a lot of inbound investor interest, the company isn’t looking to raise just yet. It may plan to raise in early 2021 to focus more on expansion plans. In the next 6-12 months, Skillmatics would focus on investing heavily in building its market in the US and expanding across all channels.

Skillmatics competitor PlayShifu has also seen robust growth in the US market and other Western countries. Cofounder Vivek Goyal told Inc42 in February this year that more than 600 schools in India, the US, UK, and Canada are interacting with Playshifu products on a daily and weekly basis. In the US, over 400 schools are said to have brought PlayShifu’s educational toys into the classroom.

While India is a strong market, it is still a growing market, where a consumption boom will happen over the next 10 years, with the increase in discretionary income and spending. In contrast, the US is already a $30 Bn market, Sheth said. So with the right product-market fit, the growth potential is higher in the US right now.