Dot Me Or Not Me: The Girl Who Was Not Sure Of Her Fashion Choices Is Now Helping Thousands Make The Right Choice

Dot Me Or Not Me: The Girl Who Was Not Sure Of Her Fashion Choices Is Now Helping Thousands Make The Right Choice

Coming from Indore, frankly speaking, I did not have a great style sense, begins Meghna Saraogi.

This could be a candid confession from anyone but it becomes all the more striking when you realise that it comes from someone who now is the founder of a social networking fashion app Styledotme! While Meghna may not have had a great style sense back then, what she did have was a habit common to many young girls – compulsive shopping!

Working as a graphic designer in Designosis in Delhi, Meghna would find herself locked in trial rooms, taking pictures of herself in various outfits, as she fumbled between deciding what to buy, what not to buy, what looks good on her, what doesn’t. Invariably, she would end up sending pictures to her friends, calling them to take their opinion before making a purchase. The whole process was so very time-consuming and frustrating. And there were more of her tribe, plagued by the same dilemma. Says Meghna,

I realised that lot of other people face the same problem. That’s when I thought that there should be an instant fashion advice platform, which would make it so much more convenient for shoppers to make a purchase decision, without wasting much time. 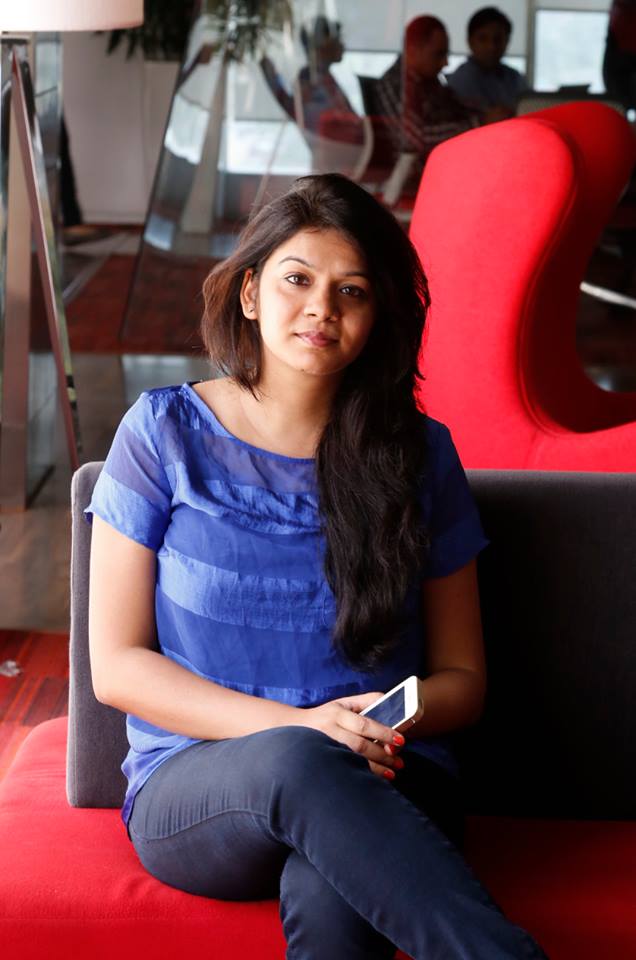 While the inspiration came to her in a jiffy, it took some time to figure out the exact dynamics of how the platform should look like. Her choices were to either make it a combination of ecommerce and a polling/advice platform or just a simple fashion platform. Ultimately she decided to not mix everything up, decided against the ecommerce part, quit her job as a fashion designer, and moved back to Indore in 2013, to save on living expenses and work full-time on her idea.

Initially collaborating with a team of developer students, she worked on the first version of the app. In 2014, Styledotme – a fashion app that helps users make quick and instant fashion decisions through their networking of friends and followers, along with expert advice – was launched on Android. Realising quickly that fashion and iOS go extremely well together, with a few tweaks and a pivot, Styledotme was launched on the iOS platform too, in April 2016.

The app allowed users to instantly get connected with their friends and followers and ask them to vote for the selected choices. In addition, it boasted of a feature wherein a timer can be attached to the SOS notification that countdowns while reminding the urgency to vote. 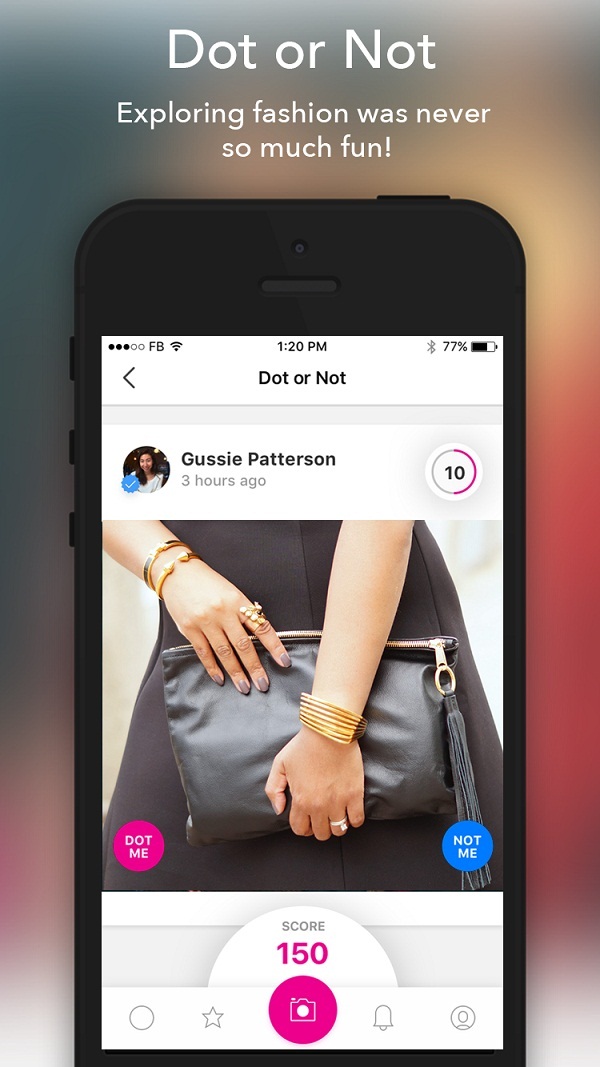 The girl who was not sure of her fashion choices is now helping thousands make the right choice!

Dot Me Or Not Me

The fashion app helps people get instant fashion advice through the help of dots which are votes from friends or nots (which are rejects). So if a user is unsure of what to shop, what looks good on them, they can simply upload his/her picture on the app. Their friends, who follow them along with 200 active fashion bloggers on the platform, can either dot them, thus approving the look or not it, which means they disapprove of the look, dispensing instant fashion advice while shopping.

More so, because people would need advice the moment they are shopping to make a decision and not a few hours later when that advice would have no value, the app allows users to put a timer while posting. This timer sends out a notification to everyone who’s following the user along with the 200 fashion experts so that the user can get advice within time. Additionally, the app also allows people to comment with the images, which can have tags and links, thus redirecting the user to relevant sites to purchase the products he/she likes. 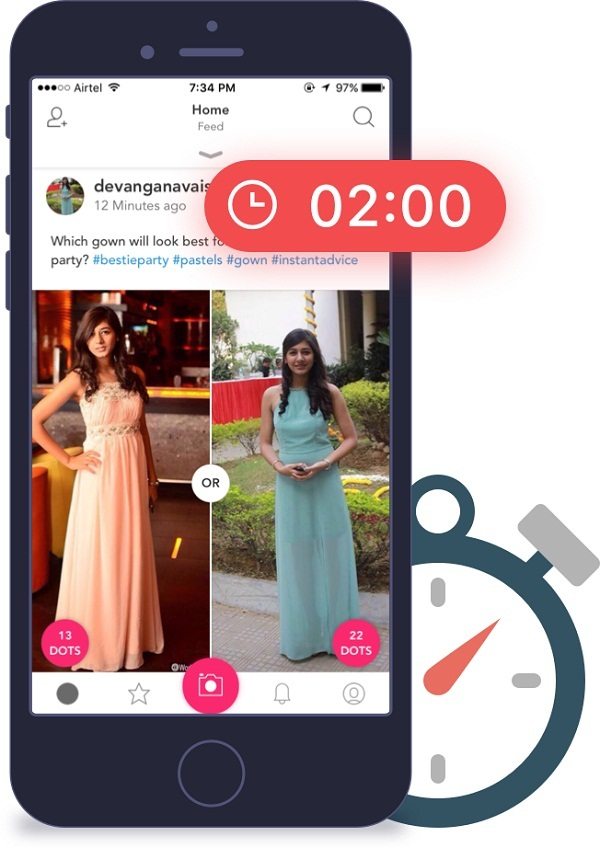 The app targets users mainly from 13 to 30 years of age. Admits Meghna, “Initially we thought it made sense only for women. But now, over 45% of our users are men, who are not only looking for stuff for themselves but their girlfriends, sisters, friends. We have so many trial room selfies of men on our app. Hence the use cases are increasing every day. I never thought that men would be so confused!”

Meanwhile, the fashion bloggers, stylists, make-up artists, and even event designers are the influencers or the experts on the app. To differentiate them from other users, they have a distinct badge on the app. How valuable they are to the platform can be gauged from the fact that Meghna has personally spoken to every single blogger on the platform.

Building A One Stop Solution For Everything In Fashion

With the launch of the iOS and Android versions this year, Styledotme’s app downloads have grown to 15K with about 5,500 monthly active users on the platform. As per Meghna, the in-app engagement too remains high. For instance, in less than two minutes, 20 to 25 people can be called upon to vote and comment.

Though the startup is not revenue-positive at the moment, starting next month the revenue model will be in place. As of now, one can only advise through the dot/not feature or comments. But going forward, people will be able to request for instant advice, online and offline.

The online advice will be dispensed through chat and video while the offline advice means that one could actually book sessions with experts. Styledotme aims to monetise through commissions on the more curated, more advanced advice vertical. Additionally, another revenue model will be to charge brands for curated content on the platform and for redirecting users to their respective sites for product purchases. 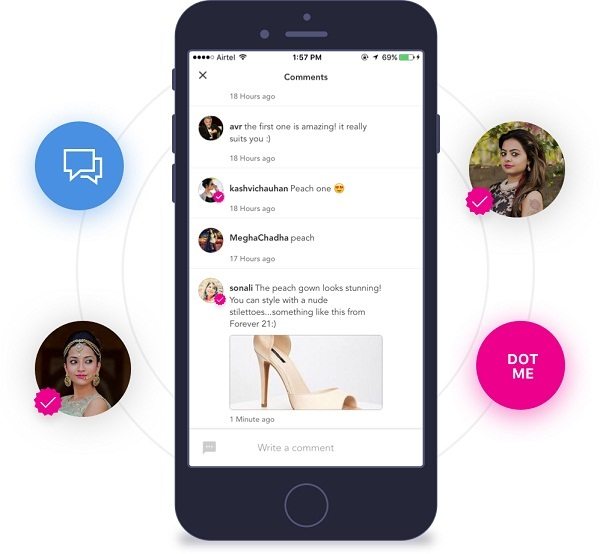 Adds Meghna, “In terms of product, we are looking at building a one-stop solution for any and everything in fashion. So if you want to know: where do I buy something, how do I look, how do I style, we want Styledotme to be that stop for you. In terms of downloads, by the end of this year, we plan to have 1 Lakh downloads.”

In February this year, the startup raised an undisclosed amount of funding from Indian Angel Network. The investment was made under the ‘Small Ticket Funding programme’, which was announced by IAN last year. Under the initiative, early stage ventures can instantly raise a funding of INR 25 Lakhs to meet immediate fund requirements. The startup is looking to raise more funds in the immediate future as it eyes further product development and a larger audience.

While Styeldotme has mostly grown organically, it has not shied away from undertaking interesting marketing campaigns. One such activity was building a trial room at Janpath market in Delhi! Explains Meghna, “Because most of our users post from trial rooms in the store, so we thought why not put up a trial room on the street.” The campaign went viral, bringing much-needed visibility to the startup.

The core team consists of four team members which, besides Meghna include Avinash Ruchandani, an IIT/IIM pass-out who recently left his cushy job at Accenture; Akhil Tolani who sold his first app when he was merely 15 for $100K; Sahil Deswal who has developed four android apps for multiple startups and Lalit Vijay an ex-tech co-founder of foodtech startup Zeppery who leads the entire back end operations. 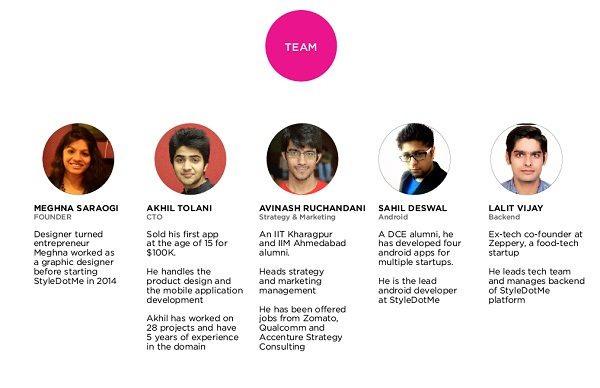 Fashion discovery is going to be a multi-billion dollar opportunity in the coming times and it is but natural that quite a few players are already trying to make their mark. Personalised fashion discovery engine and shopping assistant Fabence, Seedfund-backed Voonik, and Tiger Global backed Roposo are some of the formidable players trying to simplify the maze around fashion discovery.

Another Mumbai-based online fashion styling platform StyleCracker, is for people who wish to get styled by the country’s reputed and renowned designers in the fashion industry. Then there is WithMe – a platform built around fashion inspiration and ideas that help its users decide on what to buy or wear. A user’s social community and a bunch of fashion experts answer their style queries in real time.

Meghna, however, is unfazed by the competition. She says, “What differentiates us from the rest fashion platforms is our immediacy. On all the others, you don’t have the scope of instant fashion help. How will people respond quickly unless they have seen your post real time?  So we are counting on the instant factor and the urgent needs of a shopper.”

Apart from that, she goes on to add that the kind of efforts the team has put in building the product, its UI and UX, also makes it stand out. She claims that the app doesn’t look like an Indian app, it has an international look and feels to it. Technology features such as sentiment analysis which will enable it to highlight the best comment or the most valuable comment to the user, etc. are also meant to help the startup stand apart. She concludes,

It’s all about execution as well as the value proposition we are giving to the customer. We are looking to build a global product with a strong technology, a product the world would want to use.

As per a recent Morgan Stanley report, the Indian ecommerce market is estimated to be worth $119 Bn by 2020. Added to that, smartphone users in India are projected to reach over 500 Mn by 2018, pointing out to the huge opportunity at hand for fashion discovery startups like Styledotme.

As more and more people come online for following fashion trends and seeking fashion recommendations, fashion social networks will amplify, gaining more traction and thus attract a larger number of ecommerce clients who would want to leverage their networks for boosting sales. Styeldotme’s challenge will be to become the preferred fashion discovery platform in comparison to its competitors.

In that sense, its focus on building a technologically strong product will help its cause. However, how it tackles competition from stronger and much more-funded players such as Roposo and Voonik is a question whose answer only time will tell.