SmartvizX Is Gamifying Everything To Make VR An Affordable Tech

SmartvizX Is Gamifying Everything To Make VR An Affordable Tech 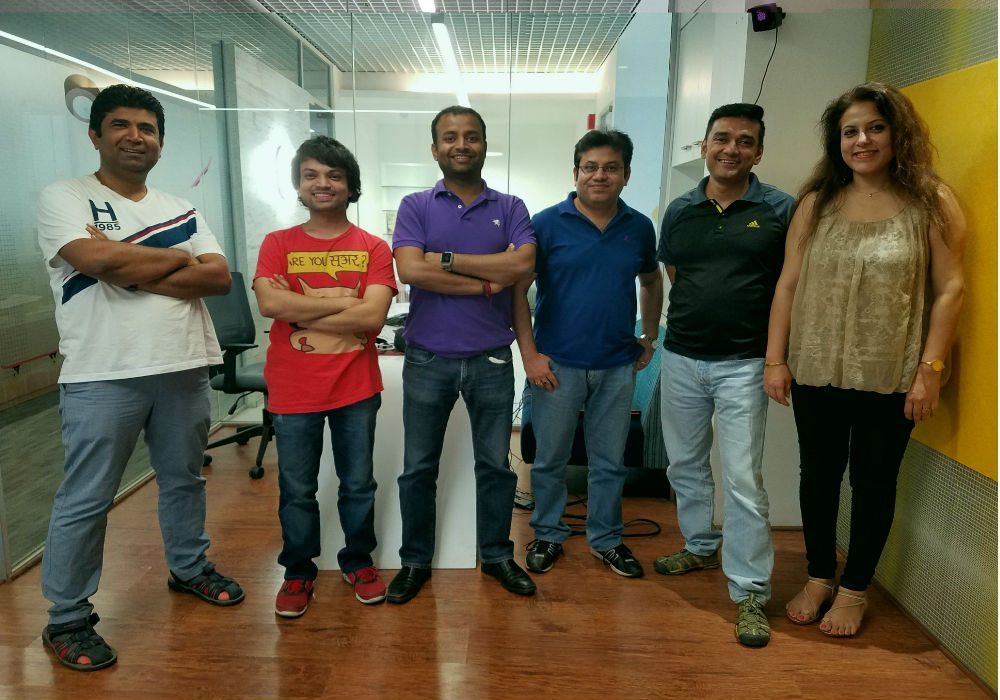 Imagine a world where everything is defined with personal experiences simulated in virtual environments; where two dimensional text and videos get obsolete; and a place where the thin line between virtual and real gets almost invisible. Worldwide, there are many players who are trying to disrupt this power that virtual reality offers. One such startup is Noida-based SmartvizX working with an aim to transform the world, and to make this technology a part of everyone’s day to day life.

Backed by IAN and SAE India, SmartvizX was launched by Gautam Tiwari and Tithi Tiwari in February 2015. It aims to create enterprise solutions with the help of game-tech, thereby helping buyers buy better, sellers sell better and businesses perform better.

The Journey So Far

Tithi, while remembering the initial days of their venture, said, “One of the things we were always struggling as architects was field of visualisation. So, we thought that if we provide a solution that is immersive, engaging and interactive; our clients, will start figuring out things faster and solutions will start getting more quality oriented.”

However, how to execute it was again a big question in front of them. So, they began by exploring the market and talking to people. They wanted to understand how interactivity, control and engagement can be brought into this technology.

“In our quest, we met some gaming professionals who not only got super excited with the idea, but also got amused with the thought of what this technology can bring on board,” said Gautam.

Game technology, thus, got merged with architectural design visualisation and from there virtual reality was a natural progression for Smartvizx.

This was the time when there was a lot of talk around it. Oculus Rift got bought for $2 Bn by Facebook, there was talk about Microsoft Holo Sense and HTC Vibe being released, there was talk around Magic Leap, which was being heavily invested in. As Gautam said, “A lot of these things came to the table, we picked up a few and realised that virtual reality in gaming, bringing that to architectural design will really be the solution for this.”

Initially, the company planned to remain bootstrapped and to be in product developing mode for the next 12 months. However, as they went out in the market in May with the proof of concept, the excitement climbed up so high that they decided to monetise it, and started taking a service based approach.

The Core: To Make VR Customisable And Affordable

Coming with 30 years of experience in architecture in between two of them, it was obvious for Gautam and Tithi to start with the Architecture, Engineering and Construction (AEC) industry. The company created B2B cross-platform tools which would enable users to immerse themselves in the environment they are engaging with. For instance, if a user is going to purchase a flat, instead of imagining it from a brochure, he can have a virtual tour himself and take a more informed decision. It will allow a user to change even the floor and wall layouts.

“The whole idea was to get rid of static images and vague imagination and make the process of buying a house a more immersive and transparent experience for the buyers. So, the whole struggle of playing it blind can be changed,” said Gautam.

The clients are provided with customised and optimised solutions depending upon their interest areas, how tech savvy they are, and spending budget. Currently, they are targeting consumers through builders, selling tools to them and letting them make end users use that tool. “We are in this technology to make it affordable as it is largely seen as a technology which is unaffordable,” added Tithi.

The Innovation At SmartvizX: An Inside Peek

As said by Raj Thadani, VP, product and strategy, at SmartvizX, “At present, games just have an entertainment drive. There is no product information. But if I give that game engine a database that will go inside our engine, it create a 3D immersive experience and the output would be a virtual reality walk through, a virtual reality marketplace, a virtual reality collaboration that can work online.”

With Archviz, one can get a full-blown tour of real estate, wherein a user can get completely immersed in the solution by wearing an HMD (Head-Mounted Device). Viviz on the other hand is a web-based solution which caters to the low speed Internet connectivity issues in the country.

“Here for the first time ever we are creating sort of a possibility to list or host a real estate related information in a dynamic manner. If you go to current listing companies website, you see two dimensional plans, nice looking png or jpeg, etc. What we are providing is that you move the entire gated community, see the amenity, walk up the tower, walk up the floor, see the final thing visually right in front of you and then take decision.”

Here are a few screen shots of Archviz and Viviz products from a Project Westwind. A virtual tour of a property can be seen here.

Codew is a sort of virtual meeting conference tool, basically a collaborative design workspace, and is still in development phase. Using it, say, a company with teams in the US and India can collaborate on a project virtually. The application will save production time as well as costs incurred, thereby making deliveries faster.

It is further positioning itself as an hardware agnostic company. This means that it is creating content that can be viewed, offline, online, with HMD devices across different companies, and on either of laptop, mobile or web.

“Eventually this will all be running on HMD only as HMDs are going to become more web focused and user focused. So from now till next two to three years, till that transition happens and HMDs evolve further, our content will run everywhere. It will be interactive, immersive and engaging, the way you want to buy it and the way you want to sell it,” said Gautam.

The Best Thing Done: To Build A Great Team

During this journey, the founders realised that there is no entry barrier in the space of VR. The technology works on open source codes, and anybody could replicate concepts and innovate further. This made them realised the need of senior talent in the company and thus the need to raise funds.

They raised over $500K from the Indian Angel Network (IAN) and Stanford Angels & Entrepreneurs India (SA&E India). The round was led by Saurabh Srivastava (Founder, IAN), Mohit Goyal (Founding Member & Director, IAN) and Ajay Lavakare (Co-president of Stanford Angels & Entrepreneurs India). With this, Ajay Lavakare also joined the board of SmartVizX.

Post funding, they set their R&D team, moving in people from VR research team of Samsung. They got people who have worked on games like Batman Arkham, and who have done coding for multi-level games.

For instance, Raj have been in the gaming industry for 15 years. He was earlier working with a company called GSN, which is into social mobile games. He says, “I came here to go beyond something that a non-gamer will get an added value from. There are many games doing virtual reality, but there are not many products that are doing gaming with virtual reality. When I met Gautam, the best thing I found about Smartvizx was that they were gamifying everything. So, instead of just creating a game where a person just plays (which we were already doing), we are giving you real life scenarios.”

“It’s kind of a big jump to have come to a startup like ours, but they have that vision, and have got that belief that we are on to something big. I think the biggest thing that we have been able to do in the last 12 months is put the right team together,” said Gautam.

The Pitfalls And The Road Ahead

At the beginning of any venture, the most important part is to carry it to people and make them believe and invest in you. Surprisingly, this was not a hurdle for Smartvizx founders. Although, there were minor acceptance issues (and still are).

According to Gautam, the biggest challenge was making people unlearn what they have seen in virtual reality in the past and make them show the real value of what SmartvizX is trying to do. “My pitch to them always is first use this, see how it works for you, and then you decide whether it’s the same thing or not,” he added.

With 12+ clients like Quikr, PNB Metlife, and Developer Group (in India) and Rockworth in Hong Kong and revenue of more than INR 2 crores, this one-year-old startup has come a long way since its inception. “Last year we ended the number with INR 1.8 crores, and this was when we were having no sales target at all. We have already booked orders of INR 3+ crores in Q1 of this financial year, because our process of delivery has become that much easy,” said Gautam.

At present, its sales are happening out of The US, Dubai, Delhi/NCR, Bangalore, and more regions in South Asia.

In the next twelve months, the company will be launching its B2C model, wherein people can use their technology on a subscription based model. This will allow consumers to reach SmartvizX directly to get solution to their real estate issues.

As Gautam said, “In coming future, we will definitely become a full blown VR player. As of now, we are focusing on AEC because both the founders are from that fraternity. But next plans are to put serious efforts on education, tourism, healthcare, and gaming space. As the technology becomes more mainstream, my personal belief is that mobiles will become virtual devices themselves.”

Bangalore-based design startup Furdo is applying virtual reality to enable users chose decor and visualise changes and get that exact décor done physically. Than there is Infurnia, which provides virtualisation technologies to furniture companies, helping users reconstruct their rooms, while experimenting on different interior looks. Another similar startup is Houssup, an end-to-end interior decor solutions platform. It provides users an immersive 360-degree design demonstration before its implementation which will help the customers in visualising how each of the chosen patterns will look in reality.

In India, however, majority of the startups are presently innovating in the hardware and augmented reality (AR) space. Absentia, Virtual Mirror, Retina, Ghar360, Gamooz, Imaginate, Realise, Ingage are some of the other players working in this space.

Internationally, there is  vTime, the first virtual reality social network from Starship, launched on Google Cardboard, that allow users to hang out with their friends in an artificial environment. In healthcare, a virtual reality application Arachnophobia has been created to help people overcome “irrational fears” of spiders.

VR has come a long way since the term got coined in the late 80s, mesmerised people in 90s films like Matrix and got considered as the legacy of gamers. It is now finding real applications, touching various aspects in people’s daily lives.

As per Digi-Capital’s ‘Augmented/Virtual Reality Report 2015, the AR/VR industry is expected to reach a global valuation of $150 Bn by 2020, through the development of both hardware and software. Another report by SuperData Research estimates that the VR gaming market itself is worth $5.1 Bn with a customer base of 55.8 Mn in 2016.

Since India is a price sensitive market and slowly takes in a new technology, educating users and businesses to make use of this technology to the best of their advantage would be difficult. However, with players like SmartVizx, Absentia, Furdo putting in serious efforts, it won’t take much time left in transforming our imagination to reality.