Ladies, Be Safe Yet Chic With This Smart Safety Wearable From Leaf Wearables

Ladies, Be Safe Yet Chic With This Smart Safety Wearable From Leaf Wearables 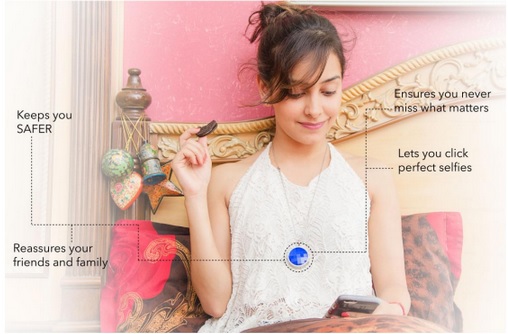 Someone has rightly said that, “Safety never takes a holiday.” And it could probably be the same person who also concurred that, “Danger never takes a vacation.” Especially in a country like India, where the incidents of crime against women have been on a rise. This was the very same thought in the mind of Paras Batra in March 2014 when he happened to be a resident of Munirka in Delhi at the time, as a student at IIT-Delhi.

Munirka had also been the scene of the horrific Delhi gang rape case and Paras realized that how shady and unsafe the place seemed. He with his colleagues Avinash Bansal, Chiraag Kapil, Ayush Banka and Manik Mehta decided to do something about the issue, given the fact that their first project of building solar Wi-fi routers had failed to receive regulatory approval from the NDMC. The team started ideating, and identified the gaps in the existing safety devices.

There were devices like the pepper spray, but they could well be used against the victim. Also, in windy or rainy weather, a pepper spray would prove ineffective. Similarly, there were a host of safety apps launched to combat safety issues, but they were highly impractical as where would one get the time to activate an app on the phone in the event of an attack. They searched for other high end devices available in the market but either they were too costly or cumbersome.

It was then the team hit upon the idea of developing a safety device which one could wear on his body. Not only would that be more practical, but also more useful in event of an attack. The team decided to incorporate the device into something that people would wear. And for women, jewellery became an obvious choice. Thus was born Safer, a pendant incorporated with a panic button, paired to one’s phones and those of his guardians’, which would make commuting and going out in general a safer affair for women. The team developed the R&D technology from scratch, incorporating their company as Leaf Wearables. 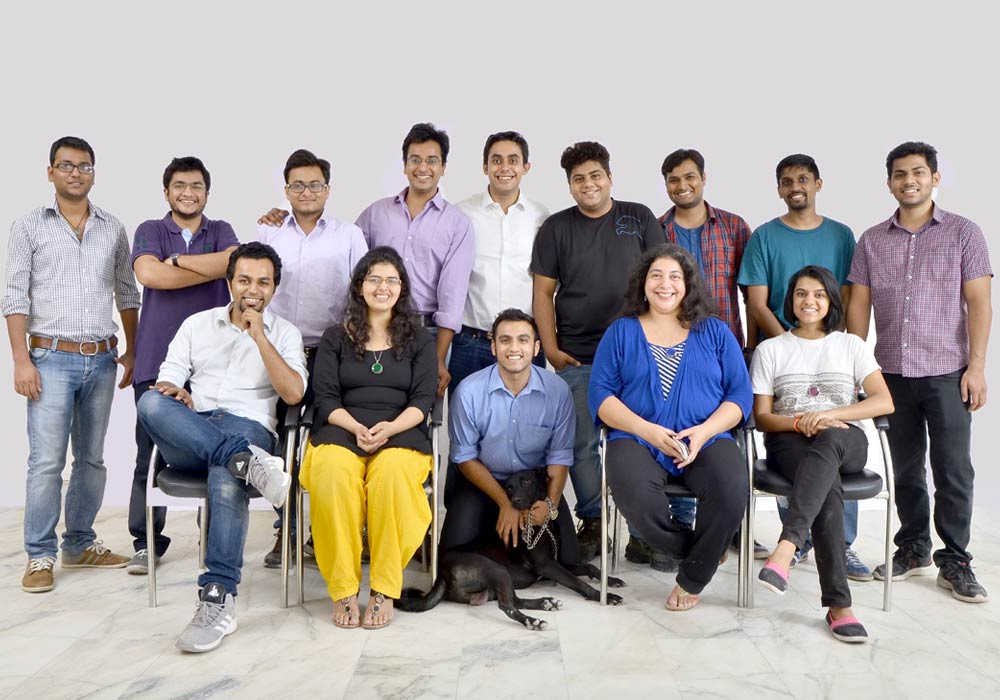 ‘Safer’ is  fashioned in the form of a pendant made of rust-proof and non-corrosive metal casing, with a fashionable coloured stone that has the safety mechanism beneath it. When a user buys the pendant, he needs to download the app, sync it with the jewellery, and then add guardians or people one would like to reach out in distress situations. 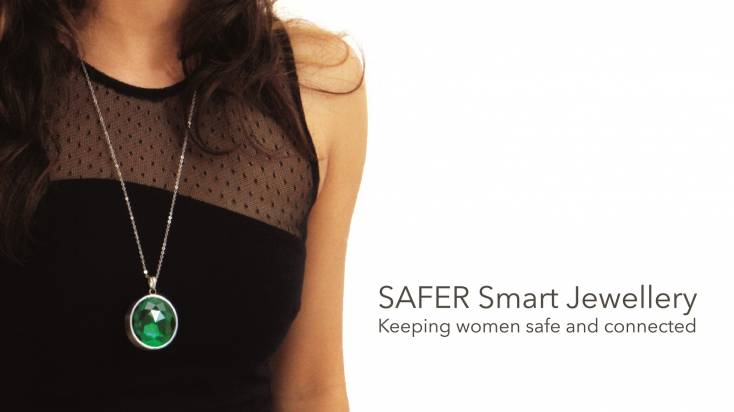 In order to send a distress signal in case of emergencies or when the user is feeling unsafe, the user needs to double click on the pendant. The device works on the push button technology hence, the chip embedded in the pendant will get activated. This will send out an automated alert to the registered numbers of the user’s guardians or friends, to the nearest PCR and the people in the vicinity who are using the same application, after a brief 30 seconds gap. The recipients will able to track the user’s location using GPS.

This ‘gap’ has been programmed in to stop a false call, just in case the jewellery has been accidentally set off. In such cases, the wearer can disable the request and the guardians will receive the message that the wearer is safe. The app taps nearby cell towers and Wi-Fi routers in addition to the Global Positioning System (GPS) to track and locate users. In case there is no app or no internet connection, the alert is sent via SMSes. The good thing in the app is- it constantly live tracks the wearer and even in areas with limited internet connection, the alerts don’t stop. Basically, the device can use any type of communication system such as internet or SMS to alert one’s loved ones when in a distress situation. 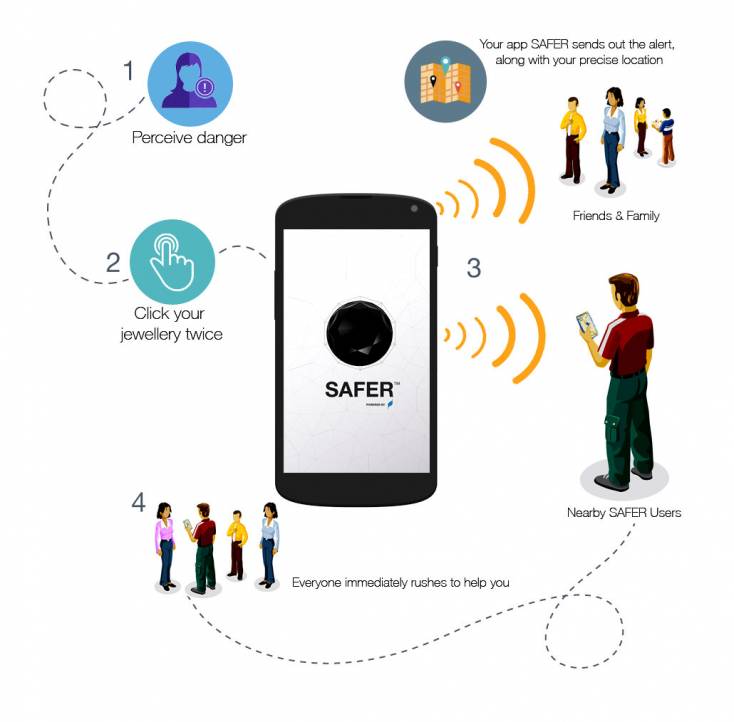 Another smart feature of the smart jewellery is the Saferwalk which allows one’s guardians to monitor one’s journey. In this case, a destination has to be entered and then the user’s selected guardian can track him reaching his destination in real-time. Once the person gets there safely, live tracking is disabled. Additionally, the device also has sound notifications, which ensures no important call or message is missed. It also sends a reminder via the phone, if the user forgets to wear the device or forgets to carry the phone. The device also has a feature which enables users to click selfies- a feature which Paras says was put in purely for engagement.

Safer is available in black, blue and green colours and is splash resistant and rust-proof. It can be charged with any micro USB and it takes only 15 minutes to charge while the battery lasts for more than 7 days. Also, Leaf Wearables provides a 1 year replacement warranty with Safer. 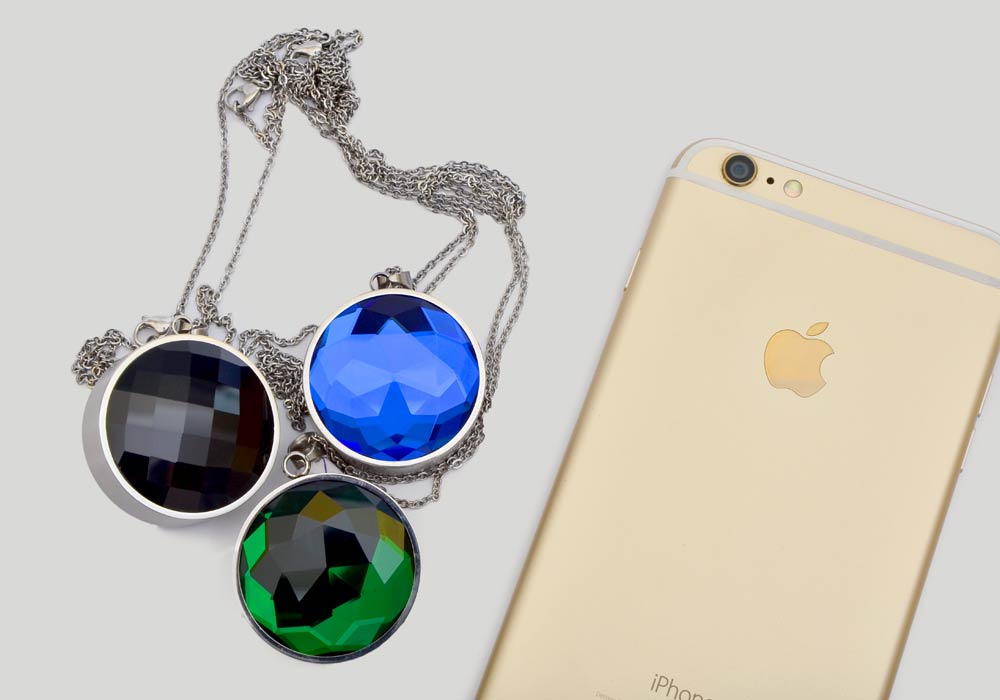 While the R&D for the device has been done completely in Delhi, the components to produce it have been sourced from a lot global locations, with the final assembly happening in India.

Currently, as the technology is fashioned in the form of jewellery, it is targeting women in urban India who would want to feel safe while stepping out of the house and keep their family updated about their whereabouts. Going further, Leaf Wearables will also venture into making safe wearable technology for kids and elderly people. The idea is to enable the wearer help in distress situations, be it women or kids or elders.

Given the smart nature of its technology, Leaf Wearables has been able to attract attention of quite a few investors. The device has brought the group awards at various national and international business and technology competitions such as the Gitex Technology Week in Dubai, where the money won by them enabled them to improvise the technology further. Besides that, they also won the Ericsson Innovation Awards 2015 and snapped up a prize of $15k (INR10 lac). The team also raised another $15k (INR 10 lac) from Mumbai Angels at the ’10-Minute Million’ organized by the entrepreneurship cell (E-cell) of IIT-Bombay. They also raised crowd funding to the tune of $7,682 (INR5 lac) by raising funds through the Ketto platform. The company offered the pendants at discount provided the user made the payment upfront, with shipping of the product to commence in November. As a result of the campaign, the startup has received pre-orders numbering to 150.

As the company goes into production and starts fulfilling the pre-orders received, it is looking to raise another funding round of $500,000. As of now, Safer pendants are priced at $54 (INR 3,500) while those on pre-ordered necklaces were priced at $41 (INR 2,700). Paras says the firm is targeting to make 1 Mn families safe by December 2017, by when it would have also rolled out the safe wearable products aimed at teens and elderly people.

In past few months, a lot of mobile apps and other devices have been launched to make women feel safe in India, but none of them have caught as much because either they are impractical or too cumbersome. Come to think of it, panic button devices are not entirely a new concept, though in India though Safer does have a first mover advantage given not many such devices are affordable to the general public at large.

Given the impractical and cumbersome nature of other safety devices in the market, Safer seems to have scored with the ease with which one can send signal for help using the device. The plus point is that it can override the problem of patchy internet network in India. While it remains to be seen how responsive will the police be in order for it be a completely effective response ecosystem, one can’t deny the importance of that one alert to the family and friends and the Safer community which could be a life saver in dire situations. The necklace might be a bit obtrusive, but then, it is definitely better than not having any safety mechanism in place. Someone has rightly said, “Safety means first aid to the uninjured” and this is where Safer scores.

You can order the device here.