Delhi, currently, has a population of around 18.2 Mn, making it the second most populous city in the world after Tokyo. The city has been experiencing an explosive population growth that it might not be able to sustain in the long run. This can be seen being reflected on the crowded Delhi streets. People who rely on the public transport systems for their commute are the worst affected; not even the extremely efficient Delhi Metro could save them from commuting like a swarm of ants. All degrees of personal space have to be forfeited for travelling in a public transport system. However, there are startups like Shuttl that care about saving the personal space of the common everyday commuters who don’t own their personal conveyance and can’t afford cabs and autos on a daily basis.

Gurgaon-based Shuttl offers economic and comfortable shuttle services to commuters across 20 routes in Gurgaon and Noida. “We exist to take the pain away from the daily commute and bring dignity back in the way we commute. Buses being the most space efficient and cost efficient way of moving people within cities were the obvious choice,” said Amit Singh, co-founder of Shuttl.

“We try to dig deep into the problems of our target segment and solve the problem by first principles. So far, we’ve done well by building a credible alternative which is comfortable, predictable and affordable,” he added.

Consumers have to first register themselves on the Shuttl app, select the origin, destination and the time of travel. The app then displays all the approaching shuttles at their point of boarding. They can book their seats on the shuttle by cashless payment though their accounts – the accounts can be recharged online.

All the buses on Shuttl’s platform are air-conditioned and GPS-enabled. “We’re building a tech enabled marketplace for AC buses. What we see is that these buses are under-utilized as they are locked to their use case be it school or corporate. We’re offering them a plug-and-ply platform which helps in cross utilization of these buses across complementary uses cases. We’re also encouraging drivers to become micro entrepreneurs and hence generating employment,” explains Amit. 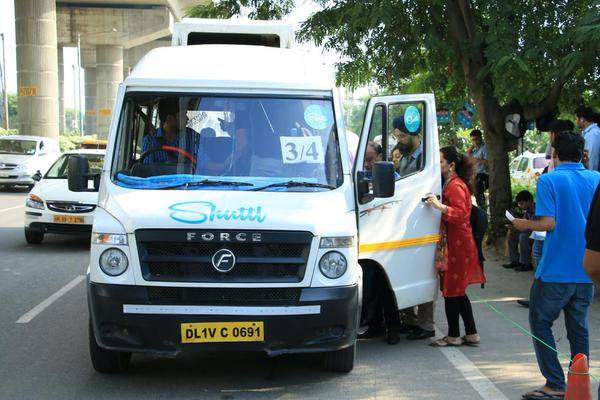 The company also ensures that their drivers are thoroughly verified. It has an exhaustive background check and verification process in place before onboarding the drivers. Its referral program also helps in filtering through its existing driver network. The drivers undergo a three-tiered training programme covering behavioral, app/technical and route-related training.  In addition, there is an instant feedback mechanism in its app which allows it to understand the customer experience and evolve the process accordingly.

The startup claims that women safety is a key priority for it and has left no stone unturned to ensure the same. 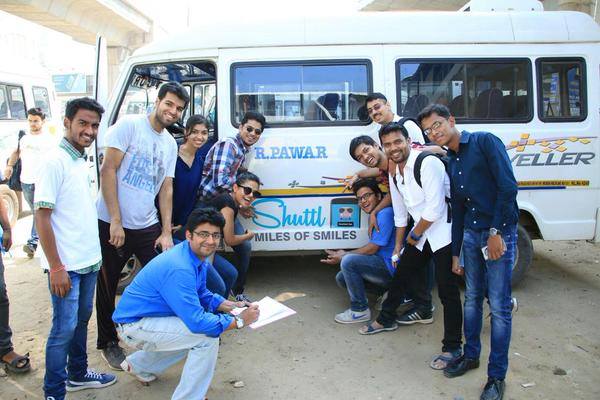 Shuttl was founded in April this year by Amit and Deepanshu Malviya. It’s app has reached 50,000 downloads on Google Play and is currently undertaking over 10,000 rides per day – its growing 30% week-on-week.

Although, currently, the startup is  plying on the growth route, the ride till here was not all that smooth. It faced challenges right from building the technology, supply, operations to educating customers. “We have tackled all that without compromising on speed. The challenges continue and being the first ones in this field, we often need to look inwards for solutions. The key was to build the right team and empower our people. We have gone an extra mile to get this right,” averred Amit.

Shuttl has raised funding from Sequoia Capital and a few other renowned angel investors earlier this year. It claims to be receiving a lot of inbound investor interest.

The startup is working closely with the authorities to provide urban mobility solution. It’s also working with the Gurgaon Traffic Police towards the success of the Car Free Day initiative. The startup has also tied up with Rapid Metro to provide last mile connectivity to its commuters.

Amit believes that the NCR market is quite huge, hence, plans to focus on it for the next couple of months. It also aims to expand its operations to other cities towards the end of this calendar year, and hopes to undertake 100,000 rides a day within the next 12 months.

The Hustle And Bustle Of The Shuttles

Indian bus service market is slowly emerging to be a major competitor for the Indian taxi market which is pegged at around $9 Bn. Sensing the growth potential, of late, many players such as rBus, ZipGo and Cityflo have recently entered this segment.

rBus operates in Mumbai and charges INR 500 for 10 rides a week. It has partnered with various chartered bus operators to source the vehicles. Bangalore-based ZipGo is backed by Orios Venture Partners and CityFlo might raise its maiden funding from Nexus Venture and IDG Ventures.

Ola too is planning to launch it shuttle service called Ola Shuttle to provide rides under $1 (INR 66). The shuttles will come equipped with features such as WiFi access, air conditioning and in-vehicle entertainment. It plans to pump $50 Mn into this new service.

The shuttle aggregation model is picking up pace globally as well. On-demand transit system, Via, offers urban shuttle service in Manhattan and USA. It takes multiple passengers heading in the same direction and books them into a shared vehicle. The cab aggregator titan of China, Didi Kuaidi, launched its shuttle service in July. After raising $2 Bn in July, completed a $3 Bn fundraising round last month. It has also invested in Ola, last month, reportedly in the amount of $30 Mn.

On-demand shuttle services are picking up pace fast and might just prove to be the next disruptor in the intra-city transportation market after the advent of radio taxis. Car-pooling services are also a viable solution to the commuters’ woes, but the limited seating capabilities of a car might give the shuttle services a slight edge over them. Buses are spacious and can cater to many commuters in a single ride.

In Delhi, the app-based taxi hailing services Ola and Uber are facing a tough time with the state government, which keeps rejecting their licenses for not adhering with the provisions of the recently amended Radio Taxi Scheme of 2006. Working closely with the Delhi Transport Department can prove to be really helpful for the Delhi NCR-based shuttle services and others planning to enter this market. Sourcing the buses, ensuring smooth operations, covering new routes and providing safe and economical service are imperative for these shuttle aggregators to succeed.