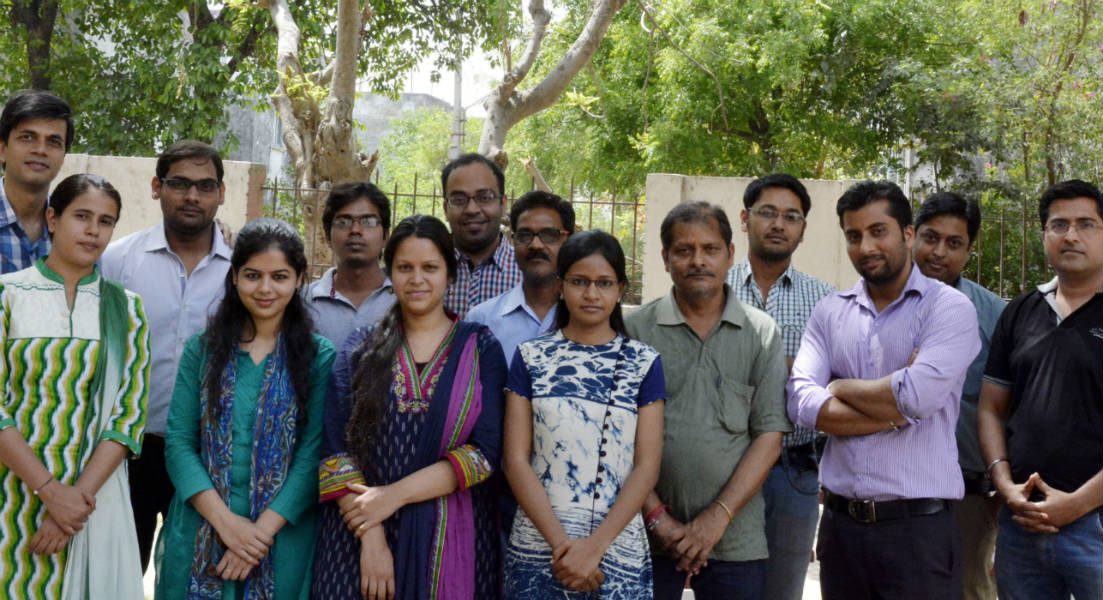 This morning when I booked a cab through Ola, I couldn’t help notice that the driver was using a Hindi app interface (instead of the regular English one). The sense of ease on his face was unmistakable and quite identifiable. And this wasn’t the only time I found this. They have been given the Hindi interface out of sheer necessity. But there are millions of Hindi speakers (with no or limited knowledge in English) who would like to be on the Internet. Unfortunately, there weren’t many options till a few years ago. IIT Mumbai alumnus Amitesh Mishra, along with his friends Kalpnesh Gupta and Nikhil Tiwari, chose to channel their startup aspirations in creating one such option for the unprivileged majority.

The trio launched Shabda Nagari, one of the first Hindi social networking portal in India, in January 2015. It is one of the prominent startups that is working on the upliftment of Hindi on the Internet. Kalpnesh says that the company was founded in alignment with Prime Minister Narendra Modi’s Digital India visions.

Vernacular social network is something that might not affect a lot of us directly. But there are a lot of people who would prefer vernacular sites for purposes related to education, entertainment or socialising. And true equality will come only when these people are at par with what we, the English-educated folks, have at our disposal.

What is Shabda Nagari?

Perhaps Kalpnesh defines Shabda Nagari in the best possible way. He says, “Shabda Nagari is a combination of the services provided by Facebook, Twitter, Quora and blogging, but all in Hindi.” So, essentially a user can read news, make friends, and write & discuss on topics. It has a predictive text typing mechanism through which one can use an English keyboard to type Hindi words.

A 25-strong team sits out of an office at IIT Kanpur where it is currently incubated. Kalpnesh says, “In 2014 when we were planning to start up, we found that there’s an acute shortage of Hindi content in India. There were two English pages per person compared to just one Hindi page per 50,000 people. This matters a lot in a country like India where Hindi is spoken by about 41% of the total population. So, we launched a beta version in the third quarter of 2014. After having a successful pilot, we launched a developed version in January 2015. ”

The company claims to publish more than 100 articles everyday, with 1.75-2 lakhs unique visitors per month. Kalpnesh says, “We register 7-8 lakhs page visits every month, 25% of which accounts for repeat traffic.”

“With Shabda Nagari, the startup  wants to bring together Hindi speakers online where they can connect with like minded people and express their thoughts in their language. In the online space today, Hindi doesn’t feature in even top 10 languages despite being one of most popular languages. We have a goal of bridging this digital divide,” adds Kalpnesh.

Kalpnesh claims that there are more than 21,000 registered users on the platform, 70% of which comes from mobile. The Android app has 2000+ downloads. Kalpnesh says, “We are aiming for a 1000% growth in the next 6-9 months. Once we reach 100,000 regular users, the growth will be organic.

For now, our marketing strategy will include online outreach in tier II and tier III cities, tie up with government agencies, conduct offline workshops, etc.” The company is in talks with some smartphone manufacturers to have their app built in on their products. Kalpnesh adds, “Once we establish a strong foothold in the Hindi market, we will start services in other vernaculars.”

Earlier this year, the company raised $2,00,000 from Kanpur Angels and a clutch of other investors. The funds raised will be used to expand genres on the site and upgrade user interface.

Rakesh Suri of Kanpur Angels says, “With an increasing smartphone penetration in the hinterland, there is a demand for new and original local language content on the Internet. Currently, many large companies are working towards ensuring that the next 100 Mnmillion users on the iInternet should be able to engage in their local languages. We believe Shabda Nagari is equipped to facilitate that with their vision to create a Hindi Internet.”

The startup will initially have an ad-based revenue model. Alongside, the company is planning to pilot a marketplace model on the website around May. Through this marketplace, Shabda Nagari users can buy and sell books.

It’s necessary to cite some facts and figures to put things into context.

A 2015 study by industry body Internet and Mobile Association of India (IAMAI) and marketing research firm IMRB International said that the number of Internet users in India is expected to surpass 402 Mn by December 2015. The number is expected to surge to 452 Mn by June this year. It also mentioned that the number of local language internet users in India is growing at 47% year-on-year and had touched 127 Mn in June 2015.

According to a recent survey, Hindi Internet users will soon reach the 60 Mn mark. This only proves that the Hindi Internet market is growing and a lot remains to be tapped. Quite expectedly, the aforementioned study said that availability of content in regional languages can boost Internet growth in India by 24%. So, it can be said that Shabda Nagari has set out on the right path, but there are some intrinsic and extrinsic challenges that the company will face.

With the sudden growth in computer and Internet literacy, there will be an urgent demand for vernacular content, especially for first time users from rural India. Tech giants like Google, Twitter and Facebook realised this demand at the right time. Twitter and Facebook rolled out its Hindi language support in 2011, while Google got there early by launching its Hindi portal in 2009. Even visual discovery platform Pinterest unveiled its Hindi language support in 2014. And this is just the tip of the iceberg.

Local languages will clearly drive internet growth in rural areas. The study found that the local language usage penetration among the active internet users is around 42 per cent.

A 2014 research by Mindshift Interactive found that 64% of rural users use the Internet in their local languages, and that vernacular sites were witnessing a yearly growth of 56%, whereas English sites were growing by just 11%. Only last month, Department of Telecom announced that it will soon formulate regulations that will make local language support on mobile phones mandatory.

Overall, with the penetration of Internet, emergence of Hindi social networks and such regulations, the demand for Hindi content will shoot up. News and content discovery websites like Oneindia.in and Raftaar.in have made significant progress in this aspect. But, a lot is left to be achieved.

Despite the huge opportunity, there’s a small but significant challenge faced by the promoters of vernaculars. After years of online dominance, English has inevitably seeped into mainstream usage in varying degrees. People are gradually becoming more comfortable using the language during their everyday conversations. So, Shabda Nagari and the likes are handed over the additional task of putting forth Hindi in such a manner that people are not alienated.

It’s only logical to say that vernacular content (particularly Hindi) on the Internet is more of a need than a want. It will play a major role in elevating literacy rate and general awareness amongst first time Internet users. Since this is a largely untapped market, all the tech giants will be putting their best feet forward to grab the lion’s share. And, of course, there would be a lot of small players who will target consumers with their niche offerings. In such a situation, it can be said that Shabda Nagari has played safe and intelligently in incorporating multiple features on the platform; consumers will get the best value for their time and effort. It also means that the startup has to make those features distinctive. Although, Shabda Nagari’s biggest responsibility would be to understand the pulse of the Hindi speaking mass and deliver sensible content to them, in order to bolster the Government’s vision of building a truly digital and connected nation and, if I may add, a tolerant nation too.