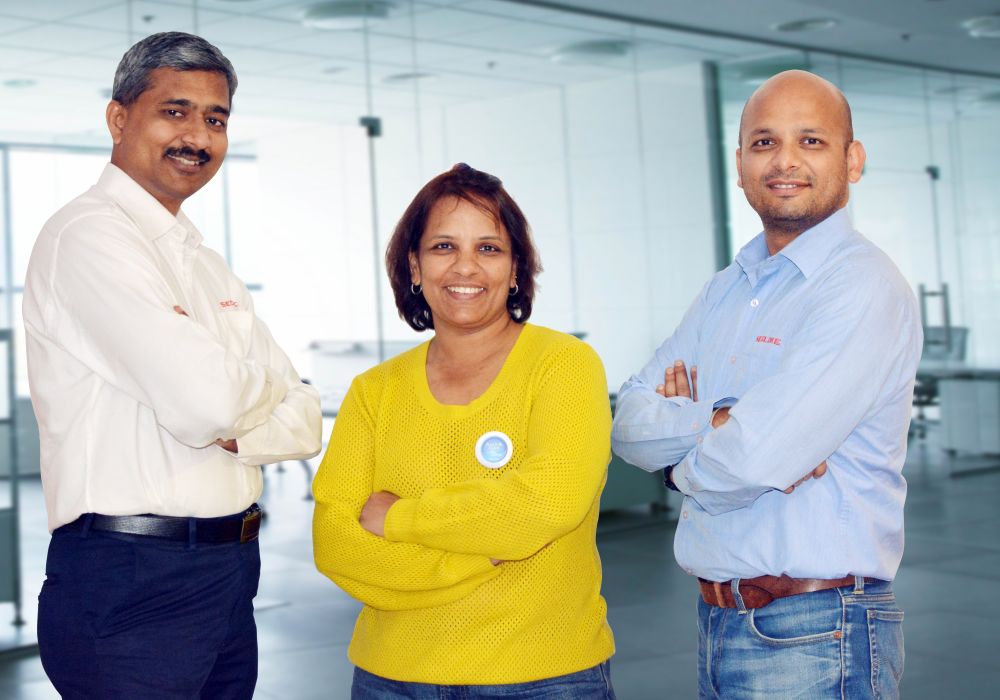 Vishal Gupta’s entrepreneurial journey is unique and ubiquitous all at the same time – it began with engineering.

He was a fourth-year engineering student at IIT Bombay and for the last year project, he was part of a team that wrote the IP (intellectual property) for Seclore – the startup associated with security and information protection since 2010.

“IIT-B has a SINE programme, which is an in-house incubation programme for projects that the college deems worthy of being turned into a viable business,” begins Vishal.

“It was started about 15 years ago and recognises technology produced by the students which can become commercially feasible and goes to the extent of setting up the company inside the campus. That’s where Seclore started, inside IIT Bombay,” reminisces Vishal.

According to Vishal, IIT-B SINE has helped jumpstart the foundation of at least 75 startups in Mumbai over the last 15 years, if not more. And during this particular project, Abhijit Tannu, the other co-founder of Seclore came onboard. He also mentions the very first Seed round that was invested by “friends, families, and well wishers” in 2009 in the company.

“But Seclore formally began when we transitioned from the project and into a full-fledged bootstrapped company,” he adds.

From a Generic Product To Narrowing Down Focus

“The main pain point we were trying to solve when we started off was that security processes in outsourcing were not enough. Outsourcing happens across disciplines such as payroll, customer relationship management (CRM), document-sharing etc. Companies share a lot of confidential information and are concerned about breaches, privacy and security. We identified that banks and utility companies as our target markets,” says Vishal.

He goes on to add that these companies have core areas which are data-sensitive which they do not outsource to third-parties but others, which require data inputting and automation. Security in cases such as these also means that a team has to be in place in order to ensure compliance – with all the fallacies that come with being a human being.

“We built out a generic product in our first year which was applicable and working in controlling these areas,” he says.

“But when we went deeper into the field of outsourcing and maintaining security therein, we realised that our focus was very limited. So we changed our focus and built Seclore as it is today – a platform that ensures complete security and protection of data and confidential information during third-party external collaborations of our customers.”

As per Vishal they spent the first one year just building the product, beta testing it out and confirming their hypothesis – what started out as a college grade project could actually become a business. “While we started operations in 2010, the GA release of the product happened in 2011,” says Vishal.

Securing Data: One Document, One File At A Time

Seclore’s original platform had a data-protecting platform that worked on giving complete control to the sender and access to the external collaborator with whom the data is shared/outsourced. This data could be in the form of legal documents, other documents, simple data such as user information and more.

He explains it with this analogy:

“The idea is to control outgoing information remotely without worrying about accessibility issues. Before products like ours existed, the creator of a particular document, say you, the writer of this article had to consciously put a privacy process in place when you sent it to me, the external collaborator. Now I can edit this document, copy it and do what I want with it if you’d not password protected it or something. In simplest terms, with Seclore, if you don’t like me anymore and don’t want me having access to this document or data, all you have to do is press a button and I won’t be able to access it anymore.”

Simple as it sounds, the underlying ethos behind the product lies in the system integration of AI technology and human intelligence that figures out ‘information sensitivity,’ while eliminating the human element and inherent errors that come with it. Thus, the need for educating large numbers of employees, (numbers increase or decrease depending upon attrition) is also negated by automating this process. “This means efficiency in process, increase in time-saving, and most important, cost-saving for our clients,” says Vishal with a laugh.

This product has now been deployed across verticals and sectors in the core target markets that Seclore operates in – finance companies and utilities. “If year one was all about getting our product right, we spent the next year going after customers,” he says. As mentioned, Seclore counts utility companies, financial institutions (insurance companies to be particular) such as HDFC, Reliance, Kotak Mahindra, and banks among its customers, now.

According to Vishal, Seclore focussed on acquiring customers in India and the Middle East and the number stood at a respectable 65-70 when, as per Vishal, it raised a proper round of Pre-Series A funding in April 2013 from Helion Ventures and Venture East Partners. “We raised about $6 Mn then, but because we are a SaaS-based company and had a significant number of customers we were already somewhat profitable by the time we went in search of fresh funds,” he adds.

The Next 2 Years: Expansion And Creating Alliances

“We were very smart with the money we raised – it was for consolidating our dominant position here in India while we entered the US,” he says. An industry best practice amongst most startups. “This money was only raised once we established PMF and saw the use case of Seclore working everywhere we wanted it to. We also were careful in ensuring our economics and business model were sound before inviting investment,” he adds.

The careful and planned expansion paid off as the company acquired about 400 direct customers that used its products directly. “We say 400 customers directly, because by the time we raised our next round which was announced in April 2016, we had in total 800 customers in 38 countries,” shares Vishal with a touch of pride.

He further follows up this stat with mentioning that Seclore has presence in Singapore, India, Dubai, Riyadh, Amsterdam (Europe) and US East and West Coasts with a team strength of 170.

But it is the remaining 400 indirect customers that are of interest. To which Vishal replies with,

“We didn’t merely expand our presence in these geographies. With the money raised we went about creating alliances as we foresaw where the industry was headed OEM (original equipment manufacturing). Seclore turned into an OEM through our partnerships with various other companies and is now available bundled in packages which are produced by those companies. These account for the remaining 400 customers.”

Some of the companies that Seclore has created OEM alliances with are – Citrix, IBM’s Filenet – a document management system, Exxostar which supplies software to defense contractors in the US.

“This Once-Virgin Territory Has Become Hypercompetitive”

Let’s face it. Data is king in the new century. Be it consumer-related information, user profiles on social media or even information of a more-sensitive such as financial statements, tax returns or legal documents, data is everywhere and pervasive. It is also all online where the threat of a privacy breach is also significantly higher.

Back in 2010, at the beginning of the decade this threat was not so serious as the amount of cumulative data was not of gargantuan proportions. And so, the space has heated up too. “When we began Seclore to where we are today, the profile of the company has changed significantly. But this once-virgin territory has now become hypercompetitive” Vishal admits candidly.

Seclore faces competition from established legacy players like Microsoft, Ionic, and Fasoo among others. And with newer players joining in the fray and wanting a share of the data security pie, dominance is hard to establish and even harder to maintain.

“It’s very simple. We’ve maintained our lead in tech through the last six years. Our process of automation and combining AI and human intelligence, which intuitively feels for information sensitivity is at least 2-3 years ahead of what our counterparts are offering. And considering the amount of money we save for our clients, our differentiator is obvious,” he says.

Perhaps it is because of this differentiator that accounts for the growth that Seclore has reportedly seen –83% year-on-year growth in the last FY. And, according to Vishal, for the FY17 year Seclore is aiming for that number to hit 100%.

It is with no small amount of pride that Vishal says, “We became profitable twice. Once, before we raised our first formal round of funding in 2013. And again in April 2016, when we raised $12 Mn in Series B from Sistemia JSFC’s Sistemia Asia Fund.”

Since data is the need of the hour, and with so many startups rushing to fulfill it, Seclore has its task cut out if it wants to get ahead in the coming years.

“Automation will continue to be the theme and core of what we do at Seclore,” says Vishal. “But we are building out different compliances as data privacy laws and regulations keep changing across countries and continents so our product stays up-to-date.” He mentions the GDPR in Europe and the IT Act of 2008 in India as two prime examples that Seclore is trying to comply with.

“The Indian government has turned out to be a creator as well as consumer of data and privacy due to the India stack – Aadhar, UPI and demonetisation. Need for clarity, awareness and increased security has gone up exponentially. This is the need we are trying to fulfill.”

Vishal also mentions that expansion is also a key mandate in the next two-three years. “We would like to expand our geographical footprint in Asia where we are in a dominant position. And continue to build on the headway we’ve made in North America,” he concludes.

For a company that began as a college engineering project, the future looks bright indeed.

According to this MarketsandMarkets report, the cybersecurity market is expected to be worth $202 Bn by 2021, the world over. This estimate is not counting the various industries and sectors in which Seclore is active. With data becoming key to the way business is conducted and transacted, the privacy of and securing this data will play an important role in ensuring that said data does not fall into the wrong hands or is misused in any way – a common fear when it comes to the Internet.

The advantage that Seclore has enjoyed so far, being the dominant player in Asia and making headway in the global markets has also been bolstered by a sound business model that has been generating revenue from day one. But with the space exploding with ‘hypercompetitive players’ in Vishal’s own words, how Seclore secures the way forward in the industry and for its clients is a question for the future.