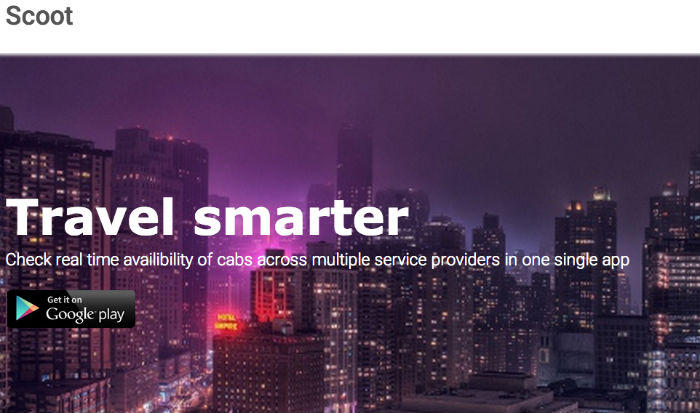 Considering the increased use of on-demand taxi services, the first thought that a user has, is to open up his smartphone and browse through various applications available on his phone. Ola, Uber or Taxiforsure? Want to book a cab but don’t want to check the availability on three different apps?

Switching from one app to another to find the best option available for a ride somewhat usually irritates a user. Understanding these pain points, two friends came up with an idea to launch Scoot as a solution to this problem. The app combines all the search results from the three cab companies and puts them on a single screen. Scoot has simplified the way in which we search for available taxi services. Bridging the gap between different taxi services, it acts as the Google for all available local cab companies.

How did this originate?

Not really surprising, but this app was developed within a time span of 7 days by Gunjan Thankuria who is an IIT Madras alumnus and has worked for Carwale and earlier started his own venture zophop.com which was a multi modal transit app combining various modes of transit. The co-founder of this app is Sagar Yarnalkar who is a graduate from BITS Goa campus. These two have simplified the cab hailing process by giving search results in real time along with all the available discounts and offers from the cab companies.

How does it fare among the rest?

Scoot is one of a kind app which lists all the available taxi services on a single page along with the estimated time of arrival and simplicity of its user interface makes it easy to use. Since there are no other apps doing similar task, Scoot is one of its kind and will always have an upper edge over its future competitors unless someone can find a better usability. With 4000 users registered in the first three weeks, Scoot App aims at getting to 10000 users within the next month. The size of the cab service in India is roughly INR 14000 crore and this venture plans on expanding it even further. 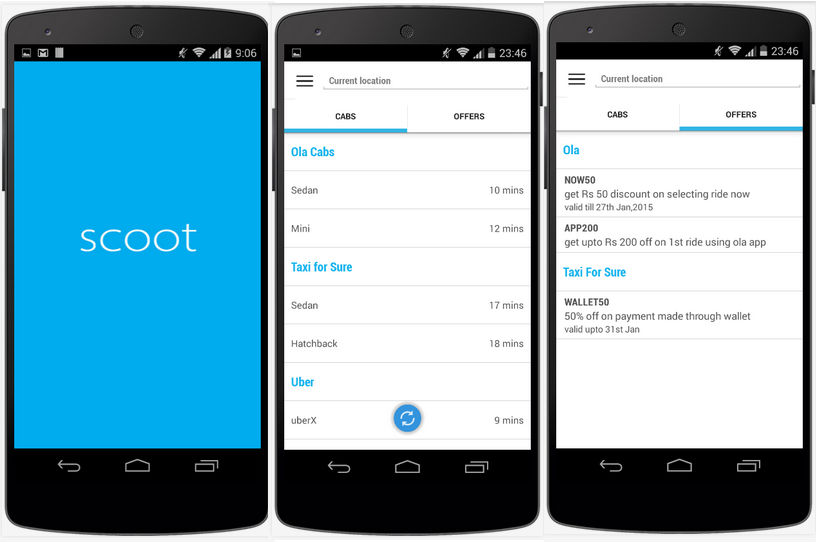 Scoot App is a not even a month old and has gained popularity due to its intelligent idea of simplifying everyday hassles. The company promises several new feature additions in the coming months and a major one could include price comparisons and new additions to the list of providers. Apart from this, an iOS application is on its way but for now, android users can benefit from the app. Apart from the current partners, Scoot is in talks with Meru Cabs to add them to the list.

Although the company presently has no plans to raise funds, but it has been approached by investors but the founders have put the thought on hold. With high aims, the company plans on taking their reach to a global level in the coming years and also plans on combining the cab services with the newly introduced carpooling ventures by acting as the aggregator app for all the services.

To sum up the startup, it simplifies the process of booking a cab and for now the startup doesn’t have a monetization model but in the long run it could do wonders. Being a consumer, this sort of simplification in the cab hailing process not only saves time and hassle of switching between different applications but also gives real time status of the bookings. With such an opening, we are looking forward to its future updates.