How Tiger Global Backed Roposo Managed To Bring 2.5 Mn Fashion Freaks Together On One Platform

IIT Delhi alumni Mayank Bhangadia, Avinash Saxena (ex-CTO of Zomato) and Kaushal Shubhank started Roposo in July 2014 in the realm of fashion discovery by creating a social platform for fashion. In a small span of time they managed to get 2.5 Mn users on-board. Now they are raring to hit the 8 Mn mark this year as the tribe of fashionistas multiply on the platform.

Interestingly, what inspired the trio was not an interest in fashion, but an intent to solve the problem of discovery, help people find stuff relevant to them. No wonder the platform has been named Roposo (derived from the French word Apropos, which means relevant/suitable).

“The most important thing about discovery is relevancy. And the best way to do that is to by replicating the real world. So, we wanted to make a platform which replicates the world around us. In the real world, your choices are influenced by influencers, travel, and things around you. And users are most active in fashion. It is something you do everyday. So, we wanted Roposo to be that place where people can come together and get inspired by others,” says Avinash. Avinash and Mayank had earlier co-founded a gifting startup called Giveter. 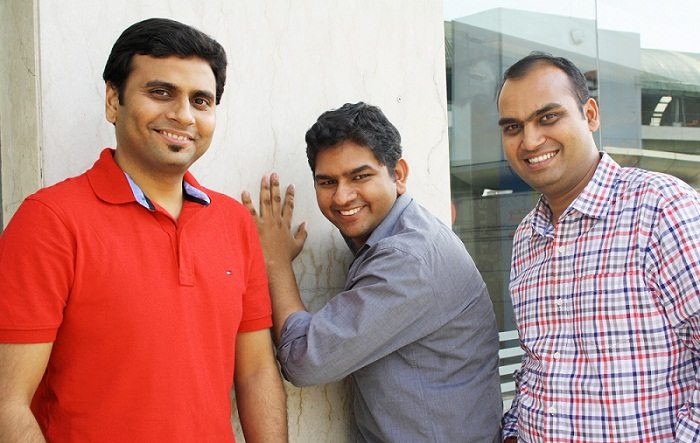 With 2.5 Mn users, more than 200 celebrities, designers and stylists on the platform, and over 6,000 brands from across 550 stores, Roposo has come a long way in cementing its position to become the favourite social destination of fashion lovers in just two years. After winning in the fashion and styling category, it has now added categories like home decor, travel, food, etc. that are bringing more and more users to the platform, transforming it into a social network for people with like-minded interests in these broad heads. No wonder, Roposo which is among India’s first fashion discovery platforms, is slowly morphing into one of India’s preferred fashion social networks!

Roposo’s traction has increased significantly with the launch of its app last year. The platform already garners over 1 Mn screen views and posts a month and has clocked 2.5 Mn app installations so far. Out of that, 1 Mn came within 4 months of the app launch.

Once a user downloads the Roposo app, he/she can share style inspirations, post pictures, DIYs, or trend stories, follow and interact with users/celebrities/designers whose styles they like, make a list of lists of stories and products for future reference, repost stories they like on the platform, and shop for new products and trends that are curated, personalised and updated every day. In short, users can socialise fashionably on this fashion social network, keeping abreast with new style trends.

Crossing the 2 Mn user mark in a year is not an easy ride. And to top it, the user generated content platform claims that the fashion stories are growing 4X every month. There are some cool things which Roposo has done, which is amplifying its ever-growing community of fashion aficionados.

The style check-in option allows users to update their location along with their fashion posts. Thus the geo-tagging enables other users to see what’s trending in which part of the country, thus keeping them in tune with styles that are in vogue.

The Near you feature will enable you to see posts which have been made by users close to your location. This way one not only knows what’s in trend near one but also gets to know of many local boutiques and businesses in fashion near one’s location. One can also easily chat with users through messages, enquire about products and prices. This will soon become live in-app chat, making it a real time fashion network of sorts. 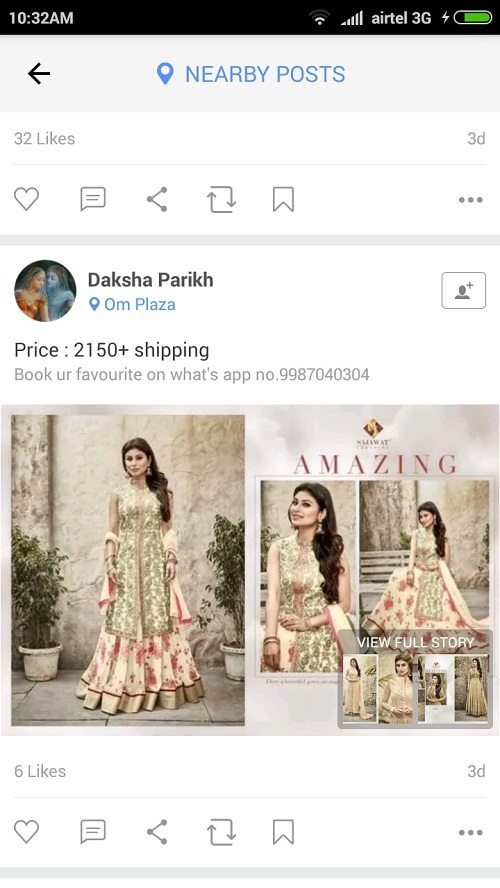 Getting celebrities like Nargis Fakhri, Sania Mirza, Jacqueline Fernandez, Rocky S and Ritu Kumar on the platform was one successful hack which has led to increased traction as fashionistas always want to be in sync with what their favourite celebrities are wearing.

To make it easy for users to find the things they like, the app fetches similar products to the ones they like, and users can easily purchase them online through Roposo.

The recent video feature allows users to create short videos on fashion, makeup, and things of their interest, thus adding another layer of deeper connectivity with the platform. Think of it as Facebook of fashion, where from posts to pictures to videos – everything is available on the platform. 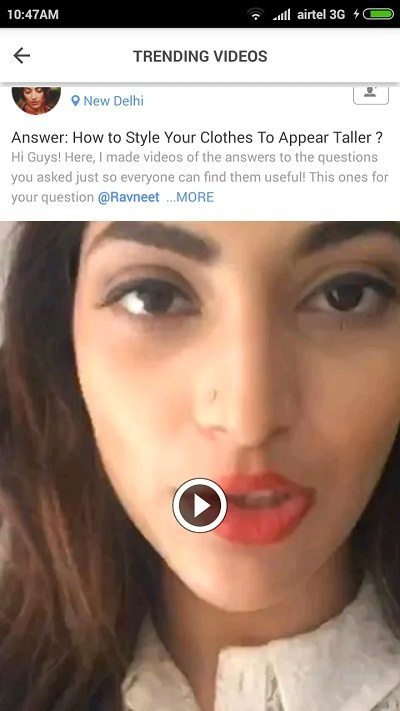 Adds Avinash, “The platform is fast turning out to be a hotspot for fashion lovers who like to discover the latest trends and flaunt their own personal style. We aim to reach out to more and more users and take the total figure to 8 Mn by the end of this fiscal. With the response that we have received from the market as well as investors, we are confident of our growth and of amplifying our user base significantly.”

Avinash’s optimism is not unjustified given the fact that to mark the completion of one year of its app, Roposo is celebrating the accomplishment and bolstering its growth with the launch of its men’s platform. The move is in line with the massive demand, both from its existing women users and from men themselves, to open up the social network to men’s fashion and could be the next significant step in Roposo’s evolution as the ultimate social destination for all fashion lovers in the country. Roposo’s men’s fashion platform is also going to map and generate content for more male-relevant interests including bikes, gadgets, cars, adventure gear, etc.

The team has also grown from the initial three to more than a 100 members spread across Gurgaon and Mumbai. Its clientele include Flipkart, Jabong, Yepme, L’Oreal, Snapdeal, Tommy Hilfiger, Biba, Colorbar, Fossil, and French Connection.

The startup monetises through the affiliate model, wherein it gets a cut for the lead generation. Given the fact that on an average, a user spends 120 minutes on the app in a month, this model has worked out for the startup to be operationally profitable, without spending much on marketing. In the pipeline are plans to explore another revenue channels – mainly advertisements, which will be finalised in the coming months.

Fashion discovery is going to be a multi-billion dollar opportunity in the coming times and it is but natural that quite a few players are already trying to make their mark. Personalised fashion discovery engine and shopping assistant Fabence, Seedfund-backed Voonik, and Amazon’s Junglee, which focuses on everything under the sun, are some of the players trying to simplify the maze around fashion discovery. Last August, Voonik acqui-hired Trialkart, a startup that gives a virtual dressing room experience to users, for an undisclosed amount. This month, it has also acqui-hired three startups, Zohraa, Picksilk.com and Styl, to build it newly launched premium ecommerce platform Vilara.

Then there is VentureNursery-backed social discovery and curation tool for ecommerce, Klip.in, which raised INR 3 Cr last year, and Bangalore-based hyperlocal discovery platform Wooplr, which raised over $5 Mn in a round led by venture capital firm Helion Ventures.

Similarly, there is Delhi-based startup Styledotme, a social networking fashion app which has raised an undisclosed amount of funding from Indian Angel Network this February. The app allows users to instantly get connected with their friends and followers and ask them to vote for the selected choices. Mumbai-based fashion ecommerce app Hippily, which has raised $250K in seed round of funding this February, also offers curated trendy fashion products, looks, and collections, especially for women to discover, shop and share from a wide variety of online stores.  It also uses software algorithms and inputs from social media to personalise the shopping experience for women. The company has tie-ups with fashion stylists to curate products.

Another Mumbai-based online fashion styling platform StyleCracker, similarly is a styling platform for people who wish to get styled by the country’s reputed and renowned designers in the fashion industry. Then there is WithMe  – a platform built around fashion inspiration and ideas that help its users decide on what to buy or wear. Users’ social community and bunch of fashion experts answer their style queries in real time.

Roposo however is unfazed by the competition. As per Avinash, there is no one single platform that can collect videos and photos, connect with products they can buy, get in touch with stylists, influencers, celebrities, and artists, and bond in interesting ways with people over style and fashion.

Says Avinash, “It is a rich, developing community and lot of people are contributing to the platform daily, helping others discover new things.” Lot of these people also conduct events in different cities such as Chandigarh, Ahmedabad, thus further connecting with people on the platform. The community is expected to deepen further with the introduction of the video feature which allows users to employ multiple short videos to tell their stories. Going further, users will be able to communicate real time via the app, which they currently do with comments right now.

As per a recent Morgan Stanley report, the Indian ecommerce market is estimated to be worth $119 Bn by 2020. Added to that, smartphone users in India are projected to reach over 500 Mn by 2018, pointing out to the huge opportunity at hand for fashion discovery startups like Roposo. Needless to say, as more and more people come online for following fashion trends and seeking fashion recommendations, fashion social networks will amplify, gaining more traction and larger number of ecommerce clients who would want to leverage their networks for boosting sales. Thus the bigger the network, the better its chances of being at the top of the list of preferred visual discovery platforms by ecommerce companies. In that sense, Roposo’s ever expanding community of fashion lovers bides well for it.

By adding more categories such as travel, home décor, it will further deepen its reach. What is important is to focus on differentiating itself from the vast list of fashion discovery apps to stay at the top of its game and not end up as one in the list of many such discovery apps. How Roposo leverages technology to achieve this is something that will be worth looking out for, as it guns for the next 8 Mn users on its platform.