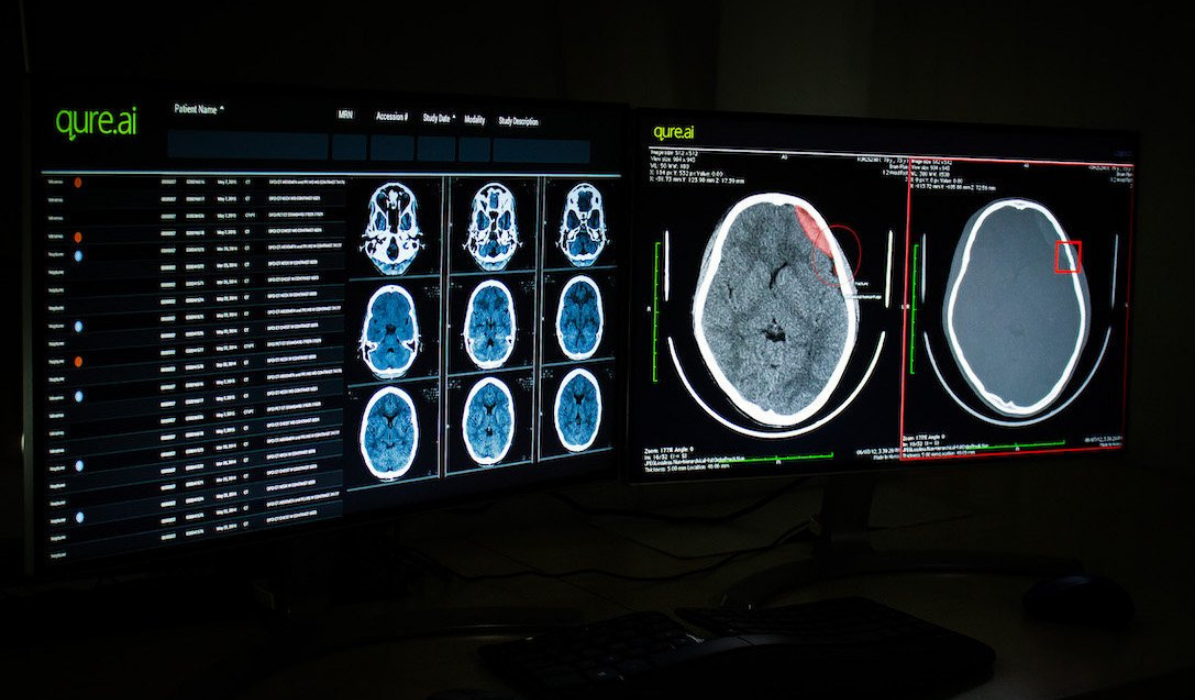 Everyone is talking about artificial intelligence (AI) as the technology that will revolutionise every aspect of human life. Often AI is used as a catch-all phrase to describe future technology, but its implementation and applications are much more diverse than that.

The use cases are expanding from customer service support, to online advertising, to smart home applications, self-driving cars, drones and a lot more. Arguably though, some of the most exciting work is being done in healthcare and medicine.

AI is not only helping scientists and researchers find cures through protein-folding to beat cancer or enabling gene editing through CRISPR models, but it’s also supporting the need for early disease detection, which is very crucial in preventive treatment.

AI is already being used to detect early stage cancer symptoms, more accurately than conventional methods such as human doctors peering over MRI scans and X-Rays, looking for anomalies. Machine-learning models and neural networks can help AI detect such anomalies in a fraction of the time taken by doctors. This is especially crucial in the Indian market, given the breadth of its population and the lack of intensive diagnostics in many remote areas.

With well over a billion people in the country, India has less than 10K radiologists. The skewed radiologists to patient ratio of 1:100K means early and timely disease detection is definitely a major challenge in the Indian healthcare market. Detecting diseases early is not just crucial for cancer and heart diseases, but also for infectious diseases such as tuberculosis, or hidden injuries like brain trauma and other disorders that need medical imaging. .

“The patient outcomes are highly dependent on the time taken to initiate treatment. Patients treated within 90 minutes from stroke caused by traumatic brain injury (TBI) onset have an increased odds of improvement at 24 hours and favorable  three month outcome compared to patients treated later than 90 minutes,” according to Prashant Warier, CEO of Qure.ai, which is working with Indian medical institutions and healthcare professions to enable AI-based disease detection for brain injuries.

Not only can it significantly impact the speed and efficiency of disease detection, it also frees up doctors to perform other interventions, instead of spending weeks studying reports and vitals.

“In the status quo, the productivity of radiologists is hampered since there’s no way of automated prioritisation which directly affects patient outcomes and mortality,” Warier added.

Mumbai-based Qure.ai aims to fill this gap by applying AI and deep learning technology to studying radiology images for quick and accurate diagnosis of diseases. The startup claims its algorithms can detect clinically-relevant abnormal trauma findings from X-rays, CT Scans and MRIs in a fraction of the time that doctors typically take.

The company claims to have used more than 7 Mn data sets to trained its AI algorithms, and has validated test  results and accuracy of its diagnosis at global institutions such as Stanford University, the Mayo Clinic, and the Massachusetts General Hospital.

Humans Behind The Machine

Incubated and backed with $30 Mn funding from analytics startup Fractal Analytics, Qure.ai was cofounded by AI scientist Pooja Rao and IIT alumni Warier in 2016. Warier, who also works as the Chief Data Scientist at Fractal, had earlier founded AI-powered personalised digital marketing firm Imagna Analytics, which was acquired by Fractal Analytics in 2015.

Warier has a PhD and an MS in Operations Research from Georgia Institute of Technology, while Rao, who heads R&D at Qure.ai, has a PhD from the International Max Planck Research School for Neuroscience focussed on neuroscience and machine learning.

Talking about the story behind the company name, Warier told Inc42, “Qure is a play on the word ‘cure’ and ‘ai’ stands for artificial intelligence. Our goal is to help bring better diagnostics and faster cures to millions of people worldwide through the power of AI and we wanted our name to convey that.”

Qure.ai’s model involves selling its diagnostic tools  directly to hospitals, collaborate with health-centric non-profits, and medical devices companies among others. It claims to have implemented its solutions in more than 12 countries including India, Philippines, US, France, Canada and some parts of Africa.

In India, the company collaborated with NITI Aayog, Piramal Foundation’s Piramal Swasthya initiative, and PATH NGO. Qure.ai’s chest X-rays solution has been deployed in Uttar Pradesh and Rajasthan where it claims to have reached more than 10K patients.

The chest X-ray tools have also been deployed at select primary health care (PHC) centres in Indian villages to speed up screenings of diseases such as tuberculosis screenings. India has the highest (28 Lakh cases in 2016) number of tuberculosis (TB) cases in the world, accounting for a quarter of the global TB cases.

“We have seen an increased adoption of our chest x-rays solution in countries with a high incidence of infectious diseases like TB (such as India). While the head CT solution is sought after in the emergency care units of developed countries,” Warier added.

The company claims that its solution takes less than three minutes to detect an abnormality with a 95% accuracy rate as compared to the traditional timing of at least 20 minutes.

With such advanced technology at play, there’s always a worry that AI-based solutions for disease detection and diagnosis would be out of reach for middle and low-income families.

According to Warier, Qure.ai’s  solutions are offered through cloud services with limited local computing requirements and also priced in a manner that “anyone, anywhere in the world can switch on access to quality radiology service via the solution portfolio.”

Qure.ai has chosen a pay-per-use model to monetise its solution, which allows low volume clinics and radiology centers in suburban and rural areas to utilise its solutions in an affordable manner. The company charges between $1- $5 per scan depending on the imaging modality.

To tackle pain points such as required computing power to run the AI algorithms, Qure.ai has managed to make its solution work on minimal hardware such as a $50 Raspberry Pi hardware kit. The solutions are also integrated with the 10 most-used radiology imaging platforms to ensure easy on-boarding of a radiologist, and wider penetration.

Despite these steps to increase adoption, Warier says the challenges for Qure.ai’s innovation are market resistance and gaining customer or patient trust. “For artificial intelligence to be widely accepted, it is essential that radiologists see the value and has confidence in the algorithm’s diagnosis. Thus, our solutions are far from being a black box, we enable interpretability by letting the user see why and where the AI algorithm has detected an abnormality,”he added.

Future of Healthcare in India

While Qure.ai is an Indian company, globally AI in healthcare is dominated by large conglomerates such as IBM and Google AI.

IBM’s Watson for Health has been using AI to swiftly review and store vast amounts of data such as medical journals, symptoms, case studies, from around the world — further it is not just about storing data, the intelligent product is also able to derive meaning out of this data. Further, Google’s DeepMind Health is also helping health professionals and patients by combining machine learning and systems neuroscience.

Despite the relatively lower prevalence of innovative AI solutions for the Indian market, the healthcare and medtech sector is expected to grow to a $372 Bn industry by 2022. Obviously, this means there’s a largely untapped opportunity for the healthtech startups globally, but as we have seen in other sectors such as ecommerce or ride-hailing or even logistics and delivery, having India-specific solutions or localised offerings will be the key to success.

Internationally, startups such as US-based Face2gene are working to revamp the healthcare sector. Face2gene has created a genetic search and reference application for physicians, which can scan through the images of a patient’s face and detect genetic disorders such as Down’s Syndrome. Another similar product is Belgium-based Diploid’s Moon, which enables early diagnosis of rare diseases.

According to Inc42 DataLabs estimate, more than 4,800 active healthtech startups are targeting this Indian market. In 2018, there was an overall increase of 45.06% in the total healthcare investments, with overall funding amounting to $504 Mn. But the focus of their efforts has been to improve access to doctors and hospitals and bring cheaper medicines to patients.

Healthtech companies that are using AI for diagnosis and disease detection are a rarity in India. Recently last month, Gurugram-based MyHealthcare had raised $3 Mn as part of its ongoing Series A funding round led by Sixth Sense Ventures. This was closely followed by another healthtech startup mfine which had raised $17.2 Mn in a Series B funding round from SBI Investment, SBI Ven Capital and BEENEXT among others. Another, New Delhi-based startup BeatO had also raised $1.6 Mn Pre-Series A funding round led by Orios Venture Partners this March.

Managing Partner at Orios Venture Partners, Anup Jain told Inc42 that AI in healthcare is helping startups to build a layer of convenience for healthcare management. He predicted that in future multiple use-cases such as pattern-based lifestyle changes, and insurance underwriting, can be built on top of big data which is being collected by existing healthtech services.

Warier also predicted a data-first future. He said ramped-up  adoption of medical devices and tools that continuously monitor and store data from the human body will provide more ways for healthtech companies to solve problems. Using big data, companies could teach AI systems to improve accuracy and the scope of predictions, and expand the use-cases from just disease detection to eventually preempt diseases, and even intervene in lifestyle choices that could eventually lead to harm in the long run.

For Warier and others working to infuse AI with healthcare, there’s no doubt that this technology has made it much easier to get to the root of diseases, without humans doing any of the heavy lifting. “This technology is rapidly breaking down barriers between tasks that require human expertise, and those that can be automated. They have the ability to learn from real-world feedback, and continuously evolve and improve over time,” Warier added.