Qupid Works The Same Way As Cupid Does, Fanning Your Love Flames

Qupid Works The Same Way As Cupid Does, Fanning Your Love Flames 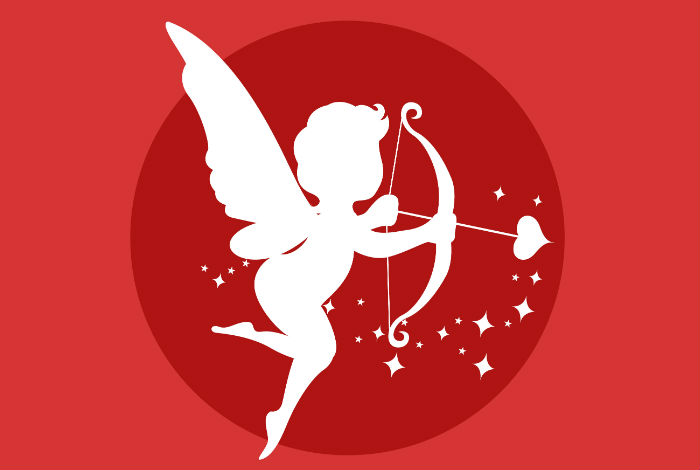 With the month of love around the corner, couples are looking around for different ways to celebrate this month with their better half. What if someone brought these couples a special gift? This is a gift which will strengthen their bond of love and give them a private space over the technological means of communication, the smartphone.

Recently, Qaiser Malik, the guy who got fame after getting hold of the PMO twitter handle, Nishchal Kesarwani, who has been into web development for past 7 years and Nikhil Kumar, owner of Trendsetterz IT services launched Qupid, an Indian application which aims to strengthen relationships in this fast paced world. Qupid, unlike any other messenger app creates a tunnel between two users i.e. it is an app which lets only two users to communicate. It provides lovers with a virtual private environment to talk without any interruptions. Even the singles can try their luck and send invitations to their crush.

The idea and the execution

The concept of this app originated from the fact that even after dozens of messenger apps available, there is a lack of privacy due to continuous distractions and interruptions. Hence, we fail to talk to the one we love in a more serene environment even virtually. To provide a virtual yet real-time one-on-one conversation, Qupid was introduced. Despite several other similar apps available for this purpose, Qupid focuses mainly on Indian users hence it has a more specific audience.

With Qupid on his mind, Qaiser met Nikhil who was already mentoring a few startups at that time. Nikhil was intrigued by the idea and readily agreed to mentor Qaiser and also invest in his startup. The first version of the app was developed three months later by Nikhil’s firm Trendsetterz IT services.

But what is it that makes the app stand out of the masses? As already mentioned that this app focuses on Indian couples, but there are several others doing the same, then why Qupid? Firstly, Qupid is a one to one interaction platform, so, it makes it impossible for anyone to find out about your activity and vice versa. Emotions can be expressed in a variety of ways, but when you are sitting on opposite ends of the globe, what do you do? You send ‘sensations’ commonly called virtual kisses and love-buzzes to spice things up with your partners. Date planners and notes provide an ease of planning day-outs and provides a list of the nearby hangout spots. Qupid memory lane is another interesting aspect which can save all the pictures and text sent over the feed. It is like a personalized relationship journal.

While on Qupid, you can only talk to a single person and are associated to him/her exclusively, but what if things go wrong? You break-up! Now that is sad ending to a beautiful love story, but maybe it was meant to be. You want to move over that person but the stingy memories won’t let go. Just delete your account and all the memories, the conversations and the images are gone forever, thanks to the in-built app lock. Now you can go ahead and start looking for the next one. 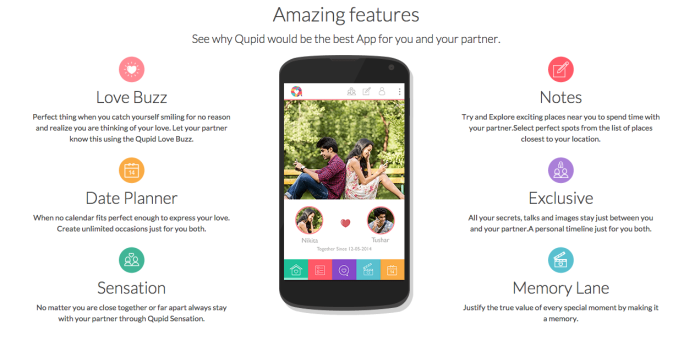 How far has the ‘Qupid’ struck?

With the majority of the Indian smartphone users lying between the ages of 18-34, Qupid has a vast scope of user database. Currently, Qupid has over 2500 downloads with around 2000 active users since its launch in October last year and has a long way to go before it can compete with apps like Avocado and Couple. The app has a team of 5 and about 75% of the traffic comes from India while the remaining one fourth is international traffic.

Considering that the concept of online dating and communication is comparatively new to the country, people in India are skeptical about registering on such a new platform owing to security and trust issues. So, getting people to put their trust in the app proved to be a tedious task but since all the information is stored in the device itself, it wasn’t very difficult.

While Android version of app is already out in the market, its iOS app is under development and Qaiser is looking forward to raising a certain amount of money for further development and entry into the ecommerce market.

The privacy that Qupid offers is a good reason to check out the app and its features seems attractive enough to give the app a try.