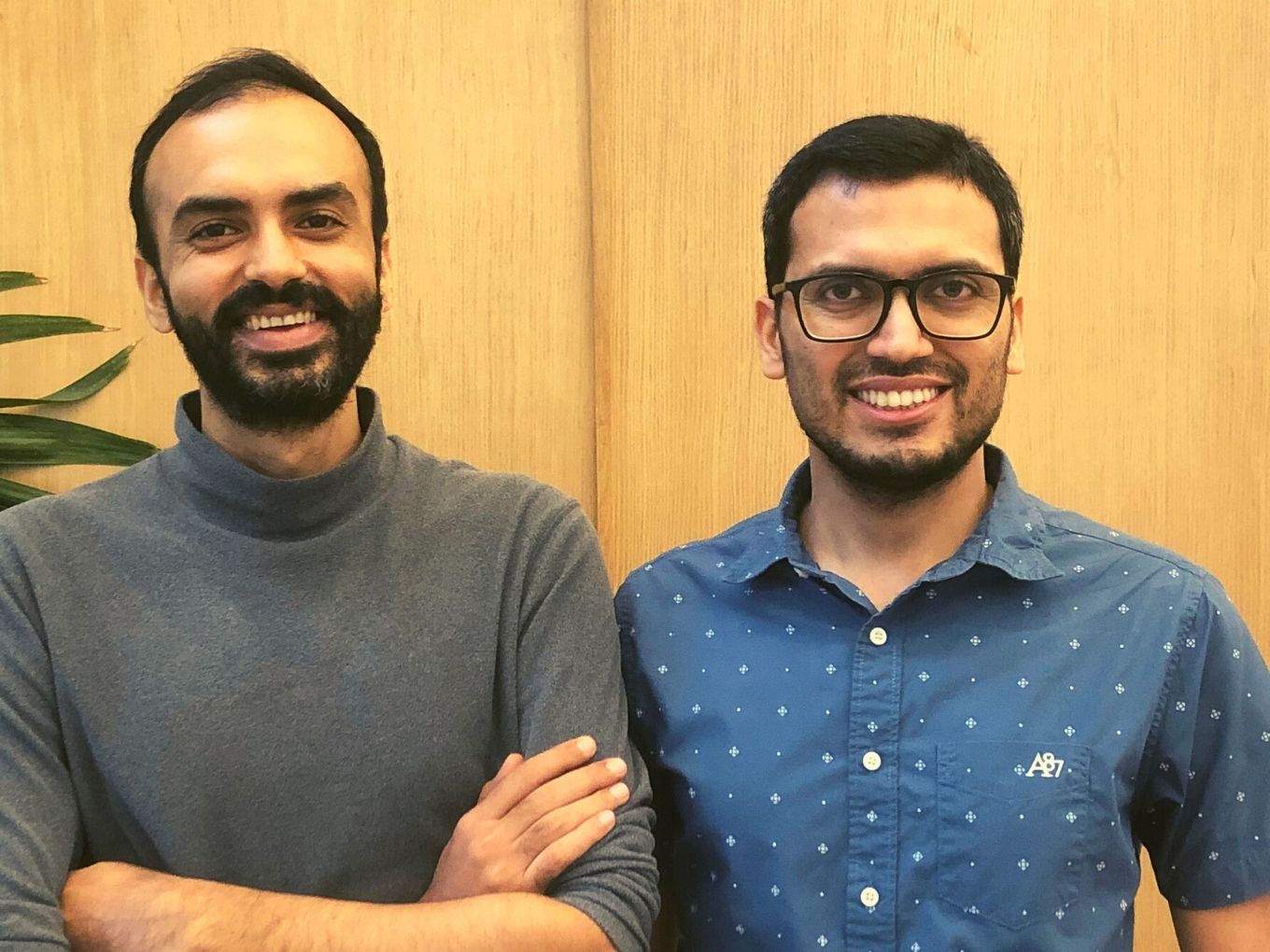 Businesses can get insurance premium quotes, customise plans based on employee needs and can opt in for extras to help reduce the premium in the long run

Competing with Acko, Digit Insurance and others, PlumHQ claims its solutions are ideal for SMBs given the cost savings for digital insurance

“We want to bring affordable health insurance to India’s missing middle sponsored by their employers,” says Abhishek Poddar, CEO and cofounder of PlumHQ.

India has a population of 1.3 Bn, of which the bottom 500 Mn poor and vulnerable population have health coverage through the various government schemes and Ayushman Bharat. Of the remaining 800 Mn, not more than 100 Mn would be able to afford health insurance on their own and these consumers have already opted for insurance through traditional players or digital insurance companies. That leaves the 700 Mn population uncovered — the missing middle that Poddar is referring to and the one that PlumHQ is targetting.

Beyond the huge addressable base, India has one of the lowest health insurance penetration levels, with only 18% of people in urban areas and 14% in rural areas covered under any kind of health insurance scheme, according to Poddar. However, uptake of health insurance products has been quite steady — by 2021, Oxford Economics projects revenue from health insurance premiums to reach $3.5 Bn, representing a growth rate of over 12% annually since 2006. Growth averaged just above 11% from 2006 to 2014.

Looking to solve this through workplace insurance, fintech startup PlumHQ is using technology to distribute and customise group health insurance and wellness plans that can be tailored to the specific needs of large corporations or startups.

The Bengaluru-based company was founded in November 2019 by serial entrepreneurs Abhishek Poddar and Saurabh Arora. Poddar’s earlier ventures were RentZeal, a marketplace to bring together consumers and small rental shops, and HyperTrack, a live location platform in the cloud offering developer tools. He is a Stanford Business School alumnus and worked on an earlier avatar of Google Pay as a product manager.

Arora, one the other hand, is a former product head of FreshWorks which he joined after Airwoot, a startup he had cofounded, was acquired by the SaaS giant. Prior to that he founded Filter.ly, a platform to filter over the information overload in a user’s social networks. Arora’s last venture was Startereum, a platform to decentralise innovation funding. 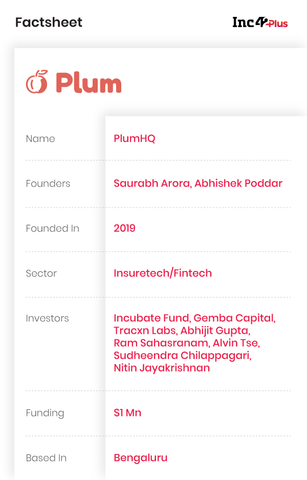 PlumHQ is primarily targeting smaller companies and startups that employ an estimated 150 Mn Indians. According to Poddar, small and medium scale enterprises (SMEs) in India are unable to provide insurance covers to their employees for two major reasons — firstly, there’s a lot of friction in the process as it takes around eight weeks for a company to purchase a policy from the time they decide to get one to signing on the dotted line. SMB owners generally have too much on their plate to wait out such a long gestation period. Second, most insurers might flat out refuse to sell a policy to a small organisation.

Cofounder Saurabh Arora, who looks after the product function at the company, believes that PlumHQ needs to solve a third pain point as well. He says there’s little trust and transparency in insurance purchases as the price of a cover might vary up to 70%-80% since middlemen, such as brokers, mark up the price tag to give themselves a fat cut.

Like other fintech platforms, PlumHQ offers an improved customer experience by creating touch points during the life cycle of the insurance cover, even though the policies are underwritten by insurers such as ICICI Lombard, New India, Religare, Max Bupa, among others.

Apart from insurance, PlumHQ offers wellness products like access to gyms, dental care, mental wellness tools, health checkups, access to mental wellness tools as well as therapists. For a cost of INR 500 per employee per annum, a company can also avail unlimited doctor consultations for its staff throughout the year.

A company can get price quotes in a minute by logging in to the website and entering simple details such as number of employees, types of families (spouse/kids/parents) to be insured, location and age bracket of staff. The lowest premium cost for a cover works out to be INR 999 per year per employee. For a company of 10 employees, this would cost INR 10,000 per year whereas purchasing a group cover for the same team size might cost anywhere between INR 1-1.5 lakh, Poddar claims.

However, two companies with the same requirements and employee count might not get the same premium amount as the cost varies with location. Inc42 tried out a sample case for Noida and found out that the premium amount for a basic cover would be INR 1,666 per year per life insured. PlumHQ responded by saying that it can be INR 1,000 for some cities and INR 2,000 for others. Variables like age, city, inclusions (of benefits), size of company and industry determine the final price point of a cover facilitated by the aggregator.

The claims process is entirely front-ended by PlumHQ and an employee under a group cover just needs to log in and fill in some details which Poddar claims is a 5-minute process. The rest of the legwork is done by PlumHQ at the backend through digitisation.

The Cost Of Insurance For SMBs

One of the biggest challenges while buying a health insurance policy is sifting through a sheaf of legalese to figure out what are the claims limits on hospitalisation for particular diseases and sub-limits on expenses such as hospital room rent, doctors’ consultation fee, ambulance charges, medical procedures such as plastic surgery, cataract operation, ligament reconstruction and more. Companies can go for a plan that has no sub limits like room rent limits, ICU limits, disease wise limits and more, which is not always possible with other providers.

“What happens a lot of times is pre-existing conditions, newborn babies, maternity etc are not covered by group policies. What we have done is extended these benefits that are generally available to an organisation with 1,000 plus employees and made it available to companies with even 7 employees,” says Poddar.

PlumHQ’s revenue sharing model with insurers depends on volumes as well as profitability of the overall business. Insurance regulator IRDAI has fixed the trail commission for web aggregators at 7.5% throughout the premium paying term. On top of that, there might be a reward structure based on the kind of business agreement with a particular insurer, says Poddar. For the other wellness products, the company has revenue sharing arrangements with partners such as 1mg which can return a margin in the range of 9-50% depending on several factors.

There’s a cap on intermediaries’ revenue streams from non-insurance activities. However, it doesn’t apply to PlumHQ. According to Poddar, “The cap is dependent on type of license. If you are a broker, you have that capping. We are a corporate agent, and hence have no capping.”

Road Ahead For Digital Insurance

“The market opportunity is as big as the size of India’s underpenetrated SME sector of 1.1 million businesses”, says Poddar. While PlumHQ offers policies for companies of all sizes, their product is focussed is on making group insurance accessible to small companies. According to the CEO, the primary challenge is how one builds a product, pricing, risk assessment and underwriting and getting the whole ecosystem to move with you.

The group health insurance is a segment where there has been no innovation in the last two decades, says Poddar. Even as a few segments of the insurance market such as retail life covers, motor insurance have seen some innovation thanks to fintech players such as Acko, Policybazaar, Digit Insurance, Poddar doesn’t see them as direct competitors.  At present, PlumHQ has over 150 clients. The Bengaluru-based insurance aggregator recently raised seed funding of INR 7 Cr in a round led by Incubate Fund, with participation from Gemba Capital and Tracxn Labs, apart from a few angel investors.

He says, “Policybazaar is an aggregator and it’s a good product for individual policies but it’s not a product built for companies — it will take you 60 days to buy a group insurance policy from them.”

Poddar says Acko and Digit Insurance are two digital insurance companies that are doing really interesting things. “They were initially built for retail covers and auto insurance but now they have also started health insurance and are looking into group insurance space. We are excited about what they are doing… Maybe PlumHQ shouldn’t be the only company in the space.”

In May last year, IRDAI had come out with draft regulations for the creation of a regulatory sandbox — the live testing of new products in a controlled environment where certain relaxations are allowed for the limited purpose of testing a fintech product. In January, it gave go-aheads to 33 proposals from a host of non-life insurance companies under the regulatory sandbox structure.

On plans for launching insurance policies themselves, Poddar tells us that no one besides Acko has received an underwriting license. However, it could be a possible scenario in the future after attaining a scale and being validated by the regulator. The startup aims to hit a total premium amount of INR 10 Cr by the 2020-end and INR 100 Cr by the end of next year.