In A Sea Of India-Centric Short Video Apps, Plop Looks To Go Global With Interactive Stories

In A Sea Of India-Centric Short Video Apps, Plop Looks To Go Global With Interactive Stories

While Plop is focussing on a global audience, the company is uncertain about its plans with regional language content for India

It claims to have seen an 800% growth in in-app purchases (IAP) during the lockdown, with 10% of its user base coming from India

Reading a good book allows one’s imagination to take flight, escape reality and forget about day-to-day troubles and that’s doubly true when it’s a great novel or work of fiction. But in these times of shorter attention spans and screen addiction, perhaps the Gen Z audience is not quite as passionate about reading as it is about consuming content. But this too has its upsides. With the proliferation of smartphones and app-based experiences, it’s not only easier to make stories richer on mobile than just text, but it could also be the only way to keep young readers engaged.

Banking on this is Mumbai-based media and entertainment platform Plop Chat Stories that is powering mobile-first interactive and immersive storytelling experiences with choose-your-adventure style narration.

When it comes to multimedia content, there’s no dearth of apps or internet platforms dedicated to this. However, Plop is betting on the bite-sized nature of its stories to attract young readers. It’s no secret that attention spans have fallen in the past few decades with the proliferation of internet devices. According to the Institute of Business Management, roughly 75% of Gen Z use a smartphone over computers and other devices. In another study, Gen Z is gaining interest in interactive and ‘choose-your-own-adventure content, with 55% saying they’d like to be able to choose the plotline of the movie or TV show they are streaming.

When it comes to the mobile bite-sized content market, Plop Chat Stories competes with the likes of Postype, Everyst, Fan Fiction, Archive of Our Own, Soundview, Nojoto and others. In addition to these, Indian publishing startups and content houses such as Pratilipi, Terribly Tiny Tales and others are also leveraging digital platforms to offer readers the options to read short-form fiction and self-published novels.

But unlike most text-dominant platforms, Plop Chat Stories relies on text, video, audio, conversations, simulations and role-playing to reimagine storytelling and offer readers a bigger dose of interactivity, at the cusp of reading and gaming. “The basic foundation of our platform is to marry the written words with other components of media which are native to the smartphones, thereby making the story really come to life,” Anushka Shetty, cofounder of Plop Chat Stories, told Inc42.

Founded in January 2019 by Anushka Shetty and Vineet Shetty, Plop Stories focusses on smartphone-based immersive and interactive stories. Not only does Plop produce its stories or Plop Originals, but it also enables creators to dabble with interactive content and monetise it. “Growing up, the joy of reading is replaced with the joy of texting, pinging, snapping, posting, tweeting and so on. This thought prompted us to create a platform that merges the ancient art of storytelling with the millennial art of texting,” said Anushka, recalling the initial days of Plop Chat Stories. 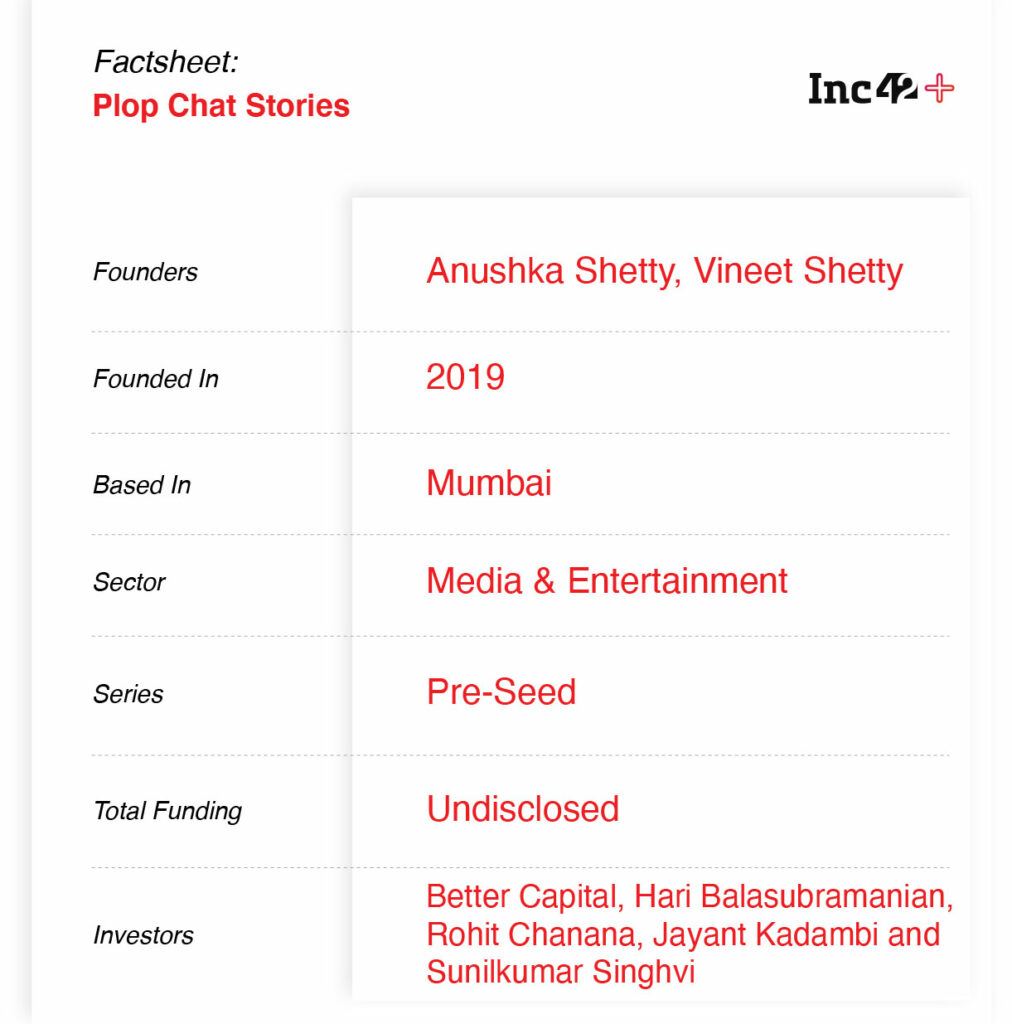 Just like most interactive games, stories on Plop progresses based on the user’s choice. If a character in the story has been kidnapped, the reader will receive a video or an audio call from the ‘kidnapper’, and they will have the option to direct the story based on their actions and decisions.

Vineet added that while reading gives you the freedom to imagine the entire setting, motion pictures leave nothing to your imagination. Weaving multimedia in the middle of a story in a chat-like interface gives Plop a unique advantage of providing just the right kind of cues to spur the reader or user’s imagination.

A quick look at Plop’s reviews on the app store showed mixed reactions among the users — while some said it is ‘Netflix for books,’ others termed it as scary and a nerve-wracking experience because of the believability of conversations on the chat-like interface

“The chat-like interface is so easy to use to most of us that it takes away the friction usually associated with reading on a digital medium,” Anushka added.

Exposure to digital content among young Indian users is very high and this is one of the key factors responsible for reducing users attention spans drastically, thereby making reading, which is mostly words with no colour or motion, extremely unattractive to the young generation. Research suggests that on average humans have a seven-minute attention span, which means that the flow of activity is easily broken. And Plop is not looking to change this, but is actually capitalising on it. 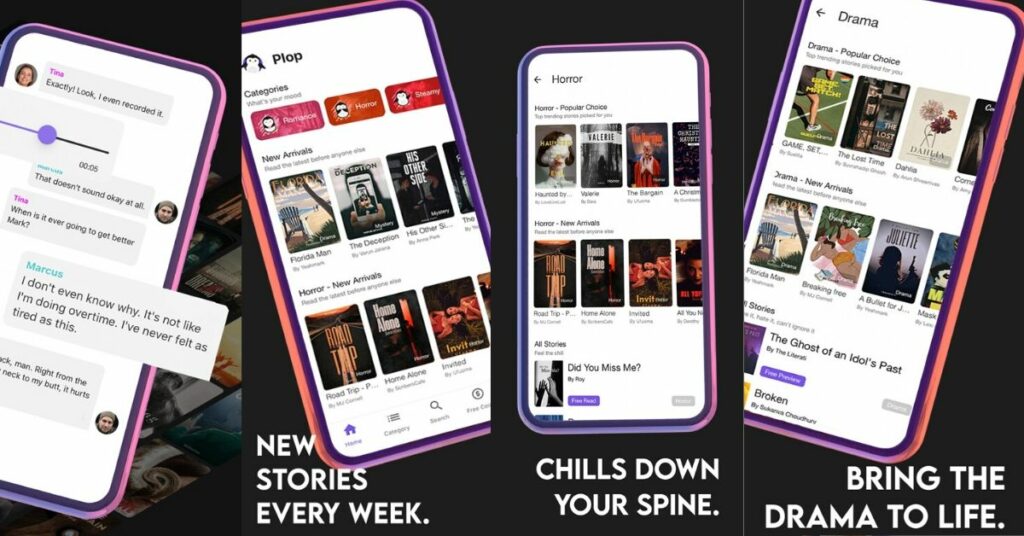 Initially, incubated and funded by IIMB startup incubation centre, and also part of the Goldman Sachs startup programme, Plop claims to have over hundred creators across the globe making interactive stories. “These creators are growing and working towards making their own brand on Plop and acquiring their own fan base, which allows them to make as much as a couple of hundred dollars every month,” claimed Anushka.

Further, she said that, on average, users spend about an hour on the app each day reading through their favourite genres — horror, thrillers and romance. “The most loved genres are romance and horror,” she added. Plop boasts around 400 stories today and the company claims to have scaled up from 20 in a matter of three to four months.

Anushka said that its primary users are of the age group between 18 to 35. This is the age-group which shows the lowest numbers in terms of traditional paper-back or Kindle consumption, as per the company’s research.

Overall, Plop claims to have about 1 Mn active users, with most coming from North America (50%), followed by Europe (20%) and Asia (20%). Around 10% of its user base is from India, which is one area that Plop has to pull up. With such a huge audience base of Gen-Z users in India, Plop needs to tap the Indian market through regional language content and more diversity in narratives. The company declined to comment on focussing on Indian languages and localisation to gain more traction.

During the lockdown, the startup claimed to have seen a 400% rise in the user activity especially from the US and the UK, and 20% from India. The lockdown has also been great from a revenue point of view with 800% increase in in-app purchases (IAP), which range from INR 30 to INR 350, and aggressive growth in the number of writers and creators. Given that content monetisation only began in March 2020, these numbers need to be taken with a grain of salt and long-term growth in terms of IAP will determine success. But beyond this Plop did not reveal details such as total revenue till date or even how much it is spending to acquire users. It claimed that it is primarily using word-of-mouth marketing to build the user base.

Growing 25% month-on-month (MoM), Plop is expecting 10x growth in the revenue and user base in a year’s time. Currently available on Apple App Store and Google Play Store, Plop Chat Stories earns revenue from subscription and a ‘pay per read’ model, where most of its in-app purchases are between INR 30 to INR 350.  The company claims to be adding new users via word of mouth publicity, shared Anushka.