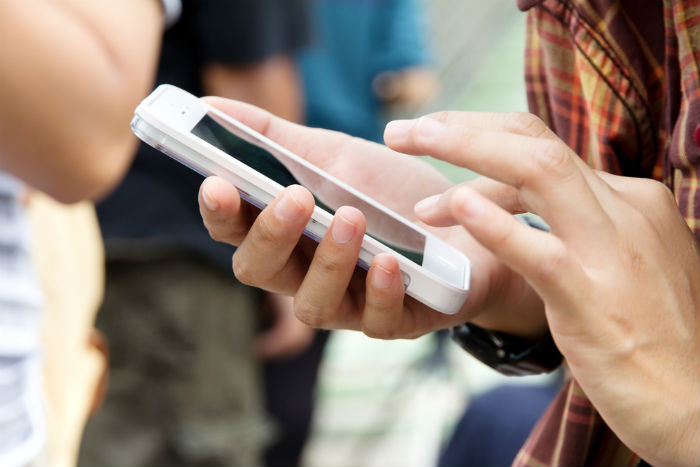 When was the last time you wanted to send an email to a friend but had to look around for the email id? Wouldn’t it have been convenient if you could just text message him or send it to his phone? Well, there is now an app which allow you do that. NoMyID is a mobile application that enables its users to send emails to a mobile user without the need of the email id.

Aman Sikka, a banker by profession has been an enthusiast of finance and technology and he co-founded NoMyID along with Rajula Sikka. Rajula is a fine arts lover and has an experience of over a decade in the field of creative arts and education.

The app uses a powerful email client and provides a variety of features. These features include the option to send messages/video/images to contacts with live chat and push notifications. Currently, available on the Android and iOS platform, launch of its windows platform version is under development.

Several times we feel the need to share important information with people. These people include our relatives, clients, colleagues and even mentors. But, mobile numbers are easily accessible and we prefer contacting someone on phone rather than their email ids. Hence, due to unavailability of the email ids it becomes difficult to share detailed information which includes individual profile, company background, useful offers, news and even regular communication. This triggered the idea behind NoMyID which enables users to send emails over mobile numbers rather than email ids.

There is no specific target audience for the app and anyone can use this app. This includes corporates, customer care services, general service industry and even regular communication. The email is the most convenient way of communication and plays an important role in every market; hence, it can target any group of audience. The overall response, according to the team, has been very good and people are using it for regular communication.

The basic aim of the app is to eradicate the need for email ids for any sort of communication. Using this application, one can send emails without the need for an email id. It uses a powerful email client which provides one with all the common features used by an email service, the only difference being the fact that it uses mobile numbers instead of long ids.

What else to offer?

The app is focused on changing the email communication system by replacing the ids with mobile numbers. Currently, the app is being tested in a close network and has received approximately 1500 downloads. The bootstrapped startup currently has not received any funding but the founders have plans to raise funding for further expansion and technological advancements.

The team of 10 working on this project has defined a basic monetization model for this app which basically relies on the Ad network and mobile marketing. Following a very simple structure, the marketing strategy for the project has been outsourced to PRoact BrandComm and is based on digital platforms which include services like Google ads, Facebook ads and Inmobi ads.

Since the whole concept has been freshly introduced, there is no other player providing similar services. The app also includes a chat feature which supports communication in real-time, hence one of the major challenges which the team faced was to integrate the email and the chat platform in a single app. This complicated things a little but finally lead to a well-developed app with both the features.

Apart from simplifying the user interface and improving the system compatibility, which every app maker works on with every update, the major changes which can be seen in the future include addition of support for landline users which will allow mails to be sent on landline numbers as well. The team is also working on support for chatting and calling to the non-users of the app.

Even though NoMyID has a different concept and in the long run can be seen as an alternate for email ids, however, one needs to keep in mind that there are several communication apps like Whatsapp and Hike which let you send long messages and files too. The app might eradicate the need to share long email ids and replace them with a ten digit number which is easier to get access to, but the other side needs to be kept in mind as well. With proper investment of funds and time, the technological advances can lead to the development of the next generation communication system making things simpler for us.